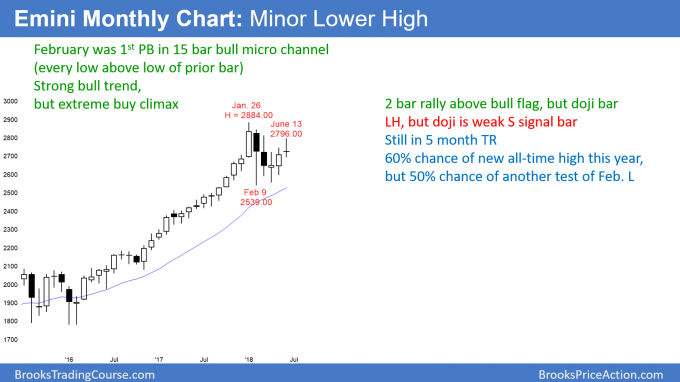 The monthly S&P500 Emini futures candlestick chart in June was a doji bar. It is therefore a neutral bar and a low probability sell signal bar for July. The bull flag now has 5 bars.

The monthly S&P500 Emini futures candlestick chart has been forming a bull flag for 5 months after a buy climax in a strong bull trend. The bulls hoped that the past 3 months was a resumption of the bull trend. However, April was a doji and therefore a weak buy signal bar. While May was a bull bar, it had a tail on top and it did not close above April’s high. Finally, June was a doji, which is weak follow-through buying. Hence, the 3 month reversal looks more like a bull leg in a small trading range than a resumption of a bull trend.

Since June closed near its open, it is a neutral bar. Because it closed below its midpoint, it is a sell signal bar for July. However, a doji bar is a low probability sell signal, especially in a strong bull trend.

But, the 15 month buy climax on the monthly chart was the most extreme in the 100 year history of the stock market. Therefore, the pullback could last several more bars. For example, the monthly chart has been above its 20 month EMA for over 2 years. Since this is an unusually long time, June might be the start of a 2nd leg down to test the 20 month EMA. If so, the bull flag could continue for several more months. 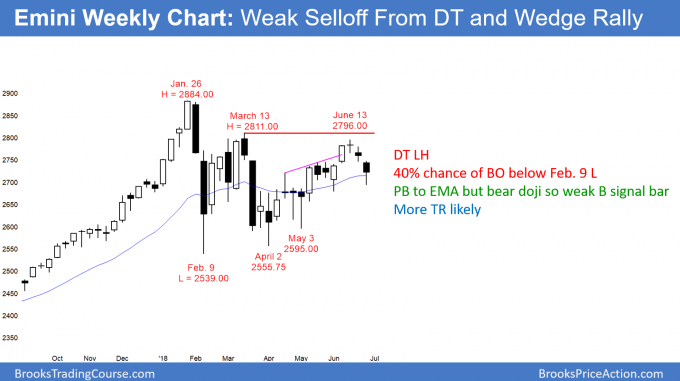 The weekly S&P500 Emini futures candlestick chart formed a double top 3 weeks ago with the March lower high. In addition, the rally since April had 3 legs up and is therefore a wedge. However, the reversal down so far has been weak. This week was a bear bar this week, but it closed far above its low. Also, the 3 week selloff does not yet have consecutive big bear bars closing near their lows.

January ended the most extreme buy climax on the weekly chart in the 100 year history of the stock market. Since the pullback on the weekly S&P500 Emini futures candlestick chart has lasted about 20 weeks, it is more accurate to refer to it as a trading range instead of a bull flag. Once a pullback lasts 20 or more bars, the chart has become close to neutral. While the odds ultimately favor a rally to a new all-time high, there is now a 40% chance of a bear break below the trading range before a new high.

Trading range always means both a bull and bear trend

When the Emini is in a trading range in a bull trend, it is always also in a bull trend and a bear trend. The past 2 weeks sold off from a wedge rally to a double top with the March high. This is therefore the early stage of a bear trend. If the selloff continues down for a 300 point measured move below the neck line of the double top, traders will say that the bear trend began in January or with the May lower high.

On the other hand, if the Emini fails to break below the 5 month trading range before making a new high, the bulls will say that the bull trend resumed with the April low test of the February low.

Trading ranges have at least 2 legs up and 2 legs down. They often have many more. Since markets have inertia, the resist change. Therefore, most breakout attempts fail and reverse, and the trading range continues to add more bars. One of my many rules is that there is no breakout until there is a breakout. A successful breakout usually has at least 2 consecutive big trend bars closing beyond the range. Anything less is more likely to reverse than to grow into a trend. 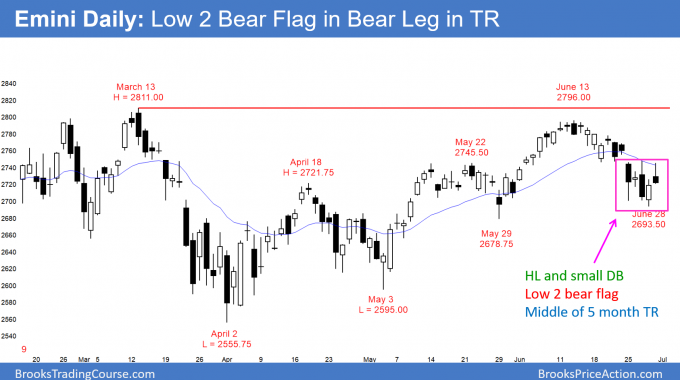 The daily S&P500 Emini futures candlestick chart has been in a trading range for 5 months. This week had a small reversal up from a 4 day double bottom. But Friday was the entry bar for the bulls and it was a bear reversal bar. Hence, Friday became a Low 2 sell signal bar for next week.

However, the daily chart is a trading range and not a bear trend. Consequently, there will probably be more buyers than sellers not far below the May 29 low. That will probably limit the selloff from below Friday’s small bear flag to just a few days. There will likely be a reversal up from below May 29 low. The bulls will then have a 2 – 3 week rally. There is no sign yet that the 5 month trading range is about to end.

The bulls want a break above the March and May double top. However, a wedge top usually has a 2nd leg down. Therefore, it is more likely that any rally over the next couple of weeks will turn down from a lower high. The bears will see that as a lower high major trend reversal. However, the reversal down will probably be minor and lead to more trading range, not a bear trend.

Trading ranges are constantly forming tops and bottoms. My 80% rule says that 80% of breakout attempts in a trading range will fail. Consequently, it is better to look for reversals than breakouts. When there is a clear, strong breakout above or below the range, traders will once again be willing to hold onto positions for more than a few weeks.

The 2nd half of my 80% rule is that trends also have inertia. That means that 80% of trend reversal attempts will fail. It is therefore better to expect a reversal to fail and for the trend to resume.