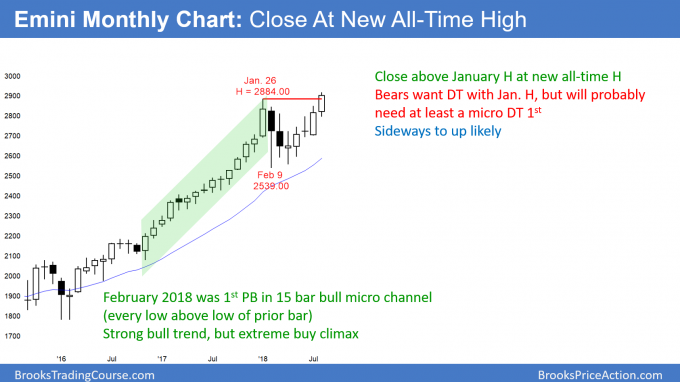 The monthly S&P500 Emini futures candlestick chart had a bull trend bar in August. Furthermore, August closed near its high and above the January high. It is resuming its bull trend.

The monthly S&P500 Emini futures candlestick chart has rallied for 5 months after a brief pullback from a 15 month buy climax. This month’s close at a new all-time high increases the odds of higher prices.

There is always a bear case. However, after 5 bars up, the odds of a big reversal down are small. The bears would typically need at least a micro double top, which would take at least 2 more months. Less likely, if September was a huge bear month, it could lead to a test down to the February low. Therefore, the odds favor sideways to up trading over the next few months. 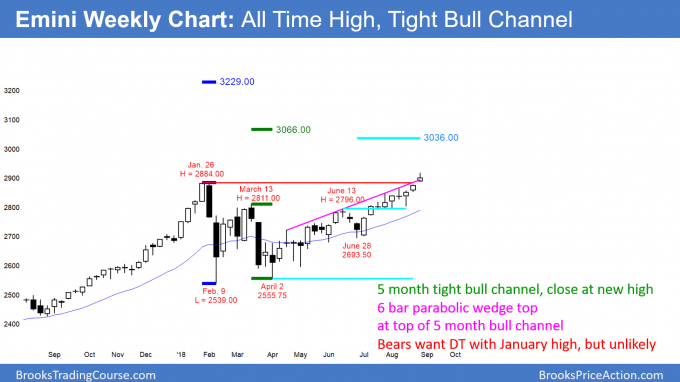 The weekly S&P500 Emini futures candlestick chart gapped up above the January all-time high this week. In addition, the bull trend has been very strong for past 2 months. However, this week was a small bull doji, which is not a strong breakout bar. But, it is also a weak sell signal bar for next week.

The weekly S&P500 Emini futures candlestick chart gapped up to a new all-time high this week. Because the 9 week bull channel is tight, the odds favor higher prices in September.

There have been 3 pushes up over the past 6 weeks. This is a micro wedge top. Furthermore, this week was a small bull doji bar. Since it is not a big bear bar, it is a weak sell signal bar for next week. However, the bears still want a failed breakout above the January high and a reversal down.

For example, if the bears close the gap below this week’s low, the gap would be an exhaustion gap. Alternatively, if the bears get a gap down at any point over the next few weeks on the weekly chart, there would be an island top. Any strong reversal down would create a higher high major trend reversal with the January high.

But, the past 9 weeks have been in a tight bull channel. A reversal down from here would therefore more likely be minor. That means 1 – 3 weeks down into a bull flag, or a month or two of trading range trading. In either case, the odds favor higher prices.

The weekly chart is breaking above an 8 month trading range. This will make traders look for the rally to reach measured move targets above based on highs and lows in the range.

The bears had a strong reversal down in February. They want the breakout above the January high to fail. Then, they want a break below the February low and a measured move down to 2194.00. While this seems unlikely now that the Emini is at a new high, there is no strong bull breakout yet. The bears therefore still have a 30% chance of a selloff to far below the February low before reaching the targets above.

The Emini does not have to reach any of these bull targets. But, traders and computers see them. Therefore, unless there is a convincing reversal down, the bulls will buy pullbacks until the rally reaches around those bull targets. They then will either take profits, look for new, higher targets, or sell a reversal down. At the moment, the momentum favors higher prices. 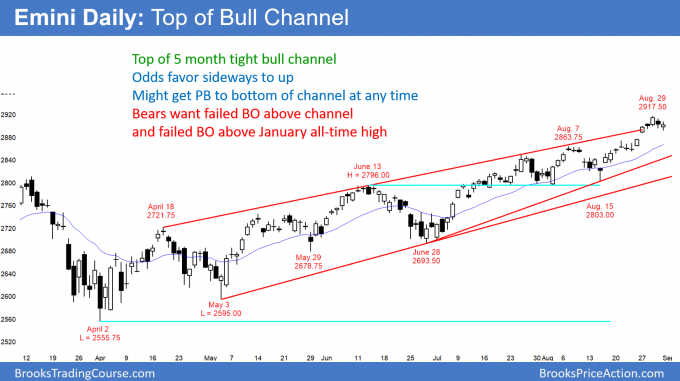 The daily S&P500 Emini futures candlestick chart has been in a bull channel since the April 2 low. Bull channels have bull legs and bear legs. The bulls are hoping to create a successful breakout for several weeks above the bull channel. Then, instead of a bear leg, the market cycle would start over.

Most breakouts above bull channels fail

A bull breakout above a bull channel typically fails 75% of the time within about 5 bars. The bears then get a sideways to down leg to the bottom of the channel. There are usually different ways to draw the channel lines. The nearest reasonable bull trend line for the bull channel that began in April is around 2850. But, the current breakout attempt is also a breakout above an 8 month trading range. Therefore, the odds of a strong rally from here without much of a pullback are about 50%.

The Emini had a weak reversal down this week from above the top of the bull channel. The bulls hope that this is a pullback and that the rally will resume next week. The odds favor the bulls.

The bears want a 1 – 3 week selloff to the 2850 bottom of the channel. Then, they want a break below the channel, and a bear trend. At the moment they have a 50% chance of achieving their goal of a pullback to 2850 before the rally goes much higher.

Next week’s behavior will give more information. If the bears get consecutive big bear bars or a gap down, the odds will shift in favor of a test down to 2850. Alternatively, if the bulls can prevent a selloff, the odds will favor a resumption of the 3 week rally up above 3,000 to the measured move targets.