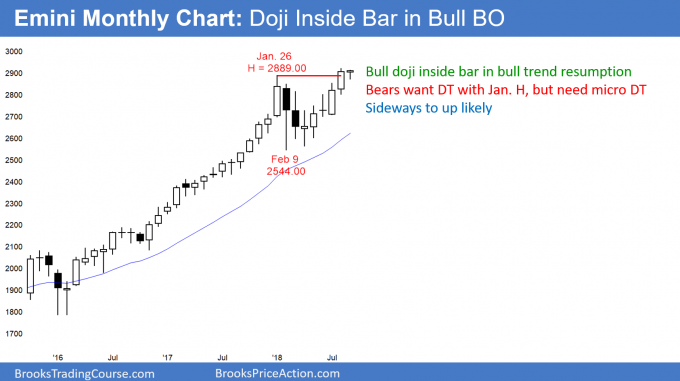 The candlestick on the monthly S&P500 Emini futures chart is a doji inside bar so far in September. The 6 month rally is likely to continue.

The monthly S&P500 Emini futures candlestick chart is having strong trend resumption up after the February selloff and then 2 sideways months. Because 2017 was so climactic, the current rally will probably stall within a few months from a 2nd exhaustion. The measured move projection based on the height of the February pullback is 3234.00 (see weekly chart). Their are other lower targets as well.

Since the 6 month rally is strong, the bulls will buy the 1st pullback. Consequently, the downside risk over the next couple of months is small. 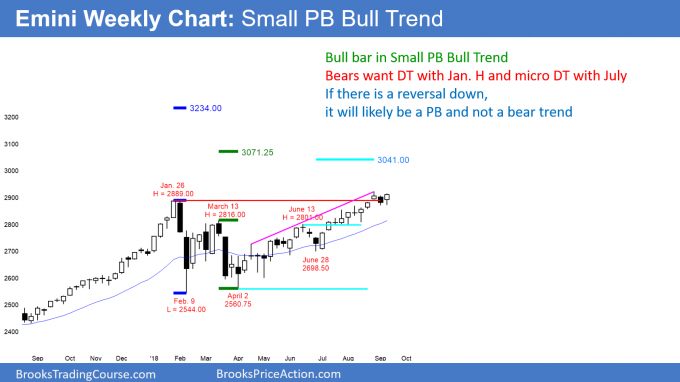 The weekly S&P500 Emini futures candlestick chart has rallied in a tight bull channel since the April low. In fact, every pullback since January ended in 1 – 3 weeks. There is no reason to believe that the current pullback will be different. The odds favor higher prices.

The weekly S&P500 Emini futures candlestick chart has been rallying in a tight bull channel since the April double bottom with the February low. While last week was a sell signal bar for a failed breakout above the January high, any reversal was likely to be minor.

This is because the 6 month rally is a Small Pullback Bull Trend. That is a strong bull trend and reversals typically only last 1 – 3 bars. The bears usually need a strong minor reversal down and then some type of a double top before they can create a trend down.

Because last week was a bear bar, it was a weak buy signal bar for this week. That increases the chances that there will be more sellers than buyers above its high. If so, next week could reverse down. That would form a micro double top, as well as a higher high double top with the January high. Traders would then look for a 1 – 3 week pullback.

1st trend reversal down will likely be minor

If next week reverses down, it will form a micro double top with the high from 2 weeks ago. The bears would then have a 40% chance of a test down. A reasonable target is the 20 week EMA, which is just above 2800.

But, because the 6 month bull channel is tight, the bulls will buy the selloff. Their buying would likely lead to another all-time high. The odds favor a test of the measured move targets around 3100 and 3200 over the next several months (see the chart). 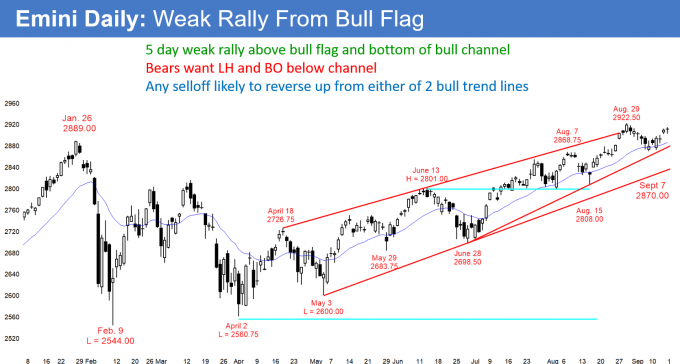 The daily S&P500 Emini futures candlestick chart rallied this week after a 2 week selloff. However, the rally is weak and Friday is a minor sell signal bar for next week.

The daily S&P500 Emini futures candlestick chart has been in a bull channel since the April low. But, the 5 day rally has been weak. Since Friday has a bear body, it is a sell signal bar for Monday. The big tail at the bottom of the bar lowers the probability of a selloff. The bears will probably need a better sell signal bar next week before traders will sell.

The bears want a lower high major trend reversal (compared to the August high). Since the 6 month bull channel is tight, any reversal here will probably be minor. However, a minor reversal could last several weeks and fall to support at around 2800.

The importance of a major higher low

The bears need a strong reversal down to below the bottom of the bull trend channel. More importantly, they need a break below the most recent major higher low. The is the June 28 low of 2698.50. While the August 2 low of 2800.00 is important, it came after just a couple medium size bear bars in a tight bull channel. It is therefore minor. That means that a selloff to below its low would not end the bull trend.