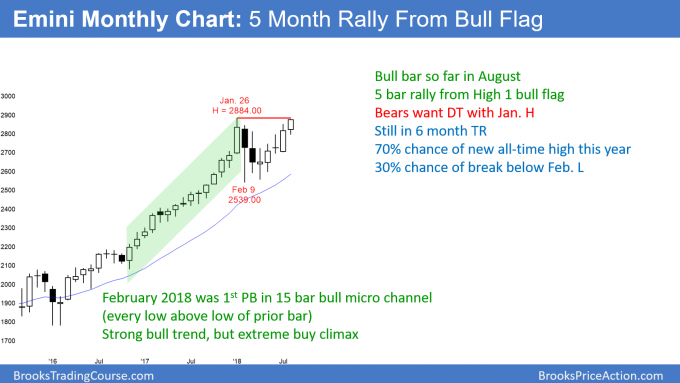 The August candlestick on the monthly S&P500 Emini futures chart so far is a bull bar. The bears want a double top with the January high, but the odds favor a new all-time high soon.

The monthly S&P500 Emini futures candlestick chart is resuming its bull trend from 2017. Although the cash index made a new high this week, it was only by $3. However, the momentum up in the Emini is strong. Therefore, the odds favor a new all-time high next week.

The 2017 bull trend is strong enough to make a bear trend reversal unlikely. Even if the Emini reverses down from a double top, the bulls will likely buy the selloff. It therefore would probably last only a month or so before the rally resumes. 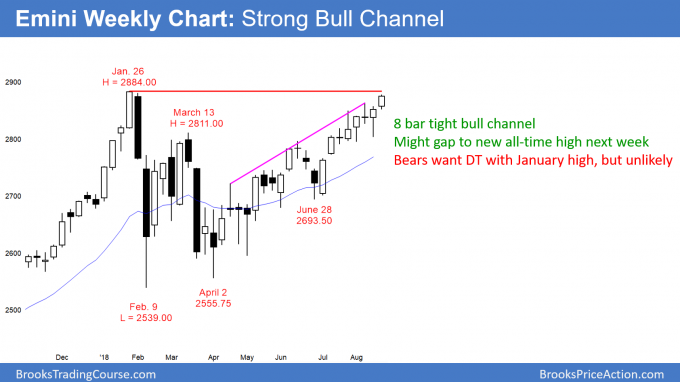 The weekly S&P500 Emini futures candlestick chart this week got to within 6 points of the January all-time high. In addition, the week closed on its high and the 8 week bull channel lacks strong bear bars. The odds favor a new all-time high next week. The rally is strong enough so that the Emini might even gap above the January high.

The weekly S&P500 Emini futures candlestick chart rallied strongly for 8 weeks. There were no big bear bars in the rally. That lack of selling pressure makes a trend reversal unlikely. The best the bears will probably get is a few weeks of sideways to down trading.

The 5 month bull trend resumption is strong enough to make a new all-time high likely next week. This week closed on its high just below the resistance of the January high. Therefore, Monday might gap up to a new all-time high next week. Whether or not it does, if next week is a big bull trend bar, the odds are that the rally will continue up over the next several months to the measured move targets around 3100 and 3250. 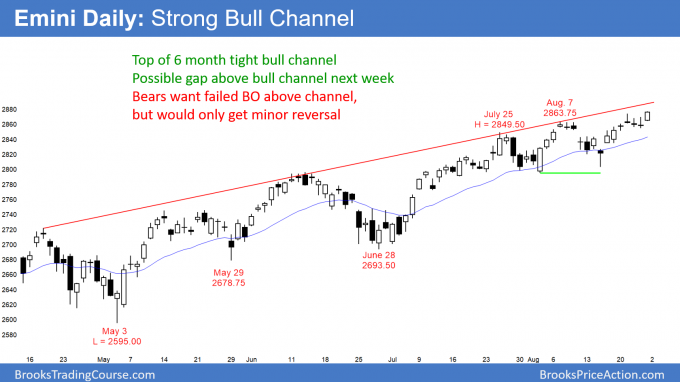 The daily S&P500 Emini futures candlestick chart has made 3 pushes up since July 23. The rally is therefore a wedge top. However, the 5 month bull trend is strong enough to make a new all-time high likely next week.

The rally on the Emini daily chart since the June 28 low is very strong. Friday closed on its high, and Monday might gap up. A big gap would create a gap above the January all-time high. If Monday is a big bull trend day, the Emini could quickly reach the measured move targets around 3100 and 3250.

Because the daily chart is still in an 7 month trading range, there is a 50% chance of a test down to the middle of the range at around 2700 before reaching the 3100 target. Furthermore, there is a 40% chance of a test of the bottom of the range at around 2550. Finally, as unlikely as it might seem, the bears have a 30% chance of a break below the range and a measured move down. That would be a 20% selloff down to around 2200. However, the bears need to create a series of big bear bars closing near their lows, which is unlikely. Unless they do, the odds continue to favor higher prices.

Measured move targets for the bulls

There are different ways to create measured move targets for the bulls. Using the February low and the January high, a measured move up would be around 3250. There was a double bottom with the February and April lows. The March high is the neck line. The measured move projection is just below 3100. Finally, the 3,000 Big Round Number is a less important psychological target.

Does the Emini need to hit any of these target before falling 10 – 20%? Of course not. But, the momentum up is strong enough to make higher prices likely. These are targets that traders think are reasonable.

The bears see a month-long wedge top at the January high. A reversal down from here would therefore be a big double top in addition to the small wedge top.

But, the bull channel from the June 28 low is tight. Furthermore, there have not been many big bear bars and therefore there has not been significant selling pressure. As a result, a reversal down might have a couple legs and last a couple of weeks, but a major reversal is unlikely. There is support at 2800, which is the June high and the July low.