The monthly S&P500 Emini futures candlestick chart has a doji bar so far this month. Last month was a buy climax at measured move targets and the 2400 Big Round Number.

The monthly S&P500 Emini futures candlestick chart is in a strong bull trend. Yet, it is at important resistance. The 2014 – 2015 trading range came late in a bull trend. Hence, it is probably the Final Bull Flag. Therefore, bulls will take profits around a measured move up. Furthermore, bears will begin to sell. Because this is rollover week, the targets are a little different from last week.

Since there are usually several possible lows and highs to use to create measured move projections, the final target is never clear. Because the highs of the 2 year trading range were close to one another, and the lows were close as well, the measured move targets are in a tight cluster. In addition, that cluster is around the 2400 Big Round Number.

The year long rally has been in a tight bull channel. In addition, the past 4 months have been a Buy The Close rally. These are therefore signs that the bulls are strong. Hence, they will probably correctly see the 1st reversal down as minor and a likely bull flag. Therefore, the 1st reversal will probably not last more than a bar or two before the bulls buy again.

Yet, once the bull trend resumes, if is fails again, there would then be a double top. Furthermore, since it would be in a buy climax at major resistance, it would have a better chance of leading to a major reversal.

If the double top is only a few bars, then it would be a micro double top. If a major reversal follows a micro double top, the selloff is usually not sharp. Instead, the market often goes sideways to down for 5 – 10 bars. This allows the bears to create the selling pressure that they need to begin to take control.

If the 2 tops in a double top are 10 or more bars apart, the reversal down can be more abrupt. This is because the bears have already demonstrated strength during the 10 bars between the 2 tops.

The weekly S&P500 Emini futures candlestick chart is far above its moving average. In addition, it broke below a 6 bar bull micro channel this week. Even though this week had only a 2 tick tall bear body, it was the 1st bear bar in 10 weeks.

The bull case is weak near-term

Can the bull trend simply continue without pulling back? That is unlikely. Yet, if the market goes sideways for 5 or more weeks, it will be close to the moving average. Hence, bulls might begin to buy again. But, there is still resistance at the 2400 area created my several measured move targets. In addition, the 2 year trading range late in the bull trend is probably the Final Bull Flag. This also makes a big rally from here unlikely without a pullback first. 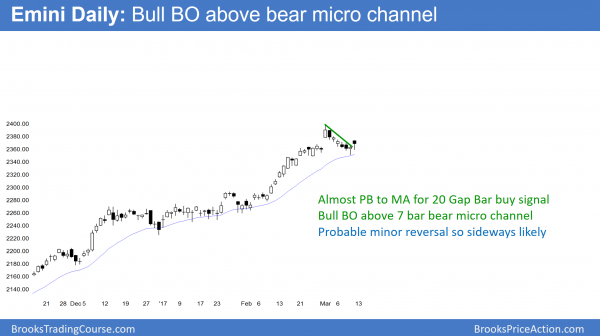 The daily S&P500 Emini futures candlestick chart pulled back almost to the moving average this week. Yet, it did so with a seven bar bear micro channel. Therefore, the bears are strong. Hence, sideways is more likely than up for the next few days.

The daily S&P500 Emini futures candlestick chart pulled back to just above the moving average on Thursday. Since a 20 Gap Bar buy signal requires a touch of the moving average, Friday’s break above Thursday’s high is a lower probability buy. In addition, it followed a 7 bar bear micro channel. That is a sign of strong bears. This therefore creates a Big Up, Big Down pattern. Hence, there is confusion. As a result, the market usually goes sideways.

The gap up two weeks ago was huge and therefore significant. In addition, the strong reversal down on the next day and the 7 day bear micro channel are signs of strong bears. Yet, why haven’t the bears been able to create a big gap down? It is because they are not yet strong enough.

Island tops and bottoms sometimes have 20 or more bars. Therefore any gap down over the next week would create an island top with the gap up from 2 weeks ago. Wednesday’s likely Fed interest rate hike could be a catalyst that leads to a gap down on Thursday or Friday next week. If the gap is big and the gap down day is a big bear trend day, traders will begin to believe that the 5% correction has begun.

The Fed meets on Wednesday and it will probably increase interest rates. Since traders already know this, that is already incorporated into the current price. What traders do not yet know is the statement that comes with the rate hike. If traders sense that the Fed might raise rates faster and more often than they previously assumed, they will reprice the stock market downward.

Low interest rates and heavy government borrowing were the major reasons for the rally over the past 10 years. If traders believe that the government will now raise interest rates, investors will then have good alternative investments, like CDs and even savings accounts. Traders will begin to reduce their stock portfolios and put some of their money into these safer choices once they know that they can make a reasonable return.

If money moves out of the stock market, stocks will reprice downward. No one knows how far the market will fall. The 1st obvious target is last year’s close, which is below the Dow 20,000 Big Round Number. There is a 70% chance that the market will test last year’s close at some point this year because that is what it typically does. Furthermore, because the weekly chart is so overbought, there is a 60% chance that the correction will be within the next couple of months.

The daily chart does not have a major top, like a wedge or major trend reversal. Therefore, the 1st reversal down, even if it is 150 points, will probably be a pullback in the bull trend. Yet, a big pullback would break below the bull trend line. Hence, traders will watch what happens on the rally back up.

If there is a reversal down from the old high, especially if there is a good sell signal bar, traders will see that as a possible major trend reversal. They will then begin to sell, looking for a swing down.

Reversals have only a 40% chance of leading to an opposite trend. Yet, that is good enough for a swing trader. This is because he is looking for a reward that is several times greater than his risk. He therefore can win only 40% of the time and have a positive Trader’s Equation.

What happens during the other 60% of the time? Usually the trader makes or loses a little. The small wins and losses offset each other. The key to the strategy is the big wins that come 40% of the time.