While the Emini opened with a gap below Friday’s low, and the gap might stay open for years, that is unlikely. It broke below the 15 minute bear channel. In general, there would be a 75% chance of a reversal up withing 5 bars on the 15 minute chart. Traders adjust that based on context. Given that this is also a break below a 3 month trading range, the chance of a reversal within the 1st hour is more like 50%.

The Emini tested the psychological 2000 round number, which is support. The 3 bear bars on the open increase the chances of a trend from the open bear trend. However, the tail on the 1st bar, the stall at 2,000, the dojis, and the bear breakout below the bear channel reduce the chances of a strong bear trend day. They increase the chances that today might have a lot of trading range price action. Also, limit order bulls made money twice in the 1st 6 bars.

The bulls are trying to create an opening reversal up from 2,000. They need a series of bull trend bars. More likely, the Emini will be mostly sideways until it gets closer to the moving average. It will then decide on trend resumption down and reversal up. This early trading range price action reduces the chances of a big trend day. However, the context is good for the bears. Traders should always be ready for a strong selloff at the end of the day when there is a possibility of a bear trend on the daily chart.

The Emini had a huge bear trend day on Friday. Especially relevant is its failure to break below the May low. Whenever there are 2 support levels near the bottom of a trading range, the bears need to get below both.

It is easy to look at Friday and ignore the bars to the left. While the Emini fell below the June low, it held above the May low. This is especially relevant because the bears got very close to the May low and the momentum down was strong. This therefore makes a rally over the next few days as likely as a strong bear breakout.

If today has a gap below the May low and forms a big bear trend bar closing on its lows, the Emini will probably fall this week. Because of last week’s price action, it is equally likely that the Emini will reverse up, even if it gaps below Friday’s low.

Be ready for the final hour

Whenever the Emini is in a bear trend, traders have to be ready to sell in the final hour. Like Friday, there is often a strong rally. As a result, traders quickly conclude that the bear trend is over. Yet, strong bear trends often sell off strongly at the end of the day, despite an early rally. Online day traders have to be ready to sell a late plunge because it can fall far and fast. The news is clearly bleak, yet the chart is telling us that there is confusion.

Anything can happen today

Day traders today have to be ready for anything. The market is very capable of having a big range, a big trend, or a big reversal. It is also capable of disappointing the bears and confusing both the bulls and the bears. Today could be a small, tight trading range day.

If a trader feels overwhelmed, scared, too confused, unable to use the appropriate stop, or unable to hold for the appropriate profit, He should simply wait. Waiting and saving your money is far more noble than trading when you are sure to lose. 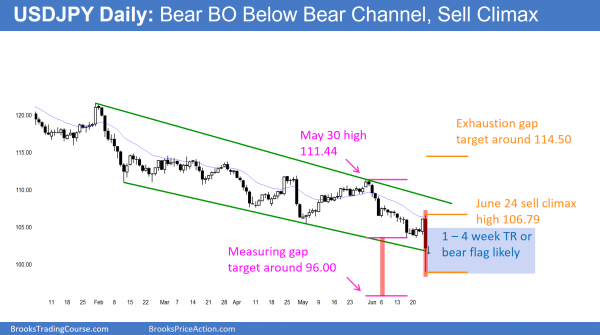 The daily chart of the USDJPY shows that Friday was the biggest bear trend day in the bear trend, which lasted more than 20 days.

Friday was probably an exhaustive end of the selling, but it might first reach a measure move target down around 96.00. If so, the next target is the 2012 low below 80.00.

Whether or not it does, there is a 60% chance that the gap from Friday’s close and Thursday’s low will close before the EURUSD Forex chart falls much below that target. If it does, there would then be a 60% chance of a test above Friday’s sell climax high. If there is a strong breakout above that high, the next targets are the May lower high and a measured move up. This process will require many months to play out.

All financial markets had big trends on Friday. Yet, many remained in trading ranges, like the EURUSD daily chart. Others had huge breakouts that will probably be the end of their trends.

The EURJPY formed a big bear trend bar on the daily chart. It broke far below the year long bear channel. When the biggest bear trend bar appears after a trend has gone on for 20 or more bars, it usually represents exhaustion.

This is a parabolic sell climax on the daily chart. A bear breakout below a bear channel has a 75% chance of reversing up within 5 bars. Traders must look at the highest time frame that shows the pattern. It is barely present on the weekly chart, so the reversal might take 5 weeks, not just 5 days. The target is the top of the channel, which usually then is around the top of the sell climax. That is Friday’s high. It is also usually around the moving average.

A strong bear breakout like on Friday often has a 2nd leg down. However, there is a 75% chance that the 2nd leg will form a micro double bottom with Friday’s low and lead to a rally. There is only a 25% chance that Friday’s collapse in the EURJPY will become a measuring gap from the June 2015 high, yet traders cannot ignore that possibility. If so, the target is the June 2015 low around 80.00. If there is a series of big bear bars closing on their lows this week, the bear will probably win.

While this is possible, the opposite is more likely. In conclusion, the yearlong bear trend in the USDJPY is probably ending. The 1st target for the bulls is Friday’s high. Traders should wait for at least a micro double bottom, a rally to a bear flag, or a strong reversal up before buying.

When buying a sell climax with an obvious target, the stop is never clear. Since the probability is 60% or more that the EURJPY will reach Friday’s high over the next month or two, traders can use risk equal to the reward. They have at least a 60% chance of an 800 pip rally before an 800 pip selloff. If a trader takes this trade, he has to trade small. Once the reversal up begins, traders will be able to use higher lows for tighter stops. 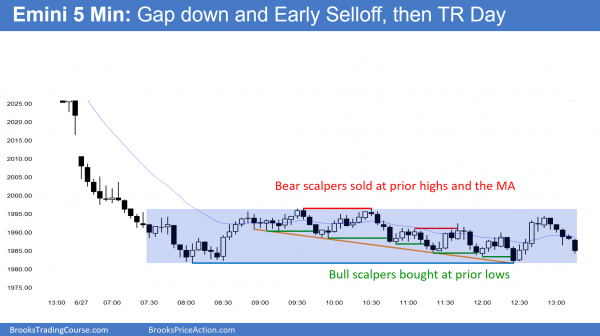 The Emini closed below the May low, triggering a short below a 3 month double top. Today closed above its low. Yet, it also closed below its midpoint, which is bearish. It formed a double bottom and rallied at the end of the day. However, it did not break above the neck line of the double bottom. The rally is strong enough so that the odds favor some follow-through buying tomorrow.

With today’s close below support, tomorrow could sell off as well. However, the selling has been extreme and the odds favor sideways to up.