The Emini gapped up and rallied. When that happens, especially after a buy climax, the rally usually lasts 5 – 10 bars and then the Emini enters a tight trading range for a couple of bars. This is what is most likely today.

It sometimes forms a parabolic wedge top and a high of the day. Day traders will watch for 3 small pushes up and then a reversal down. There is also a 25% chance of a small pullback bull trend without much of any pullback or trading range.

The Emini rallied strongly for the 2nd half of yesterday and it is up 10 points in the Globex session. Yesterday’s rally was unusual and therefore climactic. There is a 50% chance of follow-through buying in the 1st hour or 2 today, even with the gap up open. There is a 25% chance of a strong bull trend after that. There is a 75% chance that there will be at least 2 hours of sideways to down trading that begins by the end of the 2nd hour. If there is no opening rally, it could begin on the open.

The next obvious resistance is the December 29 lower high of 2065.25 and then the other lower highs above that, and finally the all-time high of 2100. The 6 consecutive bull trend bars on the weekly char that ended with last week’s bear bar is a buy climax. After last week’s pullback, the Emini usually would only rally 2 – 3 more weeks before a trading range begins. That is still what is likely, despite the strength of this rally.

The Emini is very strong on all time frames. However, it is unsustainable on the 5 minute chart, and the odds favor at least a couple of hours of sideways to down trading. Also, if the Emini has already transitioned into trading range psychology, and there is no evidence that it has, yesterday’s and today’s breakout above last week’s high could end up disappointing the bulls. One obvious way would be if Friday closed on the low of the week.

For example, if Friday’s unemployment report disappoints the bulls and Friday sells off, then the week could be a reversal bar after breaking above last week’s high. Friday therefore will give traders useful information about the next couple of weeks. If Friday closes on the high of the week, the odds that the breakout above last week’s high will succeed go up, and the Emini will probably test the all-time high.

The rally that began yesterday is again testing the February high. If it turns down, today will be a double top with the March 17 high and a triangle with the February 11 and March 17 highs. The bulls need to begin to break above lower highs because a bull trend needs higher highs and lows. The Emini has been making higher lows since December, but it has yet to make a significant higher high. Without that, traders will correctly assume that every rally is simply a leg in the 2 year trading range.

The October 16 lower high of 1.1495 is the target. The bears want any test to fail, which would create a double top bear flag. If the bulls get 20 pips or more above that, the next target is the August 28 high of 1.1712, which is the top of the yearlong trading range. If the bulls get that breakout, they will look for a measured move up, which would be 1000 pips, and it would put the EURUSD back into its 10 year trading range.

The bears prefer to not see the breakout, but if it comes, they will tr to make if fail. Then, the rally from the March 15 low would simply be a large 2 legged bear flag.

The follow-through buying in Asia and Europe last night has been weak. The reversal down over the past hour has formed a double top with the high of 4 hours ago, and a lower high double top with the March 17 high. The rally from the March 28 low has had 3 strong pushes and is in a tight wedge. If the bears can continue the reversal down of the past hour, the EURUSD might get a TBTL Ten Bar Two Legged pullback on the 60 minute chart.

The bulls do not like the rally stalling at the resistance of the March 17 high because this increases the chances of a failed breakout. They need a strong breakout above that high to have a chance of a test of the top of the yearlong trading range. Without continued strong breakouts above resistance, the odds then favor a swing down in the trading range.

Yesterday’s rally was strong and therefore climactic. Trading ranges usually follow climaxes, and the EURUSD 5 minute chart has been in a 30 pips tall trading range for 7 hours. There is no indication yet that there will be a breakout anytime soon. Online day traders will continue to scalp for 10 pips until there is a breakout. If the breakout is strong, they will then swing trade.

The structure of the 3 day rally in the 60 minute chart is similar to that of the 2 day rally of March 16 and 17. Both had 3 pushes up in a tight bull channel. Last week’s rally was followed by a 6 day pullback. It is too early to know whether the current rally will also pull back for several days, or just pause and then break out. However, wedge buy climaxes are usually followed by at least 10 bars sideways to down, and the overnight session looks like it has begun that pullback. 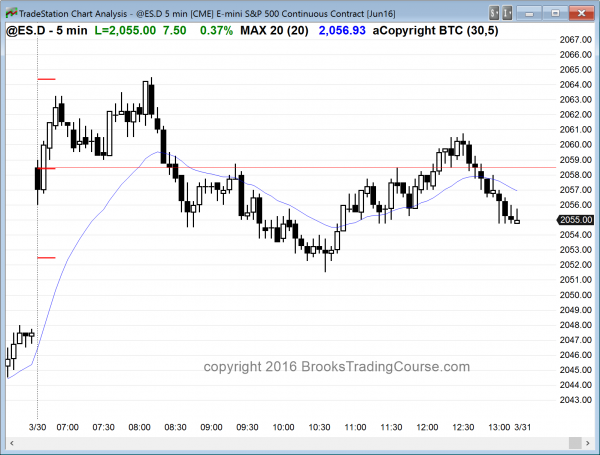 After a weak rally and a weak selloff to a measured move down from the high to the open, the day tried to close around the open and formed a doji day. The bulls failed and the day ended up as a small bear reversal day.

After yesterday’s buy climax, the odds favored at least a couple of hours of sideways trading today. Today was a trading range day. If tomorrow gaps down, today will be an island top. The Emini will probably do something tomorrow to be less bullish going into Friday’s unemployment report. The momentum up is strong enough for another bull trend day, but the daily and 60 minute charts are climactic, and today is a sell signal bar for tomorrow. the odds favor more neutrality and less bullishness going into the report.