The Emini opened with a big gap up at a 50% retracement of the selloff and the June 16 low. The 5 minute chart is overbought. Hence, it is more likely to go sideways to down for the 1st hour or two. Also, whenever there is a big gap up, any rally is usually limited to 5 – 10 bars, like yesterday. Bulls refuse to pay too much more than an average price. Therefore, the Emini usually soon has to go sideways to down and get closer to the moving average.

I mentioned over the weekend that there was a problem with Friday’s bear reversal. The Emini fell 70+ points and came to within 9 points of the May low, yet failed to reach that low. Hence, this was a sign that the bears might not be as strong as the selloff led many to believe.

Monday closed far below the May low. This triggered a double top sell signal on the daily chart. Most noteworthy was yesterday opening at Monday’s high and rallying strongly back above the May low. This is disappointing to the bears, and therefore is trading range price action.

Because of yesterday’s bull reversal, the Emini is more likely to go sideways to up for a week or two than it is to resume down this week. As a result, it will probably form a bear flag. Because of yesterday’s lack of follow-through selling and reversal up, the bear flag would be a breakout mode pattern. Consequently, there would be a 50% chance of a bull breakout instead of a bear breakout.

If the Emini resumes down strongly over the next few days, the bears will regain control. Thursday is the last trading day of the month. Most noteworthy will be its close. The bears want Thursday to close below the May low. This would be create an outside down month. Hence, it would be a sign of strength for the bears.

The bulls want Thursday to close above the May low, preventing the bears from getting a sign of strength. If the bulls succeed, they would increase the chances of a trading range and a breakout mode environment over the next 2 weeks.

What to expect today

Yesterday had swings up and down. Yet, limit order traders made money all day long in both directions. The Emini is therefore balanced. The odds favor continued two-sided trading today.

The Emini is up 12 points in the Globex session. The momentum up is strong enough so that the Emini will probably test major resistance above. It will open around the June 16 low of 2040.75. The 50% retracement the June 23 high is around 2045.The next target is Friday’s sell climax high of 2064.75.

There is a 60% chance that the Emini will reach all of these targets. At that point, it will probably be overbought. Therefore, it will then probably pull back and enter at least a small trading range in the middle of the June selloff. As a result of being in a trading range at a 50% pullback, it would again be in breakout mode. Consequently, the probability of a new all-time high would be the same as the probability of a break below Monday’s low.

Especially relevant is the strength and number of new extremes in the trading range. As a result, the next breakout to a new high or low will probably be successful, and be a swing move instead of a reversal. 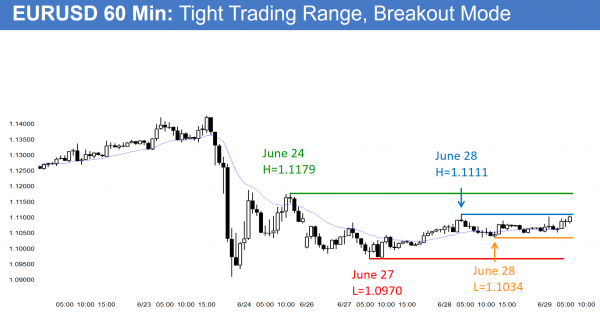 The 60 minute EURUSD Forex chart is in a tight trading range after Friday’s sell climax. There is a 50% chance of a breakout and measured move up or down over the next few days.

The daily chart of the EURUSD had its biggest bear day in months on Friday. It came after a swing down that lasted more than 20 bars. Hence, it is more likely an exhaustion bar than a breakout that will lead to a measured move down. The breakout was strong enough so that the odds favor at least a small 2nd leg down.

However, because of the sell climax, there is at least a 50% chance that the selloff will be brief. There might be enough bulls and bears buying that 2nd leg down to reverse the EURUSD back up. If so, the 1st target is a close above the breakout point. That was the June 1 low of 1.1130. If the bulls succeed, their next target is the moving average and then the top of Friday’s sell climax. That is 600 pips above. If the bulls do succeed, they will probably need more than a month to reach their target.

Rally for next 2 months?

I believe that because the sell climax candlestick pattern in the USDJPY is most likely exhaustive, the other Forex markets are as well. This means that there is a 60% chance of a 500 pip or more rally in all of them over the next two months. However, there might be one more brief leg down 1st.

The bears know that the selling was climactic. Hence, they expect a rally or trading range for a week or two. At that point, they will assess the strength of the bulls. If the rally is weak, the bears will again sell and therefore create trend resumption down. If they are uncertain, the trading range of the past 6 months will continue indefinitely. 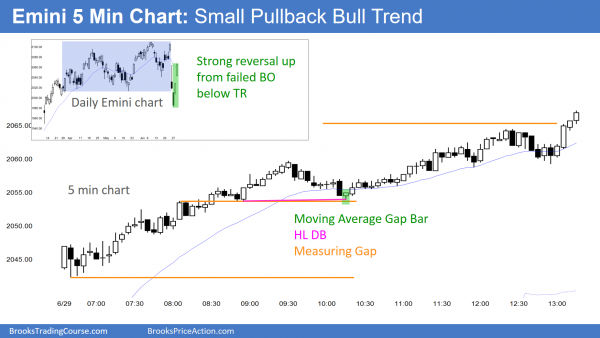 I wrote over the weekend that Friday’s big selloff could be a 2nd leg trap on a trading range. I also said that the bears should have been able to close Friday below the May low. Yet, they failed. Finally, I said that the bears had to be cautious because the last week of June is one of the most reliably bullish weeks of the year. I did not expect as sharp a reversal up this one. Nevertheless, the selloff had problems. Without strong follow-through selling after Monday’s bear breakout, the bulls had a reasonable chance of a reversal.

Today tested Friday’s sell climax high. The bulls will probably take at least partial profits. This means that there will likely be at least a couple of hours of sideways to down trading tomorrow. On the day after a buy climax, that trading range or reversal usually begins by the end of the 2nd hour. There is only a 25% chance of a strong bull trend day tomorrow. There is a 50% chance of follow-through buying in the 1st 2 hours.