Although the Emini is Always In Long, this initial rally will probably be limited, and it will probably soon evolve into a trading range and possibly an early high of the day. There have been tails and reversals, and yesterday had a lot of trading range price action. Finally, there is a 70% chance of a reversal down beginning within the next 3 days, although it probably will not come until after the FOMC report.

If it continues up and especially if it starts to get consecutive strong bull trend bars, it could lead to a strong swing up going into the report, but that is not likely because of the hesitation so far. More likely, today will have a lot of trading range price action. Because it formed a couple of bull gaps in the 1st 5 bars, the odds are that it will go at least a little higher. The odds are that this is not the start of a strong bull trend day and that this rally will fail within the 1st hour or so. Will it be followed by a bear trend? A trading range is more likely.

The probability and location are good for buying put spreads. Why not outright puts? The uncertainty going into the report is high and that adds to the cost of options. If you buy a put and sell a lower strike put, the premium is mostly offset. In fact, the lower priced put is even more overpriced because so many portfolio managers will buy out of the money puts to hedge. That disproportionate demand for out of the money (less expensive) protection makes it relatively more expensive.

A Low 5 sell signal triggered by yesterday falling below Monday’s low, and the math that I just cited is about right for a Low 5 top. The Emini tried to top with an expanding triangle on February 20 (a triangle top has 3 legs and 3 reversals down, for a low 3). It then broke above that top and had two more legs up. Yesterday was the start of a 2nd leg down from the second top, for a total of 5 reversals down. A Low 5 is a variation of a Low 4 top, and I use “Low 4” as the general name for this type of top.

The top is happening at resistance (see my weekend post about the thin area), and in a buy climax (a relentless tight bull channel is unsustainable and therefore climactic). It is similar to the Low 5 top in October (a Low 2 followed by a Low 3 wedge), which was followed by a 2 month trading range.

Those who trade the markets for a living do not care that the odds are unusually high in favor of the bears over the next 2 weeks. All they care about is what the market is doing today. If it rallies instead of selling off, they will buy. As a side note, March-April is the strongest pair of months of the year, and the last 2 weeks of March are usually up. I never trade based on calendar tendencies, buy it is fun to mention them. They are secret handshakes that professional traders toss around, and knowing them is a sign that you are in the club.

The EURUSD will probably have a big move up or down after the FOMC report that comes out today at 11 a.m. PST. Although there is a 70% chance that the report will lead to a selloff in the stock market within the next 3 days, the EURUSD could do anything. Those who trade the markets for a living do not care what any other market is doing. If the are trading the EURUSD, all they care about is whether it is going up or down. They do not care if the stock market, crude oil, or gold are going up or down.

The EURUSD daily chart is in a 4 day bull flag after last week’s reversal up. However, that one day rally was a small 2nd leg in the pullback from the February selloff, which was a 2nd leg up from a bigger selloff that started in October. Get the picture? A series of shrinking 2 legged moves in a trading range is a triangle. It is a sign that the bulls and bears are precisely balanced. However, markets are never precise, so traders know that the price is very wrong. What they do not yet know is whether it is too high or too low.

The European session has been in a 30 pip tall trading range. That does not offer much opportunity to make money. Online day traders might scalp for 10 pips using limit orders to sell above minor highs in the top half of the range and buy below minor lows in the bottom half. Most traders should wait for a breakout up or down. There will be a big move after the FOMC report. Since there is a 50% chance that the initial breakout will fail with 10 minutes, most traders should wait about 10 minutes before taking their first trade after the report. 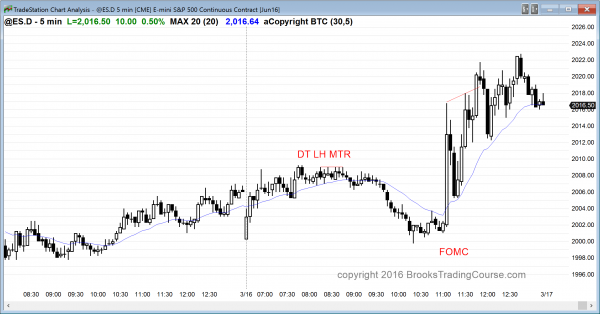 The Emini rallied after the FOMC report and closed the gap down below the December 31 low. After a wedge top, it entered a trading range.

The Emini closed the December 31 gap on the daily chart and tested the close of 2015, undoing all of the selling this year. Because of the buy climax on the daily chart, the odds are that this rally will end within the next few days and that the Emini will enter a trading range for about a month. Less likely, the rally will continue up to a new all-time high. It will try to get to the December 31 close of 2026.25 tomorrow, which would undo all of the selling of 2016.