The bulls want a higher low major trend reversal. The bears want another lower high in their 3 day broad bear channel. Until there is a strong breakout up or down, traders are going to BLSHS, betting against breakouts and betting in favor or more of a trading range. When the market opens like this, it usually goes mostly sideways for an hour or two. The bulls will try to create a double bottom or a wedge bull flag. The bears will try to create a double to or a wedge top.

Although it is currently Always In Short, it is neutral, and traders are scalping, waiting for a strong breakout or a stop entry setup. This increases the chances that the breakout up or down will lead to a leg in a trading range, and be followed by an opposite leg after 1 – 3 hours, like yesterday. It reduces the chances of a strong trend day up or down.

The Emini had its 1st pullback on the daily chart in 5 days after breaking above an expanding triangle top. I said on Friday that a pullback was likely on Monday or Tuesday, and that it would probably only last 1 – 2 days and it would then probably be followed by one more 3 – 5 day rally. At that point, the daily chart would have a potential Low 4 sell setup (see the weekend update). If it triggers, there would be a 60 – 70% chance of a trading range lasting at least a couple of weeks.

The bulls will try to regain control today and begin the 3 – 5 day final rally. Although the Emini is up 5 points in the Globex session with 45 minutes to go before the NYSE open, today might be another sideways to down day. Whether or not it is, there is a 60% chance of a rally beginning within the next 3 days.

Since yesterday ended with a sell climax, there is a 50% chance of follow-through selling in the 1st 1 – 2 hours today. There is a 75% chance of at least 2 hours of sideways to up trading that starts within the 1st 2 hours.

I have been saying over the past week that the EURUSD daily chart was transitioning into a trading range that would probably last at least a couple of weeks. I wrote that a trading range has legs up and down, and that yesterday
s rally achieved its goal of testing the top of the February 26 sell climax. The rally was strong enough so that the current selloff will probably be bought and form a higher low, and then a test back up. The bulls will then see this selloff as a pullback from last week’s breakout above the 60 and 240 minute bear channel. They then will buy, expecting at least one more leg up. If they are successful at halting the bears over the next few days, the reversal up would form a higher low major trend reversal (head and shoulders bottom). These bottoms are always in trading ranges, and therefore have only a 40% chance of a bull breakout and swing up. Many traders buy the reversal up because the reward is much bigger than the risk and it more than offsets the 40% chance of a big profit. Other traders prefer to wait to see the bull breakout of the selloff’s bear channel and then buy. Their stop is then further, but their probability of profit is higher. Both approaches are good.

The bears see the selloff as a double top bear flag with the February 25 high. They expect a breakout below the March 2 low, which is the neck line of the double top, and then a measured move down of about 300 pips. Since the neck line is only 100 pips above the support of the January 5 3 month trading range low, the odds are that the bears will not get their 300 pip selloff without at least first seeing a 200 pip bounce from that support.

Over the past hour, the 5 minute chart has been in a bear breakout below a wedge bottom. There is support around the 1.0900 March 4 higher low, 50 pips below. Since the 2 day selloff has been in a tight bear channel on the 5 minute chart, the best the bulls can probably hope to see today is a trading range. A bear trend usually first have to evolve into trading range before it can reverse into a bull trend.

There is still 50 pips room down to that March 4 low, and the EURUSD might have to test that magnet before the bears take profits and the bulls begin to buy. Although the 2 day selloff has been in a reasonably tight channel, it is near the bottom of the 4 day trading range, and the 5 minute chart might begin to enter a trading range today.

The bear channel is tight, but it has not fallen many pips. It is probably a bear leg in what will become a trading range, and the 5 minute chart will probably begin to convert into a trading range today. 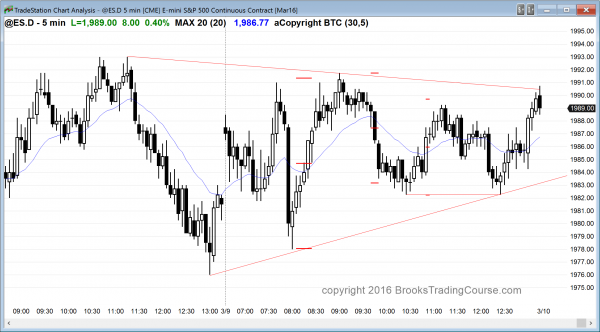 Although the Emini had big swings up and down, the day was a trading range day.

The Emini had a 1 day pullback yesterday. I said that the pullback would probably be 1 – 2 days. It could be more, but that is less likely. The odds are that it will begin to trade back up by the end of tomorrow and get above last week’s high. The rally will probably last a few days and then form a Low 4 sell signal. It would then likely go sideways for at least a couple of weeks to fill in the thin area between the trading ranges above and below on the daily chart.

Less likely, last week’s bull breakout will be an exhaustive end of the February rally, and the Emini will sell off from here and then break below the 2 year trading range.