The Emini rallied for the 1st 3 bars and then had 2 big dojis. This is disappointing price action, and it increases the chances of a trading range day, like Friday. Today might trade both above and below Friday. If this opening rally continues, it will probably be a bull leg in a trading range because the daily chart is so overbought and the 60 minute chart is forming a wedge top and a final flag top. The bulls need strong follow-through buying if they are going to get a bull trend day today, and the odds are against it. The Emini is Always In Long, but probably in a trading range rally, which means that the odds are that it will have a swing down beginning by 8:30 – 9:30.

The daily and weekly charts are overbought. The daily chart has had 3 buy climaxes in its breakout above the February 26 attempt of a top. If it turns down from here, that would be a Low 6 sell signal, which is a Low 3 top (wedge) that failed and was followed by a 2nd Low 3 top. There is a 70% chance of a TBTL correction from there. However, the rally has been so strong so that a micro double top might be needed before the bears can take control for a week or two. This means that there might be buyers instead of sellers below Friday’s low. With 5 consecutive bull days, the odds that the 1st reversal attempt down will fail are higher.

The weekly chart has had 6 consecutive bull trend bars. It has 7 only about once every couple of years. Do you want to bet on a rare event? The odds are against it. This means that this week will probably close below today’s open and the week will probably have a bear body. Because the weekly chart is so overbought, the bear body could be big, like on November 13. However, 6 consecutive bull trend bars is a sign of strength and that means that the 1st reversal down probably will be bough, and it will therefore more likely be minor and followed by a trading range.

Why would there ever be a pullback on the daily and weekly charts? Institutions pay careful attention to risk. The stop for the bulls is now far below, and that means that the risk is greater than average. They could buy puts to reduce risk, but many will simply take partial profits. This means that the bulls will sell. The bears always sell, and if there is now a group of bulls that has stopped buying and instead is selling, what happens? You get a pullback. That is likely on both the daily and weekly charts this week.

With the daily chart as overbought as it is, but still in a 2 year trading range, the odds are that it will begin to go sideways for a month or so. It still has to decide where the top of this new trading range will be. However, with the wedge rally of the past 2 weeks, the odds are that the top was either made on Friday or it will come soon.

The price action will likely begin to be more bearish over the next couple of weeks. This increases the chances of bear trend day. Remember, that has been none is 5 days, and only two small bear dojis on the daily chart in 13 days. Online day traders have been expecting rallies every day. They will now be much more open to swing trading selloffs if there are good sell setups on the 5 minute chart. The will also sell after strong bear breakouts.

Also, bulls sense that the daily chart is overbought. They will begin to take profits above prior highs instead of buying breakouts to new highs. This change will probably begin today or tomorrow.

Day traders never worry about what is probable. That prepares them for something to happen, but if the exact opposite happens, they ignore their prior belief and just trade what is in front of them. If this week has strong bull trend days, day traders will continue to buy, even though everyone sees the market as overbought.

The EURUSD daily chart has had 3 rallies off the March 2 low, which means that this is a wedge rally. The reversal up on March 10 was strong enough to reset the count, which means that many day traders will expect one more brief push up before a pullback. It is too early to know whether more computers will conclude that the rally top is in or if there will be one more push up before they take profits. Once the computers take profits, there will be a pullback that will have at least a couple of small legs sideways to down on the daily chart.

As strong as the 3 week rally has bee, it still has not gone above any significant high on the daily chart, which means that it is only a bull leg in a trading range. If it does start to breakout above prior lower highs on the daily chart, then traders will begin to think that the past year has formed a small double bottom on the monthly chart. A rally above the August neck line would project to 1.2900, which is far above the bottom of the 7 year trading range. The odds are still against this. Instead, a breakout above the August high will probably fail, and the yearlong trading range will still have a higher probability of a bear breakout. It is still a bear flag unless the bulls get a strong breakout above that August high just above 1.1700.

The 60 minute chart is in a 3 day bull flag. If there is a bull breakout, it would be the 3rd push up from the March 10 low, and it will probably fail. That means that this bull flag would then be the final bull flag in the rally, and it will probably be followed by 5 – 10 days sideways to down. The bull flag has had 3 pushes down on the 60 minute chart since the March 17 high. This means that it is a wedge bull flag. Although the bulls began to get their breakout 4 hours ago, the follow-through has been bad. The bears still hope for a bear breakout below the bull flag. This would mean that the top for the next couple of weeks was made last week. The odds still favor a 3rd push up on the 60 and 240 minute charts before the pullback begins.

The reason why a pullback in the strong 3 week rally is more likely than a successful breakout above the February high is that the rally has contained 2 strong buy climaxes. When that happens, there is usually a pullback to work off the extreme buying before a breakout will succeed. When the market rallies fast, bulls have windfall profits and their stops are far. They take partial profits, and that creates a pullback. If they see that the bears fail at reversing the market, they buy again and the rally resumes.

The pullback on the 5 minute chart over the past 2 hours has enough bars to increase the chances that the overnight rally will stall. This means that today will probably be a trading range day. Because the 60 minute chart is trying to break above a bull flag, day traders will be quick to buy if the EURUSD starts to trend up. The 3 day selloff on the 60 minute chart has been in a relatively flat, broad bear channel. It is more likely a bull flag than the start of a bear trend. This means that bears will only scalp unless there is a strong bear breakout below the 3 day bear flag. 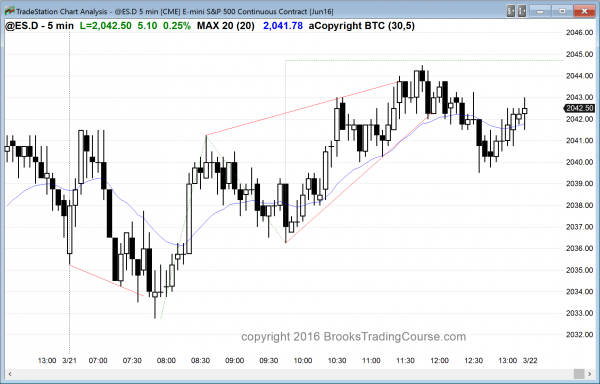 The Emini was in a broad bull channel today, and had a wedge top after an outside up reversal on the daily chart (outside day).

The Emini has buy climaxes on the 60 minute, daily, and weekly charts. Today triggered a Low 6 sell signal on the daily chart by going below Friday’s low, but the 3 week bull channel is tight. That means the bears might need a micro double top before they can get their 1 – 2 week pullback.

The bulls are trying to get one more push up on the 60 minute chart. They have at least a 50% chance of success, but the new high will probably only last a day or two before the daily chart begins to enter a trading range for the next month. Less likely, the current rally will reach the all-time high without any significant pullbacks.