Emini all time high and testing 2400 Big Round Number

Yesterday ended with a Big Down, Big up reversal after a wedge bear channel. The odds favor a breakout above that channel today and then either a trading range or a swing up. Because yesterday was a sell signal bar on the daily chart, today might test below yesterday’s low before beginning its swing sideways to up.

At the moment, the Emini is Always In Short. Most of the past 10 days had early selling, but most later had a swing up. While it is possible that today could be a bear trend day, the odds are against it. This is because yesterday’s bear channel had extreme sell climaxes. Furthermore, it tested 2400 repeatedly, but could not get above. It is clearly important and that makes it likely that the bulls will test 2400 again within a day or two.

The odds are that today will have a swing up that begins by the end of the 1st 2 hours. In addition, if if falls below yesterday’s low, there will probably be buyers below. Since most days over the past several weeks have been trading range days, today will also probably be another trading range day. Yet, if there is a strong breakout with follow-through, traders will trade today like a trend.

Yesterday broke to a new all-time high. In addition, it touched the 2400 big round number. However, the Emini then reversed down and formed a broad bear channel. IT reversed up at the end of the day at the 60 minute moving average and after going below yesterday’s low (outside down day). Consequently, the bears were unable to take control. As a result, the odds still favor at least slightly higher prices over the next few days. Because of the extreme buy climax on the weekly chart, the odds are that any rally will reverse down within a few weeks.

Most noteworthy is the weekly buy climax. Consequently, the odds favor a bear trend beginning at any point within a few weeks. Once it begins, the Emini will begin to form several bear trend days. This will allow day traders to swing trade their shorts, instead of mostly scalping as they have been doing for 2 months.

The Emini is down 1 point in the Globex session. Because yesterday was a bear channel, it was a bull flag. Therefore the odds favor a bull break above the channel and an evolution into a trading range early today. At that point, the bulls will try to create a major trend reversal for another attempt to break above 2400.

Since the momentum up over the past 3 weeks has been strong and yesterday is a weak sell signal bar, the odds still favor at least one more minor new high. Yet, the weekly chart is so extremely overbought that there is a 70% chance of a selloff to below the weekly moving average before the Emini can go much higher. Consequently, the top for the next 2 months will probably form within a few weeks. 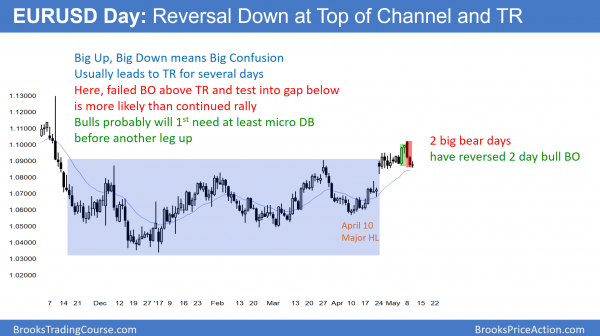 The daily EURUSD Forex chart reversed down this week. Because it is still within its 3 week trading range, the bulls see the reversal as part of a bull flag.

The Big Up, Big Down pattern of the past 5 days creates Big Confusion. Since confusion is a hallmark of a trading range, the daily chart will probably go sideways for a few days. The 3 day selloff was strong enough so that traders will probably sell the 1st rally attempt. The bulls will therefore need at least a micro double bottom before they can resume the 5 week bull trend. Their next target is a strong break above last week’s high. Additionally, they want to test the November 9 top of the strong bear reversal.

Yet, even if they are successful, the rally would still be simply another leg in the 2 year range. There is no evidence that either the bulls or bears will break out of that range anytime soon.

The reversal down has found support at the bottom of the 3 week range. Unless the bears can break strongly below the range, the odds still favor the bulls over the next week or two. Yet, the 5 week rally is a breakout about a 6 month trading range. Since most breakouts fail, the odds still favor this rally being just another leg in the 6 month range. Consequently, the bears will probably create a swing down within a couple of weeks.

The EURUSD Forex market has been in a 20 pip range for the past 4 hours. Additionally, it is testing the bottom of the 3 week trading range. Since the 3 day selloff has been in a tight bear channel on the 240 minute chart, the 1st reversal up will probably be minor. Traders will therefore sell a 1 – 3 day rally that retraces about 50% of the 3 day selloff. Consequently, the 1st 50 – 70 pip rally will probably form a lower high and lead to another test down to the bottom of the 3 week range.

At that point, the bears would see a head and shoulders top on the 240 minute chart. The bulls would see a triangle or double bottom bull flag. The chart would therefore again be in breakout mode. 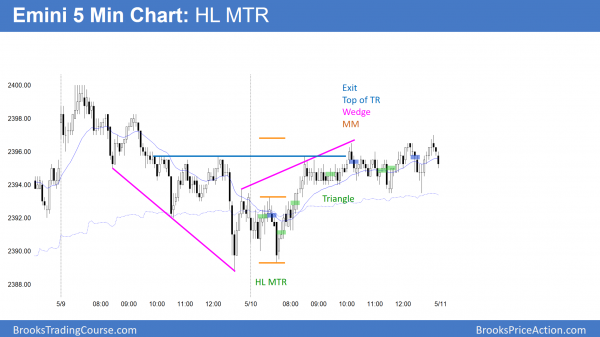 The Emini reversed up from just above yesterday’s low and formed an inside day.

Today’s inside day is an ioi buy signal bar on the daily chart. The momentum up this week is good enough to make a new all-time high above 2400 likely within a few day. The bears want higher high major trend reversal on the daily chart, but they do not yet have a good buy signal bar. Furthermore, the bull channel has been tight. Consequently, the odds favor a least a little more rally before a 5% correction.