There was a gap up but weak rally in the Emini. The bears triggered a small wedge top for a swing sell. The daily chart has been in a trading range for at least 6 months. In a trading range, when there are two resistance levels that are close to one another, the market often goes above one, but not the other, and then turns down. This might happen today.

The bulls want the Emini to break strongly above the October 8 and 6 highs and then reach a new high. From the new high, the bears would look for a topping pattern, and the bulls would want to trap the bears with a strong bull breakout and create a measured move up.

The bears prefer that the stock market does not get above the October 6 and 8 highs, and instead form a lower high and then continue down in a bear channel. If the Emini does go above the September all-time high, they expect to be able to turn it back down. The new high would be after the weekly moving average gap bar (the high of 2 weeks ago was below the moving average, which is a sign of strong selling), which is usually followed by a major trend reversal. The daily chart would also have a possible expanding triangle top. 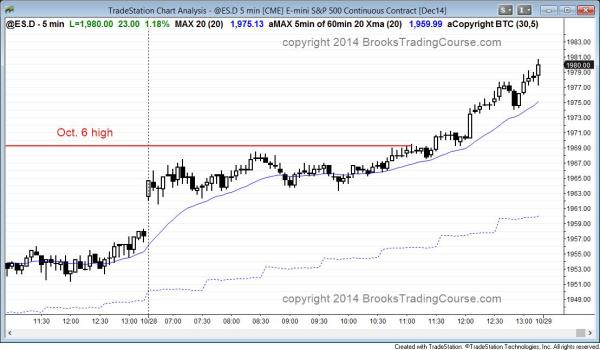 The Emini gapped up and then entered a trading range for the first half of the day. It then broke above the October 6 high, pulled back, and rallied strongly into the close.

The Emini gapped up, but then went sideways for 4 hours. It had a 1 tick breakout above the October 6 high, but despite the possible failed breakout, it failed to reverse down. After a small two legged pullback (an ABC or high 2 bull flag), it broke strongly to the upside and became a small pullback bull trend for the rest of the day.

Since the stock market ended in a parabolic buy climax, the odds favor about two hours of a pullback beginning in the first couple of hours tomorrow. However, there might be follow-through buying for the first hour.

Tomorrow is an FOMC report day. The Emini will probably have a big move after the 11 a.m. PST report. The move can be up, down, or both. The September high is the all-time high and it is 30 points higher, but that is within reach because an FOMC report sometimes results in a very big move.