At the moment, the market is always in short. However, the odds are that this early selloff will not continue to yesterday’s low and instead will reverse up from either a two legged move down or a parabolic wedge bull flag. That reversal would then be a higher low major trend reversal. It would likely lead to a rally that lasts at least a couple of hours and have at least a couple of legs. A trading range day is probable, but it might have big swings.

When there is a sell climax into the close, there is about a 67% chance of a gap up and at least a 2 hour rally that begins within the 1st hour or so on the next day. The channel down was tight. Although there might be some follow-through selling, the odds favor at least 2 legs up that last at least 2 hours, beginning within an hour or two. If today is to become a bull trend day, it will probably need a major trend reversal.

There is a 33% chance that the bear trend from Friday will continue today. If it does, Friday will probably be a spike and today would then probably be a bear trend channel. Bears will look for a bear breakout below the gap up open, and then follow-through selling before they will be willing to swing trade their shorts.

A sell climax, like the one on Friday’s close, usually leaves the bears exhausted. They are willing to sell again, but they usually will wait to sell higher and after at least a 10 bar rally (a big ABC pullback, which is a big low 2 sell setup). The big gap up is enough premarket buying to leave traders confused. It is a sign that the bulls have become strong, at least temporarily, and it is probably the start of a trading range that will last at least a couple of hours and have at least 2 legs up. Less likely, the rally will be part of a bull trend instead of a big trading range. 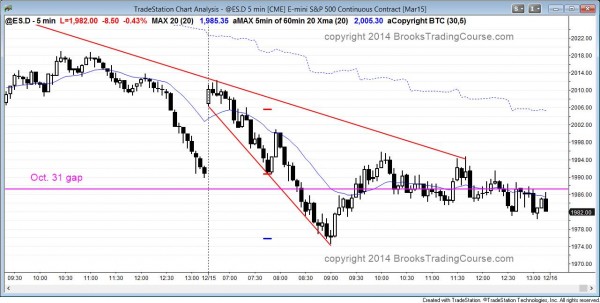 The Emini had follow-through selling for the first 2 1/2 hours and closed the October 31 gap on the daily chart. The Emini reversed up from a parabolic wedge and big lower low major trend reversal, but spent the rest of the day oscillating around that gap.

The second leg up formed a lower high. The first leg up was also a lower high. As long as the Emini continues to form lower highs, the bears are still in control…it is still a bear trend. The bulls need to rally above a prior lower high to convert the bear trend into a trading range. Until then, every rally is still a bull leg in a broad bear channel.

Although the daily chart has had a strong bear reversal, it is still at the 100 day moving average and it is testing the October gap, and it might bounce at any time. For example, if crude oil finds support here around 55, the Emini might bounce. Crude oil is in a parabolic sell climax and could bounce sharply at any time. However, the selloff in the Emini is strong enough on the daily chart to make it likely that there will be sellers above. This means that the rally will be a major trend reversal sell setup, and that the Emini will probably have at least one more leg sideways to down on the daily chart.