The Emini had a small gap above the tight bear channel and then rallied for several bars. The bears want the rally to be another lower high and for it to become to an opening reversal that leads to a push below yesterday’s low. The bulls want to get above and hold above the 15 minute moving average, which has been resistance for 4 days. They need the market to get above yesterday’s high, which is a major lower high. If they can get there, like after the FOMC report, they will probably get follow-through buying for several days.

The bears want the bear channel to continue. However, since the Emini is now always in long, the bears need a strong reversal down to take control of the market again. They need consecutive strong bear trend bars. without that, and selling will be bought and the market will either be in a trading range or a bull trend.

Although it is always in long, the bars are not too big and the market is in the middle of yesterday’s sell climax. Also, the follow-through so far has been disappointing. This increases the chances of an early trading range.

There will be an FOMC report at 11 a.m. today. Yesterday ended in a sell climax, and there is a 67% chance that the market will rally for at least a couple of hours this morning. However, there is often follow-through selling for an hour or two that forms a lower low major trend reversal. There are still targets below in the 1950 area, like the Oct. 28 gap at 1953.25, and a trend channel line, which is the potential bottom of a 60 minute wedge bull flag that began on December 1.

Since the Emini is so close to both and the FOMC meeting will probably result in a big move, there is a good chance that the targets will be hit today. If so, the market will likely reverse up because the 5 and 60 minute charts are so oversold. However, it is very important to be aware that the exact opposite can happen and there could be a huge selloff to far below support. If the daily chart is actually in a bear trend and not a bear leg in a year long trading range, traders have to be prepared to swing trade from the short side because surprises usually happen on the downside in bear trends. 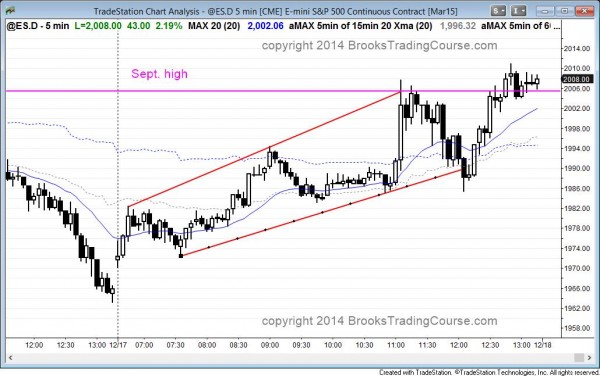 Yesterday ended with an expanding triangle bottom, and today rallied in a broad bull channel. There was a deep pullback after the FOMC report at 11 a.m., but the Emini closed above the September high, which was strong resistance yesterday.

Today turned into a trend from the open bull trend day and it rallied in a broad bull channel. The selloff after the FOMC report lacked follow-through and it held above the bottom of the bull breakout. This formed another higher low and it gave confidence to the bulls, who then closed the day above the September high, which was such strong resistance yesterday.

Although the weekly and monthly charts are overbought, the 5 and 60 minute charts are oversold. This rally will probably continue for at least another day or two. The bulls want the weekly chart to create a bull reversal bar at the weekly moving average. However, the bulls have the edge after today’s strong reversal. Some bulls will call this a 3 day expanding triangle bottom, and others will call it just a double bottom. It does not matter other than it being a bottom.

Since the Emini has been in a bear channel and yesterday’s high was a strikingly important lower high, the bulls want to trade above it tomorrow. That would convert the 5 minute bear trend into at least a trading range. If the bulls get their breakout and it is strong, it could convert the bear channel into a bull trend.