Since yesterday ended with consecutive sell climaxes, the odds are that there will at least a 2 hour trading range or rally at some point after the initial selling. The bears got an opening reversal down from the moving average and a breakout below last month’s low. This was the monthly sell signal. They now are trying to get strong follow-through selling.

At the moment, the Emini is always in short. The bulls hope that the bear breakout fails and that there is an early low of the day. Since the selling and bear breakout have been strong, the bulls need either a very strong reversal up or a major trend reversal. If they do not get either, any buy is just a scalp. Bears will continue to swing trade shorts. They will scalp as well. This is climactic selling, which increases the chances of a reversal, but the first reversal up will probably be sold.

My thoughts before the open: Sell signal on the monthly candle chart

As I discussed in the weekend blog, the monthly chart now has a sell signal. The signal bar is a bear bar with a close on its low, which increases the probability of a profitable short. Bears will sell below last month’s low and put a stop above its high. Since the monthly chart is in a strong bull trend, the odds favor just a pullback or a tight trading range. However, there is a 40% chance of two legs down and a pullback to the moving average. The Trader’s Equation is good for the bears. Traders will either sell 1 tick below last month’s low, or wait to see if there is a strong bear breakout and then sell.

Since there is only a 40% chance of a swing down, then there is a 60% chance of sideways to up, so the math is good for the bulls as well. Bulls will buy below last month’s low. They will even buy above last month’s high, betting that the sell setup looks so good that many bears will enter before the reversal down, and will get out above last month’s high. This creates the possibility of trapped bears. If the bulls can get the upside breakout, they might get two legs up. More likely, there will be sellers above and the upside is limited because the monthly chart is so overbought.

When the math is good for both the bulls and the bears, the market is usually transitioning into a trading range. Since this is the monthly chart, a trading range of 10 – 20 bars could be more than a year.

The bulls will also buy because the Emini is at the bottom of the 3 week tight trading range. Their risk is to below the low of the range, which is not far, and their reward is to the top of the range, which is much greater. The Emini is in breakout mode. The daily ranges can shrink as this continues, but they have still been big enough for swings up and down. However, as any trading range grows, traders become much quicker to take profits because reversals come earlier as traders become increasingly confident that the breakout will come soon. 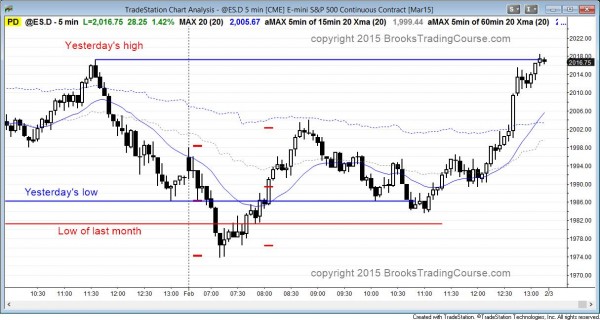 The Emini triggered the monthly sell signal by falling below last month’s low, but reversed up all day.

There was a 70% chance of at least 2 legs and 2 hours up today after yesterday’s sell climax. As expected, there was some follow-through selling and it triggered the short on the monthly chart. However, the Emini reversed up and had 2 big legs up. It went above yesterday’s high at the end of the day and became an outside up day.

The reversal up was big enough to be a surprise, and that increases the chances of another leg up tomorrow. Since the close was climactic, the market might pull back before testing up again. Until there is a strong breakout up or down, with follow-through, traders expect these attempts at breakouts to reverse before long. Trading ranges constantly have strong rallies and selloffs, only to disappoint traders on the next day.

There will be a breakout and the character of the market will soon change into trend mode. Once it does, there will be strong follow-through. Until then, traders will continue to be quick to take profits.

It is still within a tight month long trading range so strong moves up and down continue to have bad follow-through. If the bulls are able to break strongly above the 2060 top of the range, they might get a measured move up. Since the monthly chart is so overbought, the odds of much more up are small and the 3 month trading range will probably be the final bull flag before a bigger pullback on the monthly chart. Less likely, the breakout will be strong and it will be followed by another leg up.