The Emini opened with a big gap up and a big bull trend bar. This is another buy climax and it follows several yesterday. When the market has a series of buy climaxes and is far above the moving average, its initial upside is usually limited to 5 – 10 bars before it pulls back to near the moving average. It can get close by either reversing down or by going sideways for a couple of hours.

The bears are hoping that this rally will be like all of the others of the past month and fail. They are looking for a parabolic wedge top and an early high of the day. To convince traders that they are in control, they need a series of consecutive bear bars with closes near their low, or some topping pattern, like a major trend reversal. Because of the failed breakouts of the past month, traders will be prepared to swing trade shorts if this reverses down.

At the moment, the Emini is always in long and in a trend from the open bull trend, but the upside is probably limited because of how far it is above the moving average. However, if there is a pullback to near the moving average, bulls will look to buy. The bears need a strong reversal down to convince traders that they will be able to control the market for 2 legs and 2 hours. The bulls probably need a test near the moving average to find more buyers because the follow-through buying during the first few bars has been weak.

My thoughts before the open: Bull trend reversal or a pullback from the breakout

Once there is a successful breakout, the market will probably move very quickly for several days because traders will be trapped into the wrong direction, betting that breakouts will continue to fail. Also, opposite traders will be trapped out because they will be hesitant to swing after all of the previous breakout attempts failed. Be ready to switch to swing trading mode on the daily chart because this trading range has lasted about a month and most trading ranges don’t last much longer than that. 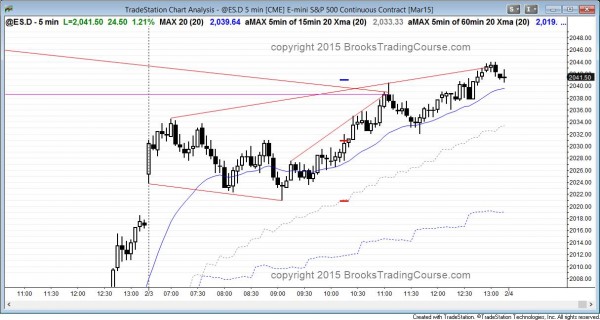 The Emini gapped up, but it was far above the moving averages. It had to go sideways to down to get closer to the moving average to find buyers. The bulls bought the wedge bull flag, and the Emini became a small pullback bull trend. After a bigger pullback at 11:05, which is common in small pullback bull trend days, the market rallied to a new high, which it usually tries to do. The 11:05 pullback had a strong enough signal bar for a short, given the context. The Emini was testing a bear trend line, the 60 minute double top, the top of a tight bull channel, and a measured move target.

Traders who sold below last month’s low are still short with a stop above last month’s high. However, the price action over the past 2 days is bad for their position.