The day began with a tight trading range at yesterday’s low. The bulls were hoping for a wedge bottom, and the bears wanted an opening reversal down from the moving average. Several days last week had a similar open. When the Emini looks like this, traders are hesitant to swing trade until there is a strong breakout with follow-through in either direction. Also, a tight trading range on the open, especially within a big trading range, increases the chances of a lot of trading range trading for the rest of the day. If that happens, bulls will look to buy reversals up from the bottom for scalps and bears will sell reversals down from the top. If the legs are strong, they will wait for 2nd signals.

As I am writing, the Emini is always in long and in a 5 bar bull trend from the open bull, but it is not getting gap closes (closes above the high of the prior bar). This increases the chances that this rally is a trap and it will be followed by a reversal down.

My thoughts before the open: Pullback at the top of the trading range

As strong as last week’s rally was, the breakout above the top of the month long trading range was not strong and there has been no follow-through. Rallies in trading ranges often break to the upside and then reverse, just like the selloff below the bottom reversed up. Until there is strong follow-through, it is more likely that these breakouts will become simply tests of support and resistance.

The rally on the daily chart had a first push up on January 29 before the bear breakout last week. The reversal up from last week was so strong that the count might have been reset. If so, Friday’s high could be the 2nd of 3 pushes up to a wedge lower high major trend reversal. This means that the Emini might have one more leg up before there is a swing down on the daily chart and a successful breakout below the trading range.

The context is great for the bears, just like it was great for the bulls early last week at the bottom of the range. The bears are shorting up here with a small risk compared to the reward of a successful breakout below the bottom of the trading range and then a measured move down. The probability is also better than 50% because most trading range breakouts fail. The risk is big and unclear, which is usually the case when shorting at the top of the range. Traders are never certain if the top is in.

Although bears can put stops above last week’s high, they might need a stop above the December 26 all-time high of 2088.87. Even if the rally goes above last week’s high or the all-time high, bears will be ready to sell again if the market turns down because the Emini has been in a trading range for 4 months and bulls and bears will assume that every breakout up and down will fail. Once they see a strong breakout with follow-through, they will then switch to trend trading and begin to swing trade again on the daily and weekly charts.

Most of the bars over the past few weeks have been within trading ranges, even though there were strong trend days up and down. Traders will assume that this pattern will continue until they see that the market has switched into strongly trending price action. Because traders do not know if the 5 minute chart will have one more new high, the Emini might have to test up today or tomorrow. Bears will try to make the rally fail and form a 60 minute lower high major trend reversal. Bulls want the new high above last week’s high.

Because traders know that the Emini is at the top of the month long trading range and it will probably reverse down, they will be prepared to swing trade a bear breakout, if one forms without first testing last week’s high. 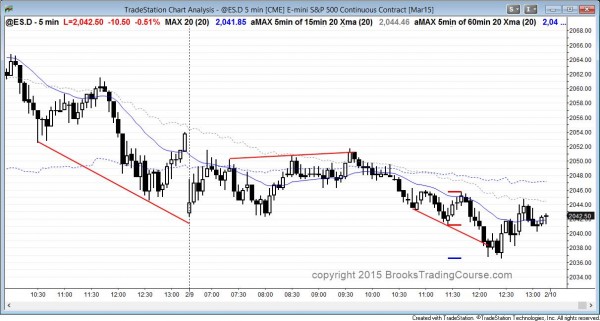 Today was in a trading range and the range was about half of a typical day’s range. That made a trending trading range possible. After a bear breakout, the Emini reversed back up into the upper trading range and closed around the open of the day, creating a doji day on the daily chart.

Today is the entry bar on the daily chart for the short below Friday’s low. The bears saw Friday as a signal bar for a failed breakout of the month long trading range. However, last week’s rally was strong enough so that the bears will probably need a 2nd entry short. This means that one more test of last week’s high is likely. The math is good for the bears for a trade down on the daily chart since the market is at the top of a month long trading range, making the risk small compared to the reward, and a failed breakout and reversal down is more likely than a successful bull breakout.

Today was in a trading range all day. There was a failed breakout above that formed a wedge top. The reversal down broke to a new low of the day, and the Emini reversed up from a wedge bottom. Since the day ended in a 3 hour bear channel, the odds favor a bull breakout and a couple of hours sideways to up. That process might have begun at the end of the day. However, bears will continue to sell rallies because the market is at the top of a month long trading range. If the bulls fail to get a breakout on a second test up this week, there will then be a 2nd sell signal and the Emini will probably then test down. This is more likely than a successful bull breakout and measured move up because most trading range breakout attempts fail and reverse.