Emini gap up ahead of Wednesday’s FOMC announcement

Yesterday gapped up to another all-time high and was a strong bull trend day in a bull trend. But, whenever there is a gap up, there is often a gap down. The gap down can be on the next day or several weeks later. That would create an island top. If there is no gap down, there is often a pullback that closes the gap, like after the gaps of August 27 and September 13. Even if yesterday’s gap closes, a gap closure or an island top is only a minor reversal. The odds still favor higher prices.

Since next Wednesday is an FOMC day, the Emini might begin to go sideways. In addition, after a big gap up above major resistance, the Emini usually goes sideways for a few days. Therefore, even though the odds favor higher prices, the bulls might not get much follow-through buying until after the FOMC announcement.

The Emini is up 1 point in the Globex market. The bulls are hoping that the weak September rally is now strong. They therefore want confirmation of yesterday’s breakout. Their minimum goal is to create a bull body on the daily chart today. That would increase the chance of higher prices next week.

Since yesterday was a buy climax, the bulls are probably exhausted. That increases the likelihood of a trading range day today. If so, there will be a fight in the final hour over whether the close will be above or below the open. In the final hour, the bulls will buy if the Emini is below the open and the bears will sell if it is above. Since yesterday was a strong bull day in a bull trend on the daily and weekly charts, the bulls will probably have a bull close today.

There is a 20% chance of a strong trend day up or down. If the bears get a strong bear trend day, yesterday’s breakout will fail. Their minimum goal is a close below the open. However, they need a reasonable size bear body closing on its low on the daily chart. If they get that today, which is unlikely, today would be a good sell signal bar on the daily chart. More likely, today will either be a trading range day or a weak bull trend day. 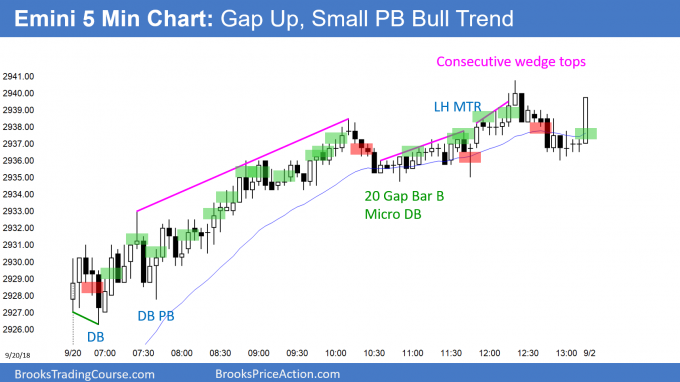 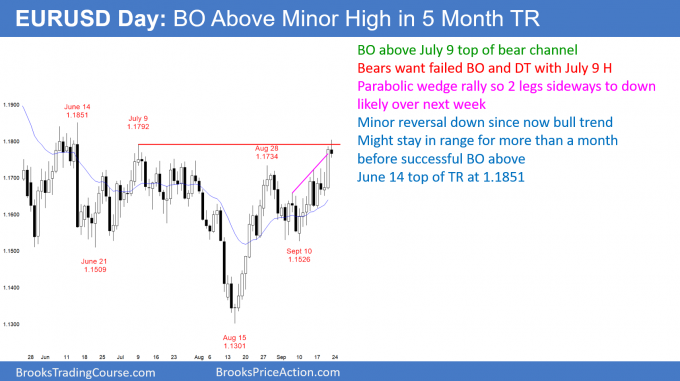 The EURUSD daily Forex chart achieved the initial goal of the bulls by breaking above the July 9 high. Since the rally is a parabolic wedge, a 2 legged pullback is likely over the next week.

The EURUSD daily chart had a parabolic wedge rally to above resistance. Therefore, the odds favor a pullback for the next week. However, the bears might need a micro double top over the next few days before they get their 200 – 300 pip pullback.

Since a pullback is likely, day traders will sell rallies. Because the daily chart is in a bull trend, they will buy selloffs. Finally, the daily chart is still in a trading range and the month-long rally has probably ended. Therefore the odds favor smaller days and more trading range trading over the next week. As a result, most day trades will be 10 – 30 pips. The market is also likely to get quiet ahead of Wednesday’s FOMC announcement.

Because the September rally has 3 legs in a tight channel, it is a parabolic wedge buy climax. The odds favor a couple legs down that will retrace 50 – 100% of the rally from September 10.

Since the daily chart is now in a bull trend, the rally will likely continue above the June 14 high at the top of the trading range. However, it might stay in the range for a month or more before the successful breakout.

There is a 30% chance that the bears will get a double top with the July 9 high and then a break below the August 15 neck line. 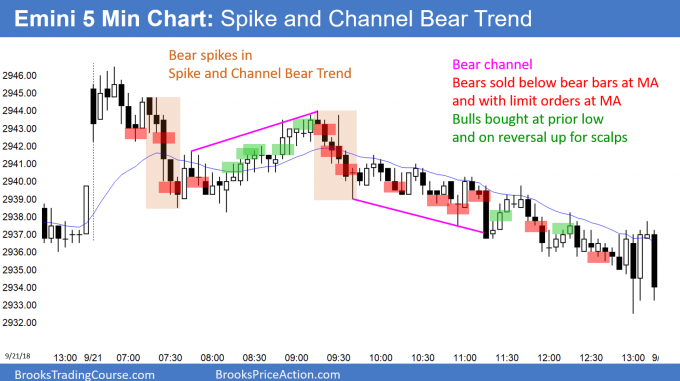 The Emini sold off from the open in a relentless Spike and Channel Bear Trend. Since today was a bear day on the daily chart, it provided no confirmation of yesterday’s bull breakout. Furthermore, it is a sell signal bar on the daily chart for next week for a failed breakout above the August high.

The bulls need a bull bar early next week to make traders believe that the rally will continue up to 3000. If next week sells off, like after Wednesday’s FOMC announcement, next week would be a sell signal bar on the weekly chart. That would probably lead to a 2 – 3 week selloff down to the 20 week EMA.