The Emini reversed down from its test of yesterday’s high with 3 consecutive bear bars, making the Emini Always In Short. The bars had prominent tails and lacked big bodies, increasing the chances that it will not get far.

It then had a Low 2 short below the moving average and the signal bar was good, but the follow-through was bad. The tails have been prominent and yesterday had a lot of trading range price action. This initial selloff has been weak, and it probably will be a bear leg in what will become a trading range day.

Since yesterday’s range was small, today should test either below its low or high, or both. The Emini is Always In Short and it reversed down from yesterday’s high. The odds are that it will fall below yesterday’s low, but the price action is weak. It is more likely that today will again spend a lot of time within tight trading ranges or weak channels. This type of open has a small chance of being followed by a strong trend, despite how overbought the 60 minute chart is. So far, traders have been mostly scalping, waiting for a strong breakout with follow-through. The current bear swing has not been strong, and most bears have scalped out at least part of their short.

My thoughts before the open: Intraday trading strategies at the all-time high

The Emini has had a very strong rally this week and it is climactic. Bears want this to be a buy vacuum test of the all-time high. This is a great location for buying puts because the Emini is at the top of a trading range where many prior rallies have failed. Today is Friday, and put sellers try to create temptation going into the weekend so that they can make 2 extra days of time decay. When a rally is as strong as this one has been, the bears will probably need a micro double top on the 60 minute chart before they can test down. This means that there is no advantage to buying puts today, despite the temptation.

The bulls want a breakout to a new all-time high. This has been one of the strongest rallies in the 8 month trading range, and it comes after a strong attempt by the bears to break below the 200 day moving average. This gives the bulls a better chance of a successful breakout, but until there is a breakout, there is no breakout. When trading ranges have 2 prior highs at the top that were followed by big reversals, and the tops are close in price, there is often a breakout of the lower, and then a deep pullback. This could happen here with then June and May highs. the June high is 2122.00 and the May high is the all-time high of 2126.25. The Globex Emini is now at 2118 and it could easily go above both today. However, day traders should watch for a sell candlestick pattern to form between those two prices because it could be followed by a swing down, especially since the 60 minute chart is so overbought. This is the day trading tip for the day, and it could provide good day trading for beginners who are looking for a swing trade candlestick pattern.

Today is a Friday so weekly support and resistance can be important, especially in the final hour. The most important prices are the May and June highs, and the all-time high close of 2120.25. Because the Emini has been in a trading range for 8 months, traders have to expect that the bulls will be disappointed.

Although the odds are against the breakout above the trading range to a new all-time high today, even though that would require only a 9 point rally from the current Globex price, day traders have to be open to that possibility. An overbought 60 minute chart can become more overbought, and every trading range successfully breakouts out eventually. If today begins to look like a strong bull trend day, day traders should swing trade their longs, even if they believe logic makes that impossible. Price is truth. If the Emini is doing something you think it should not be doing, then you and lots of other traders will be trapped, and that often leads to a big trend.

Finally, most of the day trading this week has been in weak bull channels and tight trading ranges. That means that today will probably be the same. However, because the Emini is so overbought on the 60 minute chart and it is testing the all-time high, it can have a strong trend up or down beginning at any time. Do not be in denial if there is a strong breakout with follow-through up or down. 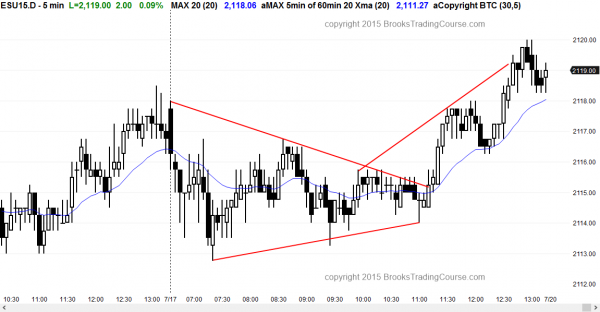 The Emini was in a triangle for the first 4 hours and then rallied to above yesterday’s high.

The Emini is overbought on the 60 minute chart, and the daily chart is testing the top of the 8 month trading range. However, the bears will probably need at least a micro top on the daily chart before they will be able to test down. Because the Emini is testing the all-time high, traders should be ready for a surprisingly big move up or down. If there is a gap up on Monday or a strong bull breakout, it could lead to a month or so of higher prices because of the weekly chart’s tight trading range. However, whether or not there is a bull breakout, there is still an 80% chance of a test of the monthly moving average this year, which is about 10% below the high.

Those trading Forex for a living focused on weakness in the GBP overnight for swing trading. The other Forex crosses were in small trading ranges and were for Forex scalping only. The GBPUSD had a 50% pullback from the June selloff and formed a wedge bear flag on the 60 minute chart. It had a bear breakout below that flag last night. The selloff might be simply a sell vacuum test of the bottom of the 2 week trading range. The bears need follow-through selling before traders will conclude that they will be able to test the July low. The 5 minute chart had consecutive sell climaxes overnight and will probably have to bounce to find sellers. However, the bulls will need 20 or more bars in a trading range before they can create enough buying pressure for traders to conclude that they will able to reverse the GBPUSD back up.

Traders learning how to trade the markets can see that the EURGBP is in a broad bear channel on the daily chart, and it is trying to reverse up at a new low at the bottom of the channel. However, after 4 consecutive strong bear bars, the bulls will probably need a 2nd entry buy signal before they can reverse the daily chart back up. The overnight rally is just the first attempt. On the 60 minute chart, the rally is barely breaking above the bear channel. However, the breakout might be enough strength to be telling us that the next test down could lead to a major trend reversal up. That would correspond to the micro double bottom that the bulls need on the daily chart.

The USDCAD is also interesting because the rally over the past month has been becoming increasing climactic on the daily chart. The 60 minute chart is forming a a weak bull channel after Wednesday’s strong bull breakout. The 5 minute chart had a strong bull breakout over the past few bars, and it is strong enough to be followed by a swing trade up based on follow-through, or down because of a climactic reversal.