The Emini had a big gap up, but then had an opening reversal down from the 15 minute moving average. It also formed a double top with the final lower high of yesterday. At the moment, it is always in short and it might test yesterday’s low, or even break below yesterday’s low, but the day after a sell climax has a 70% chance of at least a 2 hour rally so the bulls will probably get a major trend reversal within the first 2 hours and then at least a 20 bar rally. Less likely, the day will be a strong bear trend day.

Until the bulls create a credible bottom and a strong reversal up with follow-through, buys are only scalps. After a reversal, bulls will swing trade. Bears expect a trading range after yesterday’s climactic channel, but are currently in a bear swing. A trading range means that they expect a rally at some point, but are hoping for a trend from the open bear trend day.

Today will probably attempt to create a bull trend reversal after a sell climax. Yesterday was a sell climax day so today has a 70% chance of at least a two hour rally. There is sometimes follow-through selling for an hour or two first. Because this is still holiday trading (the final day) and it might be in a tight trading range for much of the day, there should be at least one bull swing. Because yesterday’s range was so big and today will likely gap up, today could be an inside day.

Today is also a Friday and weekly support and resistance can be important. The nearest resistance is last week’s low of 2068.00 and the nearest support is the weekly trend line around 2002, but that is too far to have much chance of being hit today. There is also the December 18 gap up at 2026.75, but that is a target on the daily chart.

Today is the first trading day of the year and there is a tradition on Wall St. to find significance in what it does. Traders look at the price action for the first day, first week, first 5 days, and first month, and then compare it with past years to come up with statistics about whether the new year will be an up or down year. Although the statistics are valid, they do not help in structuring trades. 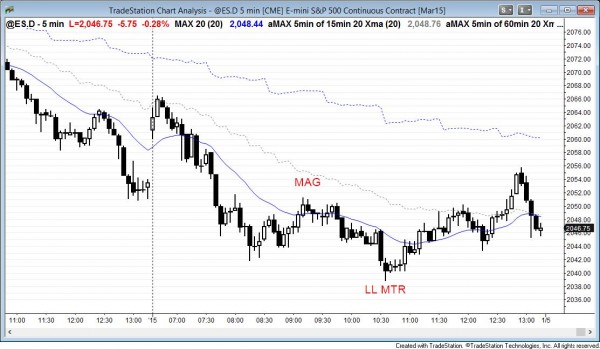 The Emini had follow-through selling. The moving average gap bar (MAG) led to a the final leg of the bear, as expected, and the market reversed up from a lower low major trend reversal.