The Emini opened in a limit order market. Since the market is in the middle of a 3 week trading range, it is in breakout mode, and there is an FOMC report at 11 a.m. There was disappointing follow-through from the initial reversal down, and the reversal up has not been strong either. There will probably be an early swing in either direction, but traders are waiting for a strong signal bar within good context, or a breakout with strong follow-through before they will swing trade. Until then, traders are scalping, and mostly entering with limit orders. This is difficult for traders starting out and they should wait for the market to trend. At that point, they can look for stop entries, or they can enter on strong closes within breakouts (like buying closes in a bull or selling closes in a bear).

My thoughts before the open: Breakout mode and there is an FOMC report

Yesterday was a neutral day, as expected, since it was in the middle of a 3 week trading range and today has an FOMC report. There probably will be an early swing trade in either direction, but the key feature today will be the report at 11 a.m. The market has more than a 90% chance of a big move up or down on the report. It is usually better to not trade until after the first 2 bars close because there is a reversal 50% of the time and the stop is going to be far away. Traders should not be risking a lot on a 50% trade in a fast market. It is better to wait for at least that 2nd bar to close to have a higher probability of a breakout or a failed breakout. 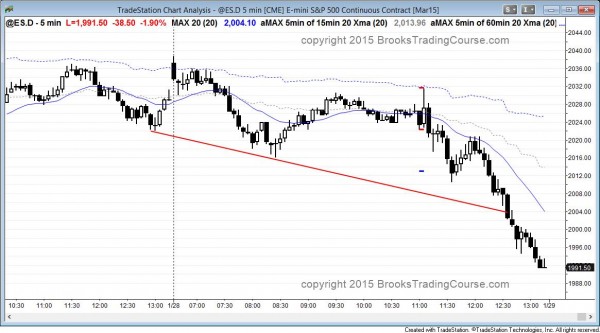 The Emini reversed down on the FOMC report and became a bear micro channel for the final hour.

Although the day had trading range price action even after the FOMC report, it ended with a 15 bar bear micro channel. With the close on the low and the daily chart in a tight trading range and in breakout mode, tomorrow could gap down and become the start of that 20% pullback on the monthly chart that I expect this year.

However, a sell climax into the close has a 70% chance of being followed by at least a 2 legged rally lasting at least a couple of hours. When the selling is this strong, there usually is follow-through selling in the first hour or two. In 30% of cases, there is a strong bear trend day without the 2 hour reversal. The context here is good for a big bear breakout, but until it happens, traders will bet that it will not succeed.

Traders will look for swing trades tomorrow. They will initially look to short, and if the day becomes a small pullback bear trend, they will sell all day and swing trade. Since the odds favor a swing up that begins in the first two hours, traders will be ready to swing trade longs as well. However, they need to see a strong bottom and a strong bull breakout. Without that, they will only scalp longs, if they buy at all, and will concentrate on swing trading shorts.