The Emini opened at the top of yesterday’s 4 hour tight trading range after a sell climax on the 60 minute chart, and began with tight trading range price action. It was a limit order market on the open. Swing traders are waiting for a breakout with follow-through in either direction. Until they see one, they will buy low, sell high, and scalp. Many will enter with limit orders and scale if they want to trade before the breakout. Most traders should wait for the breakout, but there sometimes is a second entry short at the top of the range or a second entry buy at the bottom where they can enter with stops.

At the moment, the Emini is having a bull breakout and is always in long, even though there is no follow-through yet. However, because of the 4 hours of trading range behavior, it could have a deep pullback so traders need to trade small and use wide stops. Today will probably be a trading range day or a broad channel trend day. It is less likely to be a strong trend day in either direction.

Yesterday began with a strong bear trend, but the 2nd half of the day was mostly within a tight trading range. This is a sign that the bear trend might be evolving into a trading range. It looks like today will open within that range. It probably will begin as a trading range day, but it might have swing trades in either or both directions at some point. Because it is so oversold, it should soon become more two-sided, which means that it will probably enter a trading range today or tomorrow after the sell climax.

Trading ranges have bottoms and tops and the Emini often falls below prior bottoms and rallies above prior tops, and then reverses. The goal of all markets is to create a zone of value where both the bulls and bears believe the price is fair. Then, at some point, both agree that the price is wrong and the market breaks out in either direction, creating either trend resumption of the prior trend, or trend reversal.

The 60 minute Emini is oversold, but there is a bull trend line at 2006. Although the market might rally without touching the line, if the market is to rally and not trend below the line, it probably has to poke below it to see if there are more buyers or sellers there. The breakout will then either succeed and lead to some measured move down, or fail and lead to a reversal up.

The 60 minute chart is far below its moving average and it is in a tight bear channel. it has not touched the moving average in over 20 bars, which is a long time. That is the first target for any rally. The rally will either begin with a bottom formation or a bull breakout. Yesterday ended with a wedge bottom, but there was not much buying pressure. This is not yet a reliable bottom. The FOMC minutes tomorrow and the unemployment report on Friday could lead to a breakout in either direction, and the breakout could succeed or fail. Even though I think the Emini will fall about 20% from its high at some point this year, it is still in a bull trend on the daily, weekly, and monthly charts. It needs to get below prior higher lows on the daily chart to end the bull trend. 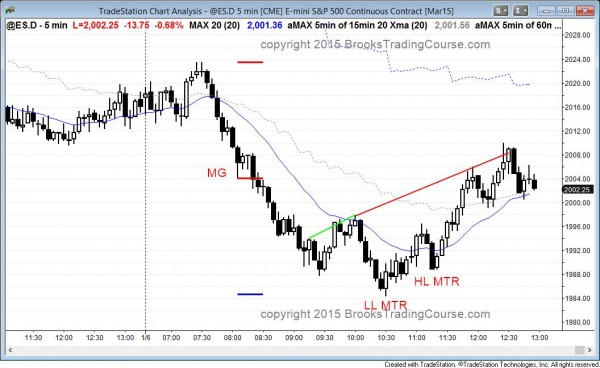 I am writing just before the close. The 5 minute and 60 minute charts were oversold coming into today, and they both had an extreme sell climax during the first half of the day. There was no one left to sell, and the market had to go higher to find sellers. The result was a major trend reversal.

The bulls wanted a reversal candle on the daily chart, which means a close above the midpoint of the day’s range. The bears want the opposite and won. The Emini closed below the middle of the range. The top of today’s 60 minute sell climax is the first target for the bulls tomorrow.

There is an FOMC report tomorrow at 11 a.m., but Friday’s unemployment report is more important. Since the selling has been climactic, the Emini will probably enter a trading range going into Friday’s report.