The Emini gapped up and the bulls want to get above yesterday’s high, which is the top of the last 60 minute sell climax. After a weak rally on the open to the resistance of the 60 minute moving average, swing traders will wait for a strong breakout up or down before taking swing trades. Until then, traders will scalp. Most traders should wait for a breakout with follow-through or for a strong signal bar with good context.

At the moment, the Emini is in a 7 bar trend from the open bull trend and it is always in long. The first reversal down will probably be bought. However, the Emini is at the 60 minute moving average, and it might get a swing down soon. There is a 20 gap bar sell setup on the 60 minute chart.

There is still room above to the top of yesterday’s 60 minute bear breakout, and the Emini can get there and go 5 or more points above the 60 minute moving average. However, a 5 point breakout above or below the 60 minute moving average still often fails and that is not enough for traders to trust the breakout. The Emini will probably have a swing down within the first couple of hours because of the 20 gap bar sell setup on the 60 minute chart. Less likely, it will be a bull trend all day. Most likely, it will have a swing down and soon enter a trading range.

Since there is a lot of room to yesterday’s high and low, today could have swings up and down. The FOMC minutes come out at 11 a.m. and could move the market, although there probably will not be a surprise.

My thoughts before the open: Probably more rally after a sell climax

The 5 minute chart was oversold prior to yesterday’s rally. Yesterday ended with a rally after a sell climax. The 60 minute chart is still oversold and probably will have to go sideways to up for at least a day or two. The daily chart still has a higher low. Traders are deciding between the current wedge top on the daily chart leading to at least 2 legs down, and the October rally being so strong that the count started over. If so, the Emini would need one more high for a credible wedge top on the daily chart. I think the selloff has accomplished its goal. It has lowered the probability for the bulls enough to again make the Emini neutral.

Because it is now neutral and oversold, I think the Emini will try to bounce soon before falling below the December low. After the bounce, traders will then decide between a lower high major trend reversal and the breakout to a new all-time high.

Yesterday was a strong enough rally to make the odds of an additional rally attempt likely today. That rally could be a bull trend or a bull leg in a trading range. Less likely, the rally was a bear flag and today will be another bear trend day. 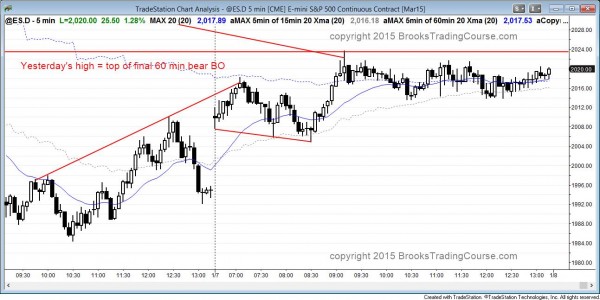 The Emini rallied to above the top of the final 60 minute bear breakout, as expected after 60 minute consecutive sell climaxes and a probable exhaustive selloff yesterday. It rallied from a wedge bull flag, but then entered a tight trading range after going 1 tick above its target.

Yesterday’s 60 minute chart had the two biggest consecutive bear trend bars late in a bear trend. The odds were 60% that the Emini would rally to above the top of that final bear leg, which was yesterday’s high. The Emini stayed always in long all day and it reached its objective of going above yesterday’s high (it went 1 tick above).

It spent the final 4 hours in a tight trading range. The bulls want trend resumption up and the bears want trend reversal down tomorrow. The 60 minute chart is at its moving average and is in a wedge bear flag. The test is also a 20 gap bar sell setup. The bears want the bear breakout.

However, if they get it, it will probably form a major trend reversal because of the strength of the daily chart. The October rally was so strong that this current higher low will probably test up. We do not know if the rally will fail and form a lower high major trend reversal, or succeed and create a new high. Less likely, we have seen the high of the year and the 20% correction has already begun (see my blog from this past weekend).

Friday is an unemployment report and the Emini might continue mostly sideways again tomorrow. Swing traders will always be watching for strong breakouts with follow-through (we only had one today).