The Emini sold off on the open. It failed to rally above the resistance of the all-time high. There are extreme buy climaxes on the 60 minute and daily charts. The bulls hope to get to a new all-time high today, but the trend from the open bear trend make that unlikely. Today’s selloff from just below the major resistance of the all time high and from below yesterday’s high, which was a 60 minute parabolic wedge top, reduces the chances for a bull trend day.

Today will probably be either a trading range day or a bear trend day. There is a 70% chance that we have seen the high of the day. The selloff was strong enough so that the odds are the 1st reversal up will be sold. What we do not yet know is if the lower high will result in a bear trend or in a trading range. The 60 minute moving average is support below.

The Emini is Always In Short and bears will sell the 1st rally. However, the rally might be strong enough to make traders wonder if there will be a new high of the day. Until there is a new high, the odds favor at least a test back down after any rally. Until there is a strong break below the 60 minute moving average, the odds favor that today will not be a strong bear trend day, and instead be either a trading range day or a weak bear trend day.

Pre-Open Market Analysis
S&P 500 Emini: Learn how to trade at an all-time high

For the past month, I have written about 2 major resistance levels, the August 17 top of the bear trend and the all-time high. If the Emini is in a bull trend, it will get above both. If it is in a trading range, it often gets above one, but not the 2nd. That is what we will find out this week, possibly after Friday’s unemployment catalyst. While it is possible for the Emini to break strongly above the 2117.00 all-time high today or tomorrow, you have to wonder why it did not do it yesterday or Monday. This increases the chances that it is waiting for the report to decided whether it will break to a new all-time high or pull back for a couple of weeks. The odds of the pullback are slightly greater because the bulls could have created their breakout yesterday or Monday, but failed.

The daily and 60 minute charts are overbought. If this is a bull trend, that is irrelevant because an overbought market is meaningless in a strong trend. The rally just keeps working higher, despite being overbought. That is the nature of a breakout. The price is wrong and the market has to go higher until it finds the right price. All bull breakouts are overbought, but they can go very far and usually do not stop until they reach a measured move target that looked impossible just 10 or 20 bars earlier.

Because Friday’s report is important and the Emini only cleared on of two hurdles, the odds favor a trading range going into the report. The bulls had a chance to get their breakout, but failed. That means that they are not yet strong enough, and it increases the chances that they will need more time before they are confident that the bears are unable to create a double top with the all-time high.

If today is going to be a trading range, it will have at least one a swing up and one down, each lasting at least 2 hours. There is often a 30 minute move on the open that fails, and then the 1st swing begins. Those who trade the markets for a living know that the bulls want the breakout. Those learning how to trade the markets need to realize that there is a reason why the breakout has not yet happened. It is because the bulls are not yet confident enough.

With the target so close, the bulls might try to create a strong rally on the open. If they are successful, traders need to be ready to short a reversal down if it fails, because a failed early rally could be the high of the day. Also, if there is a 30 – 60 minute strong selloff on the open, bulls need to be ready to buy. If today is going to be a trading range day, a strong initial move can trap traders into believing that a trend day is underway. Be ready for a reversal. Also be ready for a strong initial move that is successful. We are at important resistance and just before a report. Traders need to be flexible and quick to make decisions.

The EURUSD continued its 8 day bear channel overnight after its strong bear breakout. It is testing the bottom of the 6 month trading range, and it is now just above last week’s low. The bulls want a 60 minute major trend reversal around the current price level and the bears want a strong breakout below last week’s low, and then below the bottom of the trading range at around 1.0800. Last week’s low is only 10 pips below the current price and it is just below the round number of 1.0900. There is a good chance that the EURUSD will get there within the next hour.

Will it break strongly below, or will it form a double bottom around last week’s low? We should find out today. With the US financial markets possibly pausing going into Friday’s unemployment report, the overnight selling might be a sell vacuum test of support. If so, the EURUSD will stall around the current level today and tomorrow. If instead the bears have taken control of the daily chart again, the EURUSD will quickly fall for 100 pips more this week to test the bottom of the 6 month trading range.

The momentum down over the past two weeks has been strong, and that increases the chances that the EURUSD will test 1.0800 within the week. Trading ranges often have very strong breakouts that test the top and bottom of the range, and then reverse. August 28 was an example of a buy vacuum test of the top of the range.

Because strong breakout attempts are common in trading ranges, but most fail, traders will not believe that the current bear breakout attempt will get down to the 1.0500 12 year low until after there is a strong breakout below 1.0800. By the time the breakout convinces traders that it is successful, it will already be near the target.

That is the nature of markets. Traders are never certain until after an event occurs. Until then, probabilities are between 40 and 60%. When they are high, the stop is usually far and there is little left to the trade. High probability always comes with bad risk/reward. The bears have high probability at the moment. The bulls have great risk/reward. There always has to be a reason for an institution to take the other side of every trade. Some bulls only want high probability. They will not buy until there is a strong reversal up. At that point, the stop is far and there is less profit potential, which means worse risk/reward.

At the moment, the 60 minute and daily chart favors the bears, but because the EURUSD is at support, it could reverse up quickly at any time over the next week. Until it does, traders will look to sell rallies. If the overnight selloff stalls, bulls will begin to buy for scalps, betting on a trading range going into Friday’s report. 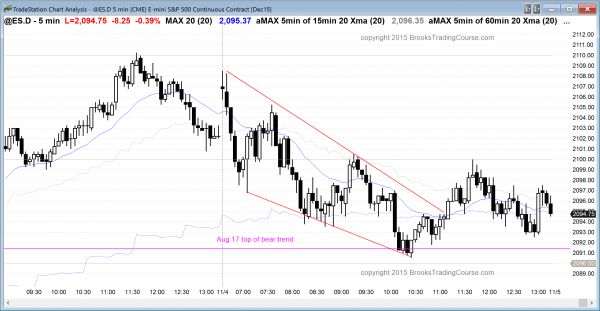 The Emini traded down in a broad bear channel. It reversed up from a wedge bottom and set up a higher low major trend reversal going into tomorrow.

Although the Emini was in a broad bear channel, it was also in a trading range for most of the day. It found support at the 60 minute trend line and moving average, and at the August 17 high. If it rallies tomorrow, it might form a 60 minute lower high major trend reversal after the nested wedge top. The market then would be set up for a big move after Friday’s unemployment report. Tomorrow will likely have mostly trading range price action, like today.