The Emini has been in a tight trading range at the Globex measured move target and the daily moving average. It is Always In Short, but oversold on the 60 minute chart. There is no bottom yet, but when a market enters a tight trading range and it is oversold, as it is on the 5 minute chart, the odds are that there will soon be a swing up. Bulls need a good buy signal bar or a strong bull breakout. Bears will be quick to exit unless there is much stronger follow-through selling. The odds favor at least 2 hours of sideways to up trading soon.

Pre-Open Market Analysis
S&P 500 Emini: Learn how to trade the markets near support

The Emini has begun its pullback from the series of buy climaxes on the daily chart (a Low 5 sell pattern). The first target is the gap between the October 27 low and the October 20 high, which is about 10 points below the current Globex price.

After a buy climax, a reasonable goal is TBTL Ten Bars, Two Legs sideways to down. The bulls take their surprisingly quick, big profits and wait to see how much lower the market will go before they will buy again. When they buy and when the bear scalpers take their profits, the Emini rallies to test the buy climax high.

The bulls want a bull breakout above both double tops and a measured move up. Because the Emini is so overbought on the monthly chart, and because it never tested the breakout above the monthly double top formed by the 2000 and 2007 highs around 1600, the upside is probably limited. Although the bulls might reach a 300 point measured move target based on the height of this year’s trading range, it is more likely that any breakout to a new all-time high will be limited and it will be followed by a reversal down.

On the daily chart, the selloff of the past 5 days is probably the 1st of at least 2 legs sideways to down. It has lasted enough to make bears confident that the next rally will fail. They will sell above. The bulls will also probably be less confident of a new high and will more likely scalp. The result will probably be a test down. Trading ranges can last a long time. The trading range from January lasted 7 months.

However long the current one lasts, it will almost certainly be much briefer. The reversal up from the October low had so much energy that traders expect a big move soon. The bulls know it could be down from a double top, but they are trying hard to get the bull breakout. The odds for the bulls getting a new all-time high and the bears getting a double top are both about 50%. Even if the bulls get a new all-time high, they have only a 40% chance of reaching a measured move up.

This means that it will probably have both a swing up and a swing down, and each will last from 1 – 3 hours. Day traders do not know which will come first, but those who trade the markets for a living will watch for a reversal of any move that lasts for 1 – 3 hours. Traders learning how to trade the markets should be careful to not buy a strong bull breakout or sell a strong bear breakout 20 or more bars into a swing because climactic reversals are common in trading ranges.

Trading ranges on the daily chart can have trend days on the 5 minute chart. If the Emini begins to trend, day traders will swing their trades. Even if the swing reverses after 3 hours, there is still plenty of room for a swing trade.

The EURUSD has been in a 4 day trading range after a series of sell climaxes on the 60 minute chart. Support on the daily chart is the April low around 1.0500, and it is about 200 pips below the current price. Traders are deciding if the EURUSD should pull back up to resistance before testing that low. Because the 60 minute chart has had a series of sell climaxes, the odds are that it will need more days of sideways to up trading before the bears can get their test down.

If the bulls are able to create a credible major trend reversal within the 4 day trading range on the 60 minute chart, resistance above is at the May July double bottom around 1.0823, which is 100 pips above. The 60 minute chart also has resistance and therefore a magnetic pull at each of the lower highs in its bear channel. The minimum target would be a measured move up from the 4 day trading range, which is about 100 pips tall.

Bulls see the 60 minute trading range as a head and shoulders bottom. Bears see it as a double top bear flag. The EURUSD is in breakout mode. Until there is a strong breakout with follow-through, day traders will buy low, sell high, and scalp,expecting the trading range to continue, but knowing that there will be a breakout up or down soon. The probability of an upside breakout is the same as that for a downside breakout. When a trading range lasts for 50 or more bars, the price action is telling traders that the bulls and bears are balanced and have an equal chance of a breakout and a measured move. 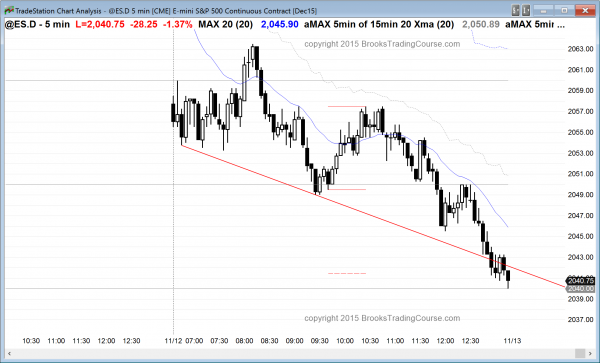 The Emini was in a broad bear channel and it tested below the October 27 bottom of the 60 minute wedge.

The Emini has traded down for 7 days after its buy climax that ended just below the all-time high. A trading range is more likely than a bear trend. The odds are that this first leg down in the trading range will end tomorrow or Monday and that it will be followed by several days up.

Because today was in a relentless trend, there is a 70% chance of at least a couple of hours of sideways to up trading tomorrow. Tomorrow is Friday. The nearest support is the weekly moving average, which is around 2030, and the nearest resistance is the low of 2 weeks ago, just above 2050.