The Emini opened with a trend from the open bull trend, but the bull breakout bars had bad follow-through. That increased the chances that the rally was a bull leg in what would become a trading range.

There was a parabolic wedge top just after 7 a.m. This increased the odds for a swing down that will last at least a couple of hours. However, there is often one more push up before the bear swing begins.

At the moment, the Emini is still Always In Long, but there is at least a 50% chance that this opening rally will fail and that there will be at least a 2 – 3 hour swing down starting within the next few bars. Less likely, the bulls will break above the wedge top and get a measured move up to above the August high, and possibly have a strong bull trend day.

The daily and 60 minute charts are in a buy climax at the important resistance of the high of August 17, which was the top of the bear trend. The Globex session went 1 tick above on Friday and reversed down. The day session reversed down from 3 points below, leaving traders who trade the markets for a living wondering if the test was adequate. On a 5 minute chart, a test has to get to within 1 tick of a target before traders will look for a reversal. On a daily chart, they will begin to look once the rally gets to within a point or so. Three points would be unusual. This increases the chances of at least one more attempt to break above that resistance again this week. If the bulls fail again, the reversal down would created a nested double top. There would be a small double top with last week’s high and a big double top with the August high (some computers would see it as a double top or lower high with the all-time high from September).

The Emini sold off overnight, but reversed up, and it is currently up about 2 points. Although the daily chart is in a buy climax, the bull channel of October was so tight that Friday’s reversal will probably be minor and result in a pullback rather than a bear trend. The best the bears can reasonably hope to see over the next week on the daily chart is a small trading range. The weekly rally is so strong that a top would probably require at least a few weeks of sideways trading.

Traders are wondering whether the overnight reversal up will get back to Friday’s high today or tomorrow, or if Friday’s selloff was so strong that the rally will be followed by at least one more leg down before any test of the August high. In either case, traders learning how to trade the markets should understand that most professional traders see the selloff on Friday as a pullback in a bull trend and not yet the start of a bear trend.

Whenever traders “wonder,” they are uncertain, and uncertainty means they are certain that the market is unlikely to go to far up or down. The result is a trading range, and that is what is likely on the 60 minute chart today and maybe tomorrow. However, a 60 minute trading range usually has strong 5 minute swings and often trends that last all day. Day traders will be open to anything today, and they need more information. It is still more likely that the Emini will test the August high this week than it is that a correction from the buy climax began on Friday. However, if there is a strong bear breakout with follow-through on the 60 minute chart, they will be quick to change their minds and believe that the Emini will trend down and test one or more of the 60 minute higher lows.

The 60 minute chart is in a relatively tight bull channel. It has had 2 legs up after the October 22 bull breakout, and the legs are in a wedge channel. Day traders know that there might be one more push up to a new high, both because there is still a target above and because a wedge channel often has a 3rd push, and then a reversal down. The alternative is that the Emini forms a lower high and reverses down.

Once the reversal down from the buy climax begins, the minimum objective would be TBTL sideways to down (Ten Bars, Two Legs), and a test of the higher lows in the bull channel.

The daily chart of the EURUSD had consecutive sell climaxes over the past 2 weeks and is testing the bottom of the 6 month trading range. Traders are wondering if the strong bear breakout below the bear trend line is the start of a selloff that will fall below the bottom of the bear trend, or instead reverse up and form a higher low major trend reversal. The bulls need more strong bull bars or a strong reversal up. Without either, the bears are still in control. However, the context is good for a reversal back up. The bulls need strong bull bars before traders will believe that they won, and that the bear breakout had failed.

The 60 minute chart has traded up is a tight, weak bull channel for 3 days. It is in a bear flag. However, the more bars that get added to a bear flag, the higher the probability will be that there will be a bull breakout above the bear flag instead of a bear breakout below. The EURUSD was sideways overnight in a tight trading range and day traders will scalp today, buying low and selling high, unless there is a strong breakout up or down. The other major Forex crosses were also sideways overnight, and day traders have been scalping them as well. 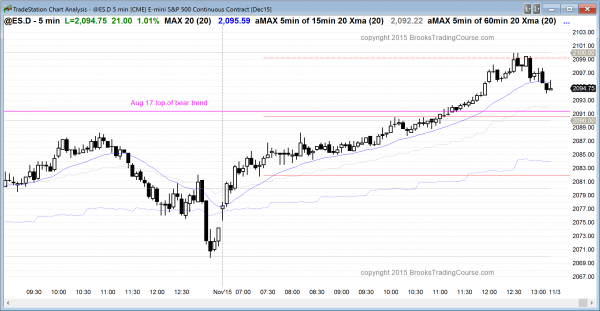 The Emini rallied in a small pullback bull trend to above the August 17 top of the bear trend. It sold off into the close after consecutive buy climaxes.

The Emini finally got above the top of the bear trend. The next target for the bulls is the all-time high of 2117. The bulls want the breakout and the bears want the double top. Since the 60 minute and daily charts are in buy climaxes and the Emini is back in its 7 month trading range, the odds are that it will go sideways for a week or two. The chance of a significant selloff in the next 2 weeks is small because the upward momentum is so strong. The bulls want follow-through buying tomorrow, and the bears want a reversal back below the August 17 high. It does not matter what happens because the odds are that the Emini will go sideways for about 10 bars on the daily chart after a buy climax.