Problems with the server so 7:12 update was lost.

I wrote that the Emini was in a bear swing in a probable trading range day, and that it would probably have swings up and down, each lasting at least a couple of hours.

Pre-Open Market Analysis
S&P 500 Emini: Learn how to trade the markets when exhausted

The daily and 60 minute charts are overbought and had a 3rd push up on Friday. The breakout to the 3rd push was strong enough to make it more likely than not that the first pullback will be bought, despite the wedge top. Also, the breakout above the bottom of the 7 month trading range was big enough so that the 1st test down to the bottom of the range will probably be bought. This means that as overbought as the Emini is, it will probably need at least one more test up on the daily chart to form at least a micro double top before it begins to correct sideways to down for 5 – 10 days.

Thursday’s breakout was big enough so that it might be a measuring gap rather than an exhaustion gap. Friday’s doji was bad follow-through. Also, Friday had a bear body, even though it was only one tick. This increases the chances the Emini will at least have to test down in the next couple of days to see if there will be enough selling to close the gap between Thursday’s strong bull close and Tuesday’s high. Right now, the odds are there there will be buyers below and that the first test down will be bought. If the bears are able to create a big bear trend day today or tomorrow, then the odds of a trading range for a week or two will be at least 50%.

The next target for the bulls is the August 17 or 19 top of the bear trend, which is where theoretically the final bears will give up. Then, the bulls will try for a new all-time high.

The selloff on the weekly chart created 6 moving average gap bars, which means that their highs were below the moving average and therefore was a gap. When gap bars form late in a bull trend like this, traders watch for the test of the prior high because the rally to that high usually becomes the final rally before the market tries to create a top. Traders learning how to trade the markets should realize that the major trend reversal can be a lower high or a higher high, and rarely a perfect double top. The current rally is so strong that the weekly chart will probably need to go sideways for several weeks to create selling pressure before bears will be confident that they have a reasonable chance of creating a top. So, although the bears might get their top and then a reversal down that might last several months, they probably will be unable to do so for at least several weeks.

The Globex session was sideways and it is down about 3 points from Friday’s close. This is following Friday’s trading range day in an overbought market. Today will probably be mostly sideways because of Thursday’s buy climax. If it is a trading range day, it will have at least one bear leg and on bull leg, and each will probably last 2 – 3 hours. It is impossible to know in advance which will come first. About half of the time, the Emini begins a leg, but it lasts only about a half hour. It then reverses and the actual 2 hour leg then unfolds.

It is always possible that today could have strong follow-through buying or it could reverse strongly down. Until there is a strong breakout with strong follow-through, those who trade the markets for a living will be inclined to buy low, sell high, and take quick profits. If enough of them do, the result will be a trading range day, which is most likely.

The selloff in the EURUSD last week was strong, and it triggered an ABC bear flag sell signal (Low 2 sell) on the monthly chart. It is now near the bottom of the 6 month trading range, and it is oversold on the 60 minute chart. There is no bottom yet, but there were bear flags last night and Thursday, and they are a sign that the consecutive sell climaxes will probably soon evolve into a trading range. Bears will begin to take profits and look to sell higher. Bulls will begin to believe that the bears will be less interested to sell down here and they will start buying for scalps. There is no bottom yet, but the selling that began overnight might lead to a third push down and a wedge bottom. If so, that could be the start of a couple of legs up and then a trading range. Last night’s selling was weak. This is also a sign that the bears are becoming less interested in selling at this price, and it increases the chances of a bounce this week.

The USDJPY has rallied for 6 days and is at the top of the 2 month trading range. Thursday’s breakout was strong enough to get a 2nd leg up, which it did on Friday. The 60 minute chart last night began a pullback from that 2nd leg up. The odds favor a trading range for at least a couple of days, and last night’s weak selloff might be the start.

The same is true of the 60 minute chart of the USDCAD. It has had 3 pushes up to about a 50% correction of a month of selling. The odds are that the rally will evolve into a trading range today or tomorrow. 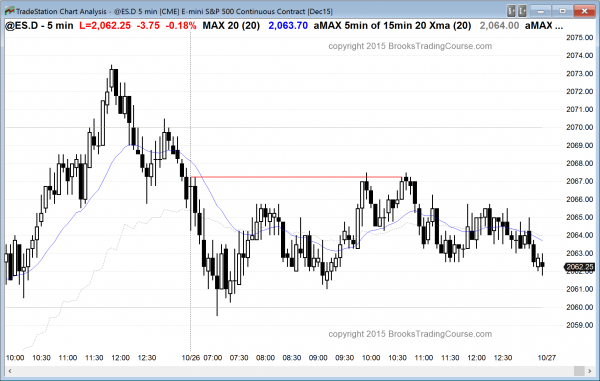 The Emini had a small trading range day.

The Emini was in a limit order market today after Friday’s weak follow-through from Thursday’s big bull breakout. Wednesday is an FOMC meeting and the Emini might be waiting for the report to decide whether Thursday’s buy climax was the end of the October rally or the middle of a bull trend that will reach a new all-time high. The daily and 60 minute charts are overbought, and the Emini is back in its 7 month trading range. This increases the chances of at least a few days of sideways to down trading starting this week With the October rally as strong as it was, day traders have to be prepared as well for a strong rally to a new high.

The momentum favors the bulls, but the buy climax in a trading range favors the bears. Neither side has a big advantage over the next few days and traders need to see more bars before they formulate an opinion.