The Emini broke above the September high by a couple of ticks and then reversed down. Since this is occurring after a buy climax, it reduces the chances of a strong bull trend day. The reversal down was strong enough to make the Emini Always In Short, but the rally yesterday was so strong that a trading range is more likely than a bear trend. Traders will look to sell rallies and buy pullbacks. If instead there is a strong move with strong follow-through, or a relentless trend up or down, traders will be more inclined to swing trade. Until then, the odds favor a trading range day. The bears will probably get a lower high and at least one more leg down.

Pre-Open Market Analysis
S&P 500 Emini: Learn how to trade the markets in a breakout

The Emini had rallied strongly off the higher low major trend reversal from last week. Traders learning how to trade the markets need to understand that this is a type of double bottom. The price action is now testing the September high, and the bears want to create a double top. The bulls want the rally to break above the September high, which is the neckline of the double bottom. They then want a measured move up to a new all time high.

The rally of the past 5 days has been strong enough to reduce the probability of a bear breakout and a 2nd leg down on the daily chart to about 50%. The weekly chart last week created a strong buy signal bar, and the buy was triggered by Monday’s gap up. This week is the entry bar and its appearance can give information about the probability of what will follow over the next few weeks. If the bulls create a big bull bar that closes on its high and above both the September high of 2011.75 and the moving average (around 2007), the odds are that the bear trend on the daily chart is over, and the probability of a rally to test the all-time high would be at least 50%. Next week is the follow-through bar on the weekly chart. If the bulls are able to create a strong follow-through bar, the bears will give up and the odds of a test of the all-time high would then be about 60%.

If today is a big bear reversal day that causes the weekly candlestick pattern to be a possible double top, the bears will still be in control. This is not likely, after yesterday’s strong follow-through buying. The next chance for the bears to demonstrate strength is next week. If the Emini breaks above the September high, the bears will try to reverse the breakout. This would create an expanding triangle bear flag with the August 28 and September 17 highs. However, the rally from the low has been so strong that the bears will need at least a small double top on the daily chart over the next week or two before they would be able to resume the bear trend.

More likely, the best the bears can get over the next couple of weeks is a trading range on the daily chart, and a pullback over the next month to around the daily moving average, which is around 1950.

The Emini is up about 6 points in the Globex markets and near the top of the broad bull channel of the past 3 weeks. It is also in a 2nd leg up from yesterday’s breakout. This increases the chances for a reversal down today, but the trend up has been strong so a reversal down would more likely become a bull flag than a bear swing.

The channel up over the past 6 hours on the 5 minute chart has had many pullbacks. This increases the chances of a bear breakout below the channel and the evolution into a trading range. The bottom of the channel was around 2,000, which would then be support. For the bulls, the key price is the September high of 2011.75. At a minimum, they want today’s close, which is the close of the weekly candlestick bar, to be near that resistance. They would prefer a close that it at least 5 points above it, which traders would see as a sign of strength. This would make traders more willing to continue to buy near the high of the rally, and less interested in waiting to buy a pullback.

The day session is Always In Long on the 60 minute chart. It is overbought and at the top of the 2 month trading range. This increases the chances that part of the rally was a buy vacuum test of resistance. Those momentum bulls will probably take at least partial profits in this area, and look to put their full position back on after a pullback. This increases the chances that there will be a pullback today or Monday. The obvious support is the psychological round number of 2,000, and then the 60 minute moving average, which is around 1980, but rising.

Although the bulls have been strong for 2 weeks, they are at their 1st important target. The odds are that they will take some profits, especially if there is a rally for the 1st hour or two, and that the upside today will be limited. Since they have been so strong, a bear trend day is not likely. Most likely, today will be a trading range day, and it will have at least one swing up and one swing down, each lasting 2 – 3 hours.

It is possible that today could be a huge trend day up or down. If one begins to form, those who trade the markets for a living will be quick to accept it and take a swing trade in the direction of the trend.

The daily chart of the EURUSD has been in a triangle since its strong rally that ended August 24. The bulls began a breakout last night, and are hoping to test the August 24 close of 1.1619 over the next couple of weeks. The bears want the breakout to stall at the September 18 high around 1.1460. That is still 100 pips above the current price, so there is room for a swig up. The 60 minute chart is at the top of a broad bull channel, and therefore can pull back at any time. As long as it continues to form higher lows, the bulls have at least a 50% chance of another 100 pips higher. The last 60 minute higher lows were between 1.1210 to 1.1260, and the bulls will get out below those levels. They will buy reversals up from pullbacks that hold above those levels.

The USDCAD sell climax on the 60 minute chart continued down overnight. I said yesterday that the bulls would probably get a swing up over the next few days. Their attempt yesterday failed. They will probably try again today. Although the 60 minute chart is in a strong bear trend, when the trend continues for 100 or more bars, the stop is far. Traders have to buy back some of their shorts to reduce their risk. That is what is likely to happen over the next few days, and it will probably result in a swing up that could go for at least 200 pips. Bulls will look for a reversal pattern or a strong bull breakout for a trade up that could last a few days. 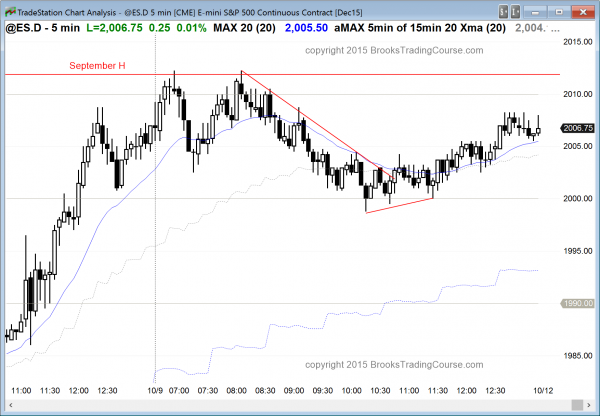 Today was a trending trading range day with weak swings up and down. It failed twice at the September high and turned down from a double top major trend reversal.

The bulls created a good entry bar on the weekly chart, but need a follow-through bar next week and a strong close above the September high. Without that, the 2 month trading range will continue. The reversal up over the past 2 weeks was strong enough to make it likely that a reversal down will be bought for a test back up.

The bears would like to totally reverse this week’s bull candle next week and have next week close on its low. The bulls want next week to close on its high. The appearance of next week’s candlestick will give traders an idea of what to expect over the next few weeks. The choice is either a test of the all-time high, or a continued trading range.