The Emini opened with a big gap down, but it lacked momentum initially in either direction. This is trading range behavior. The Emini is oversold and the odds are that it will have at least a couple of hours of sideways to up trading today, but it needs a bottom. Yesterday was in a bear channel for 5 hours and today’s gap down is a bear breakout below a bear channel. There is a 70% chance that it will fail, which means that it will trade sideways to up for at least a couple of hours. If today is a bear trend day, it is unlikely to be strong.

At the moment, the Emini is Always In Short, but the odds are that it will try to form a bottom and that it will at least have a trading range that lasts a couple of hours. Because the 1st hour has had trading range price action, the odds are that today will not be a strong trend day up or down. Traders will look for scalps up and down. The location is good for the bulls, but they need a strong bull breakout. They are currently hoping for a buy setup for a swing trade up. If they get it, they then need a breakout above the moving average. If they are unable to get that, then today might end up looking like Tuesday and just drift sideways to down in a weak bear channel.

Pre-Open Market Analysis
S&P 500 Emini: Learn how to trade the markets in a sell climax

The 60 minute chart of the Emini reversed down yesterday from a lower high in a bear trend. That is a head and shoulders bear flag. The initial target is Tuesday’s higher low of 1898.75. Day traders know that head and shoulders tops are trading ranges and that 60% of the breakout attempts fail. Then, the trading range usually continues. The bears want the breakout below that 1898.75 neckline and then a measured move down next week to the lowest close of 1871.25 and the bear low of 1831.

While the odds are that be huge bear breakout will be followed by a measured move down, the odds also favor more of a trading range after such an exhaustive sell climax. This means that even though the selloff this week has been strong, it will more likely end up as a sell vacuum test of support than the start of the next leg down on the daily chart.

However, the 5 minute chart had a Spike and Channel rally on Wednesday and Thursday, and traders learning how to trade the markets should expect an attempt a stabilization around the Wednesday higher low of 1916.25, which is the bottom of the channel. Spike and Channel rallies usually test down to around the bottom of the channel and then bounce. Today will open in that area, and it will also be around a measured move down from the height of yesterday’s range. Those trading the markets for a living expect that this might be support, especially when the Emini is oversold.

Today is Friday, and the nearest magnet is last week’s low. However, that is 80 points below the current Globex price and it will almost certainly not be a factor today. Instead, the candlestick pattern on the weekly chart will be an inside bar, which reflects the developing trading range on the daily chart.

Although the Yen was strong in Asia, it was flat in Europe, like the other major currencies. The unemployment report came out 1 minute ago, and the 5 minute chart of the EURUSD is having another bear breakout. It is testing yesterday’s low. If the bears can get below that, the next level of support is the August 18 higher low of 1.1017. The 60 minute chart is oversold, but there is no bottom yet, and the bulls might need a double bottom with that low before they are able to get a swing up.

The overnight tight trading range and last week’s tight trading range are the magnets above it the bulls are able to reverse the Forex cross up. At the moment, the 2nd 5 minute bar after the bear breakout on the unemployment report is reversing up. This means that bears are becoming less confident in continued lower prices, and bulls are beginning to bet that bear breakouts will fail. This is often an early sign that a bear channel is transitioning into a trading range.

If the bulls are able to have the 60 minute bear channel evolve into a trading range, those learning how to trade the markets will then begin to look for bottoming patterns, like a higher low major trend reversal or a strong bull breakout above the bear channel. Until then, bears will continue to sell rallies. However, today they are beginning to scalp instead of swing trading, and this is a sign that the EURUSD Forex market might be transitioning.

The EURJPY broke below its 3 month trading range last night, but those who trade Forex markets for a living know that most trading range breakouts fail. They will be watching for a reversal up today. The momentum down over the past 2 days has been strong. When that is the case, bulls usually need a strong reversal up before traders will conclude that the bulls are strong enough to take control for a swing up. The collapse yesterday morning on the 60 minute chart has just begun a 3rd push down.

This is a Spike and Channel candlestick pattern. The third push is usually the final push before the bulls begin a 2 legged move up. There is no sign that the reversal up has begun, but bulls will be trying to create a reversal today or Monday. The 1st target is the top of the channel just above 133.60. The bears want a continued swing down, but this is a sell climax pattern and a bounce for a couple of days is likely, and it will probably begin to stabilize today.

In most Forex markets, the 1st four 5 minute bars after this morning’s report have had breakouts with bad follow-through. This increases the chances the breakouts will reverse, or at least be followed by trading ranges. 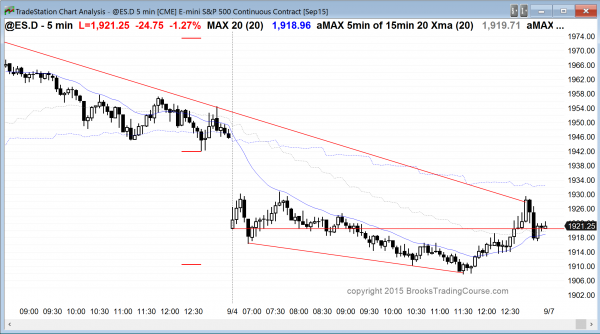 The Emini had a double top at the moving average and then entered a small pullback bull trend until 11:30. It reversed up from a wedge bottom and tested the open of the day.

Although the Emini had moving average gap bars at the end of the day and they often lead to one final bear leg before a major trend reversal, there is a 3 day weekend ahead, and the market could easily gap up or down when it opens on Tuesday, making the gap bars irrelevant.

The candlestick pattern on the weekly chart is a bear inside bar, which is a breakout pullback sell signal. Last week was a weekly buy signal. Confusion is a hallmark of a trading range, and that is what is most likely for the next several weeks. However, the daily chart is in a bear trend, and the odds favor an eventual measured move down. It might not come until after a test of the 2050 area, which is the bottom of the 7 month trading range.