The bears got 4 consecutive bars on the open and then a lower high, but the bulls got a strong reversal up from just above the moving average. The bears saw this as a double top. When that happens, the bulls hope that any selloff will result in a double bottom and the low of the day. When the price action creates reasonable arguments for both the bulls and the bears, the Emini is in breakout mode. Day traders need to see a breakout up or down with follow-through before they will be confident of the direction of the morning swing.

The bulls just got a strong breakout, but when there is a breakout mode open, especially when the Emini has been sideways for several days, there is usually not strong follow-through buying and a strong bull trend day. A weaker bull trend day is more likely, like a broad bull channel or a trending trading range day.

The breakout was strong enough so that the Emini is Always In Long and there will probably be at least one more leg up, but the rally might be disappointing and soon evolve into a trading range. Since a 2nd leg up is likely, the first reversal down will probably be minor and it will be bought. The bears usually will need a major trend reversal if they are to get a swing down. Otherwise, any reversal will be bought and it will probably be a bull flag or a bear leg in a trading range. If the bears are able to get a series of consecutive bear bars before there is a MTR top, they can get a reversal, but this would be a low probability event.

The Emini’s candlestick pattern on the daily chart has been a triangle since the bear trend began last month. Even though it might have a bull breakout and test either the bottom of the 7 month trading around 2030 before having at least a 2nd leg down, the odds at the moment are about 60% that it will have a 2nd leg down before it rallies much above the all-time high. When a breakout is as strong as the August one was, the odds are at least 60% that there will be a 2nd leg down and that the breakout will be followed by some kind of measured move down. The two most common are a leg 1 = leg 2 move and a measured move down based on the height of the bear breakout. If there is a bear breakout, the bulls hope that the measured move down is simply one based on the height of the triangle of the past several weeks. This would simply create a bear low that holds above last October’s low, and it would be a possible double bottom and end of the bear trend.

Everyone knows that the next market moving event is Thursday’s interest rate announcement. No one knows whether the breakout will be up or down. When the market is in breakout mode like this, there is a 50% chance that the breakout will be both up and down, meaning that the initial breakout will reverse and be followed by an opposite breakout. With half of the pundits on TV confidently saying that breakout will be up and the other half strongly saying that it will be down, online day traders should conclude that the Emini is perfectly balanced and the probability for the bull and bear cases is both 50%. However, any rally has a 60% chance of failing and being followed by a 2nd leg down on the daily chart.

Whenever a market is in breakout mode like this, day traders are always ready for the breakout to begin before the new. When it does, the probability is still only 50% that it will be in the direction of the move after the report. However, the premature breakout can still result in a big swing trade prior to the report. It is more likely that any swing up or down before the report will be limited to 2 – 3 hours and that the Emini will remain around where it is, in a trading range and at the apex of its triangle on the daily chart, going into the report. The odds favor a lot of trading range price action again today and tomorrow.

All major Forex crosses have been sideways for weeks, and some for the entire year. The daily chart of the USDCAD remains the one with the best potential for a breakout, and traders learning how to trade the markets should watch it carefully for a topping candlestick pattern or for a strong bear breakout. Traders who trade Forex markets for a living see the 3 week triangle late in a bull trend and know that the odds are that it will reverse for several weeks soon. What they do not is if it will break to the upside and then reverse down after a week or two, or simply break to the downside and have a least a couple of legs down the bottom of the wedge bull channel. That is the July 29 low of 1.2860, and it is also a breakout test of the January through April trading range.

While it is possible for it to have a bull breakout and begin another leg up, the odds are 70% that it will soon test 300 pips lower instead. In other words, there is a 70% chance that the next 300 pips will be down rather than up, even though the USDCAD daily chart is in a strong bull trend.

Although the EURJPY sold off 140 pips overnight, the selloff is a bull flag on the 60 minute chart after a 500 point rally on the 60 minute chart over the past week. The selling was strong enough so that the best the day trading bulls can reasonably hope today on the 5 minute chart is a rally within a trading range. However, the odds are that the trading range will form a base today or tomorrow for a test back up to last night’s lower high just below 136.50. 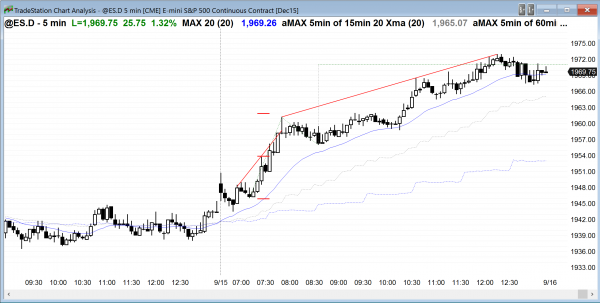 The Emini had an opening reversal from near the moving average and then a strong rally. After a 3 hour trading range, the bulls got trend resumption up.

The Emini broke above its 5 day tight trading range and tested the top of the 3 week trading range. Since today unfolded with a series of buy climaxes, there is a 75% chance that tomorrow will have at least a couple of hour so sideways to down trading, but there is often follow-through buying for the 1st hour or two.