The Emini opened with a big gap up, but closed the gap above yesterday’s high within the first 15 minutes and entered a tight bear channel. When there is a big gap up, the Emini usually has to go sideways to down until it gets closer to the moving average, which is close to the 60 minute moving average today. At that point, the bulls buy, hoping for an opening reversal and low of the day. The bears keep selling, hoping for a bear breakout and measured move down.

The selloff has been strong enough so that the first reversal up will probably be sold and the Emini will then have to test down before it can create a high probability bottom. The bulls have been making money since the open by buying below bars and scalping. This is more common when the the selloff is a bear leg in a trading range than when it is a strong bear trend.

However, at the moment the Emini is Always In Short, and this could become a bear trend day. More likely, the Emini will find support around the moving average and 60 minute moving average, and then bounce and enter a trading range. There have been many small bodies with prominent tails, lots of overlap, and profitable limit order buy scalps, and these are more common within trading ranges. Bears continue to sell because they are confident that the first reversal up will be sold and there would then be a test down that would allow them to exit their final short around breakeven.

The bears just had a strong breakout down to the moving averages, but it might be a sell vacuum test of support and an exhaustive sell climax instead of a measuring gap. If it is the end of the leg down, bulls should wait for a 2nd entry buy or for a strong reversal up before buying because the selling has been strong enough so that the 1st rally will probably be sold. The best the bulls should expect is a trading range for the next hour or so.

The bears want a continued selloff, but there has been enough hesitation in this selloff to probably limit the downside over the next hour. Swing bears will hold short until there is a clear bottom, and the bulls will need at least an hour to create one. Even then, the best they will probably get for at least an hour is a trading range.

My thoughts before the open: Intraday trading techniques at support

The Emini tested the 200 day moving average yesterday again, and it rallied overnight. It is forming a double bottom, but it has been in a trading range for a week as it waits for news from Greece. As long as it stays below last week’s gap down, the bears have slightly higher probability of a bear breakout. However, it is almost as likely that the bulls will get a bull breakout and a test of the all-time high.

The rally last night was in a tight channel, but it lasted over 50 bars and it is testing yesterday’s high. The odds favor a pullback early today. It might go mostly sideways for the first hour or two to relieve this overbought state, and this would create a breakout mode situation. The day trading tip is to avoid being too eager to enter, and instead patiently wait for a good signal bar in either direction, especially if it is a 2nd entry setup. Even if there is an early trading range, the ranges of the past few days have been big and that increases the chances for swing trades.

Yesterday was in a bear channel all day so there was a 75% chance of at least a 2 hour trading range or rally today. That goal will be met on the open with a big gap up.

A big gap increases the chances of a trend day, even though the Emini has been in a tight trading range for over a week. The odds are slightly greater for the trend to be in the direction of the gap, so a bull trend is slightly more likely. Because it is in breakout mode and waiting for news from Greece, it will probably remain within the 6 day trading range today and have a lot of trading range price action today.

The breakouts have had bad follow-through, the reversals have been abrupt (which reduces probability), and the bars have been big (which increases risk). Traders learning how to trade the markets need to be careful because reliable opportunities might be less common. When there is a doubt, wait for a 2nd signal or a strong breakout with good follow-through. 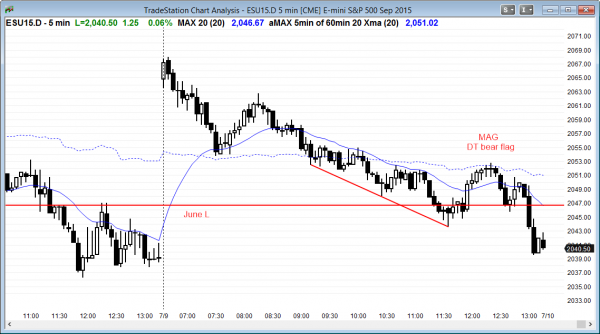 The Emini had a big gap up, but sold off in a trend from the open bear trend. It sold off at the end of the day again from a double top bear flag and a series of moving average gap bars (MAG) at the 60 minute moving average.

The daily chart of the Emini is in a trading range, but it is also in a bear trend. The odds of a successful bear breakout and test of the monthly moving average before breaking back above last week’s gap are slightly more than 50%, but with the uncertainty in Greece, the bulls still have almost a 50% chance of one more new high. There is still an 80% chance of at least a 10% correction this year and a 50% chance of a 20% correction even if the bulls get one more new high.

Traders learning how to trade the markets should look at the daily chart. The Emini has tested it each of the past 3 days, and yesterday and today did so with big bear trend days. This is not how successful tests typically look. This is how breakouts often look, and day traders have to be ready for more bear trend days and big bear trend days. Because there has not been a clear top on the daily chart, lots of bulls are continuing to hold. This creates a huge number of sellers if there is a bear breakout. Everyone will suddenly all agree on one day that the S&P is in a bear trend, and everyone will sell emotionally. Bears who have been waiting to sell until they see a big bear breakout will have their breakout, and they will sell any rally.

The Emini has not broken out yet, but this is the type of price action that often comes right before a breakout, and traders need to be ready. I have said many times this year that there is no logic in buying stocks until at least a 10% correction because there is an 80% chance of a correction. Those who have been waiting might get there chance at some point over the next few months. Can the market fall more than 20%? It is possible, but I think that it if falls below the October low (I think there is a 50% chance), that there will be buyers below for at least a strong bounce back up.

The Euro was weak and the dollar was strong overnight. The EURCAD is in a strong bear breakout for the past hour and the odds favor follow-through selling today. This, and other currencies, should provide opportunities for Forex trading for beginners. The selloff is testing the bottom of yesterday’s rally, and there will probably be a bounce soon. The selloff last night was strong enough for traders to look to sell rallies today.

The EURUSD had a bear breakout in Asia, but has been in a trading range for hours. It had a climax top after a spike and channel bull trend over the past 2 days and is now correcting down. The result will probably be a trading range for another day or more. It is also at the bottom of a month long trading range within a 6 month triangle. For today, traders learning how to trade the markets should realize that the target is the start of the bull channel from 2 days ago, and it is only about 40 pips below the current price. The downside breakout below the bull channel last night was strong enough to make the odds favor a 2nd leg down, but it might remain in the trading range of the past 5 hours much longer before that leg begins.

The USDJPY is trying to reverse up from a bear spike and channel pattern, but the reversal has not been strong. While a sell climax is usually followed by a swing up, there needs to be enough buying pressure. There does not look like enough yet and the USDJPY might have to test down 40 pips before it can rally further.