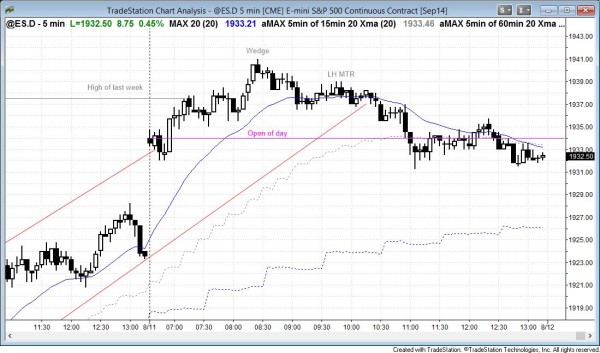 I posted this chart after the close. The Emini rallied above last week’s high and therefore triggered a buy signal on the weekly chart. However, the rally was weak, and very late in a 2 day bull trend. It was therefore likely to be part of a trading range and not a strong bull trend. The Emini reversed down from a wedge and final flag top, and then formed a lower high major trend reversal. As expected after the bull breakout above the bull channel, the stock market hit the bottom of the bull channel, and it reached it by going sideways instead of down. The Emini spent the final two hours in a trading range at the open of the day. Today spent most of the time in tight trading ranges. The Emini was a quiet trading range day and a doji candle on the daily chart.

Every bull bar in the first 90 minutes has had weak follow-through and this increases the chances that this rally will evolve into a trading range and that the day will be either a trending trading range day or a trading range day. This is especially true because the bull trend has gone on for over 100 bars without a significant pullback. The 8 am triangle is late in the bull trend and therefore a possible final flag. The initial rally was a bull breakout of a bull channel, so there are 2 chances out of 3 that the market will hit the bottom of the channel at some point today by either going sideways or down.

Although it is possible that the market could reverse down into a bear trend, especially since it is so overbought on the 5 minute chart, is at resistance, and has a wedge at 8:25, this is unlikely without first forming either a major trend reversal or a very strong bear breakout. If either happens, traders will swing shorts. Until then, all shorts will be scalps and bulls will buy for both scalps and swing trades, expecting a weak bull trend or a trading range.

The Emini last week bounced up from the weekly moving average. This means that last week’s candle is a buy signal bar for bulls who are hoping that the selling is over and that it was simply a pullback in a strong bull trend. The entry price for the bulls was 1 tick above last week’s high. This is also a lower high on the 60 minute chart. It was an obvious magnet for bull and bear day traders.

The bulls need a strong breakout above to show that the bears are not in control and that the selling was simply a pullback. The bears need to keep the Emini from going above, or much above, that lower high because otherwise the Emini is not in a bear trend. A bear trend needs lower highs and lows. The bear want a double top with that lower high, which would create a lower high major trend reversal. They want a bear breakout below last week’s low, which is the neckline for the double top. They then would expect a measured move down.