The Emini began with a weak breakout attempt above the all time high, creating a trading range open at a critical price. It is just above the September high, and the bulls want a breakout and measured move up. The bears want a double top.

Traders are waiting for a strong setup or breakout in either direction before taking swing trades. With the uncertainty of tomorrow’s election, the stock market might be mostly sideways until after the election. However, even if it is in a trading range, there will probably be swings up or down. Traders will patiently wait for a swing setup with a good signal bar, or for a breakout with follow-through before holding for swings. Until then, they will either scalp or wait.

The bulls were hoping that the gap up today would be a measuring gap and that the stock market would behave as it did after the 1994 election when the republicans took over the House. This led to the biggest bull market of our lifetimes. This high expectation creates the potential for a big disappointment and a reversal down, whether or not the republicans take control of the senate. The gap closed on the second bar of the day. 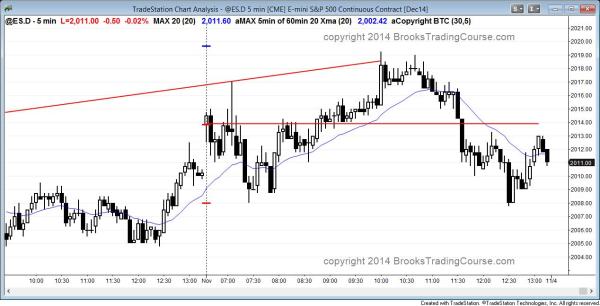 The Emini had a trading range day with 3 new highs of the day alternating with 3 new lows. It closed near the middle, creating a doji bar on the daily chart.

The Emini again tried to break above the September high and failed. The bears still hope for a double top or a higher high major trend reversal on the daily and weekly charts.

Today was the 13th consecutive day when the low held above the low of the prior bar. This is extremely unusual. Since today again failed to break above the September high and it had a bear body, the probability is high that tomorrow will finally create a pullback on the daily chart by falling below today’s low. However, the 1st bear breakout below a protracted bull microchannel is usually bought so the pullback will probably only last for a day or two. Since an extreme microchannel is climactic, the Emini is then likely to go sideways for a week or two before deciding on its next move.

Because the election results come out on Wednesday, there could be a gap up or down tomorrow or Wednesday, whether the republicans take the senate or not. Bulls see the republicans as better for the stock market. However, that might have already been factored in by the rally of the past several weeks, and the market might sell off even if the republicans win (buy the rumor, sell the news).

The bulls hope for a repeat of the huge bull that followed the 1994 election (Gingrich took over the House). This was the greatest bull market of our lifetimes. Since that kind of a trend is so rare, it is not likely to happen this time. The bulls need a strong breakout, which they have been unable to create over the past two days. The monthly chart is also extremely overbought. This will also tend to limit the upside potential and increase the chances of a big trading range over the next many months.

The bears want a gap down tomorrow or Wednesday, which would form an island top. This could be the start of a correction. Since the rally has been so strong for the past few weeks, there probably will be buyers around the middle of that leg up. The best the bears probably can get is a trading range over the next couple of weeks. Once in a trading range, they might generate enough selling pressure to then reverse the market down.

Until then, the bulls are still in control, but they need a strong breakout soon or they will be disappointed. Disappointment is one of the hallmarks of a trading range, and if they begin to sell out of their longs, the Emini will probably stay in the 200 point range of the past 6 months.