The Emini had a reversal up and a reversal down in the 1st 5 bars, creating a breakout mode candlestick pattern just below the 60 minute moving average, which was resistance yesterday. Day traders are looking for a breakout up or down, and then a measured move.

At the moment, the Emini just reversed down to the moving average, but there was no follow-through selling and the Emini is still Always In Long. However, it has been in a tight trading range for 10 bars and in between the 5 minute and 60 minute moving averages. There is no sign that there will be a strong swing up or down. Both bulls and bears have been making money with limit orders. This is a trading range day. There will be at least one more swing up or down at some point, and there might be a strong breakout with follow-through up or down, but until there is, traders are mostly scalping, waiting for the strong breakout.

My thoughts before the open: Options trading for a bearish candlestick pattern

The Emini Globex chart was in a trading range last night and the Emini is currently down about 3 points. The day session sold off for 2 days, and the selloff was strong enough to make yesterday’s late really more likely to be part of a trading range for several more hours.

As you know, I am bearish over the next several months, and my minimum target is a 10 – 20% correction before the end of the year. I have been saying this all year. Although the correction has not started, the Emini has also been unable to rally. Buy climaxes often take many bars to reverse, and since I am referring to the monthly chart, many bars means many months.

Nothing has changed and the daily chart continues in its 7 month trading range. Day traders look for sell setups when the Emini is near the top of the range, and they look for buy setups when it is near the bottom. The Emini is currently in the middle and it can do anything here.

The daily chart is in an area where traders will buy September or October puts to protect their portfolios, or to look for a trade down. Buying puts in the top third of a trading range requires a lot of management because trading ranges continue a long time, which means that both puts and calls usually end up mostly worthless. If a trader buys puts near the top, he needs to take part or all off in the bottom third of the range. Since the Emini’s chance of a bear breakout over the next few months is increasing, traders will be more willing to hold part of a put position to within a few weeks of expiration to allow for a possible bear breakout. If there is no bear breakout, they will then either sell out of their puts and wait to buy puts again near the top of the range, or they will hold a small part of their positions until expiration.

There is always an opportunity to put a position on. There is never a need to hold every option position to expiration and not take at least partial profits when they exist. Entering after a big breakout means buying more expensive options, but options traders then simply buy spreads instead of simple puts or calls. No problem. There is always a good trade.

Since the 60 minute chart probably needs to go sideways for a few hours, an early trading range is likely. However, the bulls are running out of time, and only one rally in the past 50 years was more overbought than the current one. The selloff can begin at any time. I mentioned yesterday that AAPL had a strong down day and that it broke below its 6 month trading range. Traders will look to see if there is follow-through selling today or tomorrow, or whether the breakout will fail and reverse up. Since AAPL is the world’s most important stock, if it enters a bear trend, that trend could be the start of the reversal in the overall market. 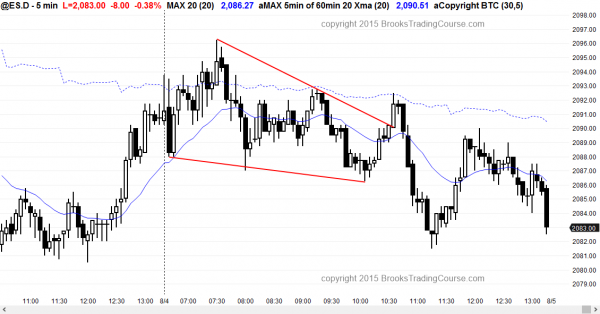 Today was a trading range day, as expected, but it was also a broad bear channel. There was a bear breakout of a big wedge bull flag at 10:55 a.m. The breakout failed and the Emini reversed back up into the upper trading range, but the channel down continued and the Emini closed near its low.

The 3 day selloff is a bull flag on the 60 minute chart, but there might be one more leg down before the bulls can create a reversal up. Traders should be aware that bear breakouts below bull flags are common, like the one on the 5 minute chart today,and this 60 minute bull flag might have a bear breakout, like after Friday’s unemployment report.

Most of the Forex markets overnight and for the past several days have been in tight trading ranges. One exception is the Aussie, which was strong overnight.

Traders learning how to trade the markets can see that the 5 minute chart of the AUDUSD is in the channel phase of a bull spike and channel pattern. The 240 minute chart is reversing up from a higher low major trend reversal in a bear trend that has lasted for 3 months. Although the overnight rally on the daily chart is simply one bar and it is at the moving average in a tight bear channel, the chart is oversold, and the February to May trading range above is a magnet. Those who trade Forex markets for a living expect a test of at least the 0.7600 area, which is the bottom of that trading range, and 200 pips above.

The daily chart of the USDCAD is continuing up in a 2 month tight wedge, which is a buy climax. The February to April trading range below is a magnet, as is the bottom of the channel. If there is a reversal, it will probably trade down to at least the top of the trading range around 1.2800, which is 300 pips below. The 60 minute chart reversed down last night and the reversal was strong enough so that there will probably be at least one more leg down after the current 3 hour rally ends. The price action candlestick pattern is a possible lower high major trend reversal.