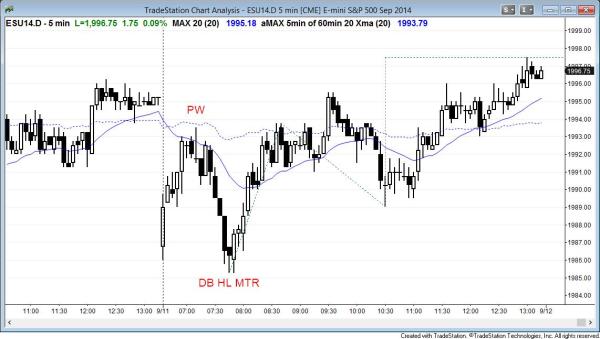 The Emini reversed down on the open at the moving average, but then reversed up sharply from the low of the day. This was a double bottom higher low major trend reversal after yesterday’s breakout above a 3 day bear channel, which is a bull flag. It formed a wedge bull flag at 11:00 a.m. and rallied to a new high of the day. By going above yesterday’s high, it broke out of the bear channel and stopped the 3 day pattern of lower highs and lows. The next target is the September 5 lower high. The bears will try hard to create a double top. If the bulls can break above it, then their chances of a bull breakout above the 3 week trading range go up.

Although the Emini candle on the daily chart is a bull trend candle (opening on its low and closing on its high), the 5 minute chart showed much more two-sided trading.

When both the bulls and bears have reasonable arguments, the market usually is in a trading range. Day traders are hoping for a breakout up or down. The range is at least half of an average day’s range. This increases the chances that any breakout will be followed by a few bars, and then another range, forming a trending trading range day.

The bears are currently having a breakout to a new low of the day. The Emini is always in short. Parabolic wedge tops that lead to a new low often have a small final flag and then a bull reversal. This can lead to an endless pullback in the form of a bull channel. This breakout is strong enough to have at least a little more down and it might become a bear trend day. If so, a trending trading range day is likely. The breakout is strong enough so that it might form a spike and channel bear trend. Bulls will try to create the reversal up, but until there is evidence of this, traders will look to sell.

The Emini has been in a trading range for 3 weeks. When it fell below last week’s low, it triggered a short on the weekly chart, forming a failed breakout above the July high.

It also triggered a 60 minute lower high major trend reversal short. The 60 minute breakout was small and the pullback was deep. The bull hope that the lower low is just a bear channel, which is a bull flag. They are buying, looking for a bull breakout of the bull flag, and then a rally to a new high. From there, they want a measured move up.

The bears wand the breakout to be the start of a bear channel. They want an endless pullback where the Emini looks like it is in a slightly downward sloping trading range. At some point, the bulls give up. They stop scaling in and sell out of their longs. This creates a big bear breakout, which becomes either a breakout gap or a measuring gap.

Until there is either a bull or breakout of the 60 minute bull flag (bear channel), the stock market is neutral.

The monthly chart is extremely overbought and will likely have a 100 – 200 point pullback within the next several bars. Everyone knows that September often has a selloff, but no one yet knows if it has begun. We need more information, in the form of a strong breakout. Until then, the weekly and monthly bull trends are intact.