The Emini opened with a big gap down. This created a Big Up, Big Down pattern with Friday. That therefore increases the odds of an early trading range.

There was a gap between the high of the 1st bar and the moving average. A moving Average Gap Bar usually leads to a rally. However, the rally typically will form an attempt at a major trend reversal. Consequently, the odds favor a trading range open for the 1st hour or two. The strong reversal up on the open makes a strong bear day unlikely. The big gap down and the gap bar make a strong bull trend day unlikely.

Friday was a small pullback bull trend day. Therefore today has a 75% chance of at least a couple hours of sideways to down trading, beginning by the end of the 2nd hour. In addition, there is a higher chance of a bear trend day after any buy climax day. However, until the bears get consecutive strong bear trend bars on the 5 minute chart, the odds continue to favor sideways to up trading on the open. There is a 50% chance of some follow-through buying in the 1st hour.

The month ends on Wednesday, and there might be some profit-taking after such an unusually strong month.

The Emini is down 6 points in the Globex market. After Friday’s huge trend, the odds are that today will be a much smaller day that will disappoint the bulls. This means that it is not likely to be a strong bull day. Furthermore, the bears will try to create a bear body. Hence, they want today to close below the open. Therefore, there is an increased chance of an early high, or a reversal down if there is an early rally.

The bulls have a 50% chance of at least some follow-through buying in the 1st 2 hours. In addition, Friday was a tight bull channel on the 5 minute chart. Therefore, the 1st reversal down will probably be minor (creating a trading range or bull flag).

There is a 75% chance of at least 2 hours of sideways to down trading that starts by the end of the 2nd hour. As a result, there will probably be at least one swing up and one swing down today. 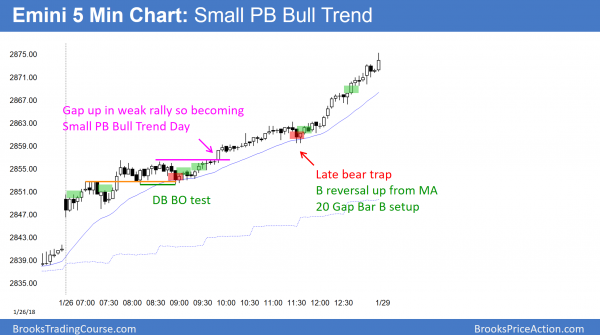 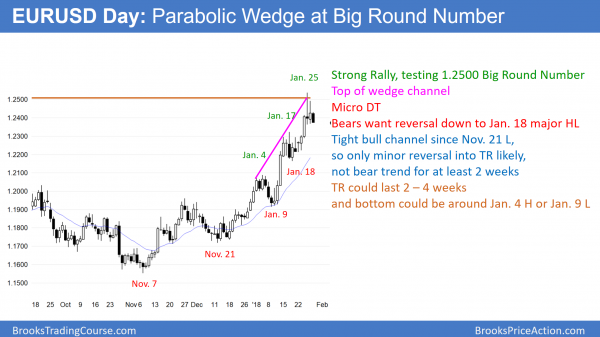 The EURUSD daily Forex chart is in a bull trend. Since the rally is in a tight bull channel with 3 buy climaxes, it is a parabolic wedge. There was a micro double top on Thursday and Friday. Finally, the buy climax is at the 1.2500 Big Round Number.

As strong as the rally from the November low has been, all trends eventually pull back. This one is showing signs that it is about to transition into a trading range. A trading range is a pullback that lasts 10 – 20 or more bars. If it lasts more than 20 bars, the probability of a trend reversal approaches 50%.

The rally from the November 7 low tried to for a top on November 27 after 2 legs up. Instead, the bulls got a strong breakout. That breakout led to 3 consecutive buy climaxes in a wedge channel. This is a 2nd consecutive complex top attempt. Second attempts have a higher probability of success.

The 1st goal of the bears is a pullback that has 2 legs and lasts about 10 bars. The pullback usually tests the bottom of the most recent buy climax low. That is the January 18 low of 1.2164, which is almost 400 pips down from the high. Of all of the things the chart can do over the next month, this is the most likely.

Trend resumption up or trend reversal down

Just like the late December rally broke above the November 27 top attempt, the bulls want a strong breakout and measured move up above last week’s top attempt. While they might get a breakout above last week’s high, the odds are that there will be sellers above and the breakout will fail. The series of buy climaxes over the past 3 months probably means the bulls are exhausted. Consequently, they will begin to take profits.

In addition, they will wait to buy again for at least 10 bars. They want to see if enough strong bears come in to create a bear trend. If the selloff is not strong, the bulls will buy for a test of the high. If their rally is weak, the chart will enter a trading range, which could last 2 – 3 months.

The EURUSD 5 minute chart last night had a 2nd leg down from Thursday’s high. The bulls want a double bottom and then a breakout above last week’s high. If they get their breakout, the odds are that it will fail because of the buy climax on the daily chart.

The bears want Friday’s high to be a lower high major trend reversal on the 5 minute chart. A strong breakout below Thursday’s low today or tomorrow would lead to a measured move down to around the January 18 low.

At the moment, the 70 pip overnight selloff does not have strong momentum. Consequently, the bulls will probably get a bounce from around current levels (Thursday’s low). However, the bears will sell rallies, hoping for a swing down on the daily chart.

The bulls will look to buy the current test of Thursday’s low. But, given the topping pattern on the daily chart, they will probably take profits above last week’s high. Consequently, the best they will probably get over the next week is a bull leg in what will become a trading range. 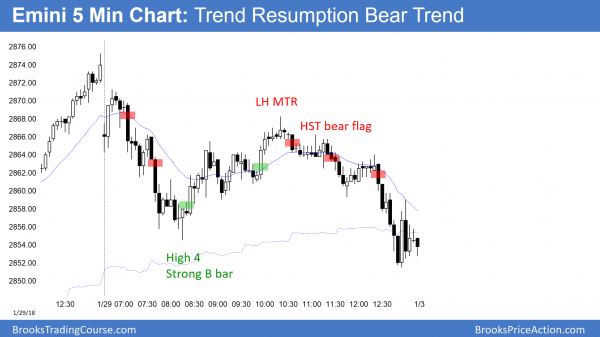 The Emini sold off early after Friday’s strong bull trend. After an attempt at a trend reversal up, the bear trend resumed into the close.

After Friday’s strong rally, today’s early selloff was likely to reverse up, and it did. The early selloff was deep enough to keep the rally from creating a strong bull trend day. The bears got trend resumption down to a 50% pullback of Friday’s rally. In addition, the selloff tested the 60 minute moving average.

It is a bear inside bar on the daily chart. After Friday’s buy climax, today is then a breakout mode bar. The bulls see it as a 1 day bull flag. Yet, the bears see it as a sign that Friday’s bull breakout will fail. It is not a good stop entry buy signal bar because it has a bear body. Hence, buying above or selling below are low probability trades. It is not a strong sell because the channel up on the daily chart is so tight. However, since there is a parabolic wedge top, today could be the start of a swing down.

Finally, there might be some profit taking in the final 2 days of the month after such an unusually strong month.