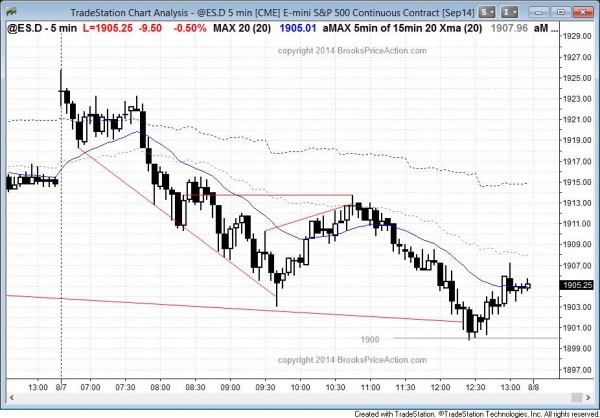 I posted this chart after the close. The Emini reversed down from above yesterday’s high in a big low 2 sell setup (an ABC bear flag). The strong bear breakout at 7:45 led to a bear channel, and the Emini entered a spike and channel bear trend. Bear trends are always forming wedge trend reversal setups. Most fail, but eventually the bull trend reversal comes from one of those wedge bottoms. The bear channel had consecutive sell climaxes and several strong bull reversal bars. The high of each became a target for bulls who scaled in lower. They try to get out breakeven on their first entry and with profits on their lower entries. The Emini reversed up from below yesterday’s low and formed an outside day. There was a series of moving average gap bars (gap between the low of the bar and the moving average) into 10:45, and they were followed by a test of the low of the day. A moving average gap bar in a bear trend usually leads to the final leg before a major trend reversal. The Emini reversed up from 1 tick below 1900, at a wedge bottom and from a big lower low major trend reversal.

Posted 8:05 am PST.
The most important price action in the Emini in today’s intraday report is failed opening trend reversal attempt by the bulls, and then the double top bear flag. Today’s gap up open formed the second leg up from yesterday’s lower low major trend reversal. The bears saw this as a big low 2 short setup (a big ABC bear flag), and are looking for a trend down to below yesterday’s low. It is a bear trend day at the moment.

After a strong bear breakout like this, the bulls will wait for either a second entry buy or for a strong reversal up. Bears will sell for any reason until the bulls take control. The stock market might form an endless pullback back up to the upper range, it might create a major trend reversal bottom, or it might form a bear flag and then get a bull breakout. Until the bulls take control, the odds favor more sideways to down. Since the Emini stalled at yesterday’s trading range bottom, today might end up as a trending trading range day. The bears need to do more to create a strong bear trend day. If the Emini forms a lower trading range, it might decide between trend resumption down and trend reversal up late in the day.

The stock market yesterday had a strong reversal up from a lower low major trend reversal so the odds favored a second leg up today, which the Emini had with its gap up open. Most successful reversals from major trend reversals usually end up creating big trading ranges instead of actual trend reversals, and that is what is likely to happen here. Bull day traders want the Emini to get above Monday’s lower high at 1937.50 as a sign that the bear trend has ended and has evolved into a trading range. Remember, a bear trend needs lower highs and lows, so if the market begins to go above prior lower highs, it is probably no longer in a bear trend. Bear day traders want a lower high or at least a double top there, with the creation of a double top bear flag.