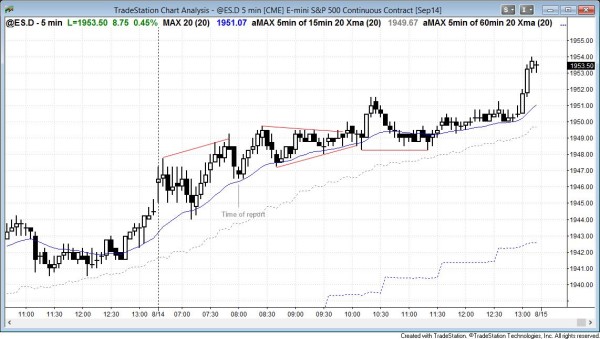 I posted this chart after the close.

The Emini had a bull trend opening reversal at the moving average, and then it had a relatively weak rally in a broad bull channel. The 7:50 a.m. wedge top and bear trend reversal failed. At 10:20 a.m., there was an exhaustive buy climax top just below a bear trend line and the July 31 gap. Traders see that gap as a bear breakout gap, and it is therefore important resistance. Because the market is close to the gap, the Emini might gap up above that resistance tomorrow. This would create an island bottom, which would be a sign of strength for the bulls, and it would increase the chances that the S&P500 will test the all-time high. However, if the Emini does not close the gap on the daily chart, the bears might be able to reverse the market down tomorrow. This is an important resistance area and the failure to get above it could lead to a second leg down on the daily chart.

The wedge top bear trend reversal at 7:50 a.m. has tight trading ranges below that are magnets. This is a possible high of the day and a reasonable short. If there is follow-through selling, this could be a bear trend day. Since the bulls had 5 consecutive bull trend bars, the Emini might enter a tight trading range before deciding whether to continue down or reverse back up. The market is now always in short.

Since the rally was weak and is late in a bull trend, if this top fails, the Emini probably will not continue up in a strong bull trend. Instead, the day would probably become a trading range day or a weak bull trend.

Yesterday’s tight trading range formed after a strong leg up, and it is therefore the possible final flag of the bull trend. This means that it is an area where both the bulls and bears feel the price is fair, and the bull breakout can be pulled back into this value area at any time today. Bear day traders will look for a failed bull breakout and then a trend reversal back into the trading range. The stock market might continue down into a bear trend reversal, but this is unlikely unless the bears create more selling pressure or have a strong bear breakout.

Yesterday, the S&P500 Emini closed above the moving average on the daily chart, but the bar was small and it followed two doji candle bars and an unclear base. This rally is weak on the daily chart so the odds still favor another leg down. The bulls are trying to erase the strength of the July 31 bear breakout, and want to close the gap above the high of that candle. The bears want the next leg down to begin and then for the Emini to fall below last week’s low for a leg 1 = leg 2 measured move. Since the Emini reversed down from the top of a weekly bull trend channel, there are about 2 chances in 3 that it will hit the trend line at the bottom of the bull channel. It can reach it by going down or sideways.

The bear trend on the intraday charts does not have to stop at the bottom of the weekly trend channel (the bull trend line), but the downside will probably be limited because the monthly Emini chart is in a tight bull channel. There is not enough selling pressure yet, and this makes it unlikely that the current selling will last more than a few bars on the monthly chart. Although it is possible for a huge trend reversal to occur out of a tight trend channel, it is rare. However, if the Emini does pull back for a few months, it can create enough selling pressure so that any test up on the monthly chart could be followed by a bigger move down.