The Emini gapped below the neckline of the 3 day double top bear flag, but reversed up sharply. However, yesterday’s selloff was steep and this increases the chances that the Emini will go sideways for many bars after the initial rally, rather than straight up to yesterday’s lower high at 2040. If so, it might form a higher low major trend reversal, which could lead to a test of the bear trend line above.

The bulls want this opening reversal to be the start of a reversal up from a 8 day wedge bull flag. The bears want it to be just another lower high in the bear channel that began at yesterday’s high. The reversal up is strong enough to that the bears will need the Emini to go sideways and generate more bear bars before traders will look for a swing trade down. Alternatively, if there is a strong downside reversal, even without a clear sell signal, bears will take control and swing trade.

At the moment, the Emini is always in long, but an early trading range is more likely than a strong bull trend because of how steeply down the market was at the end of yesterday. The bulls will probably need a higher low major trend reversal if the day is to become a bull trend day. The bears want the test of yesterday’s close to be the start of a bear trend, but the probability favors the bulls so far.

Here are my thoughts before the open. Yesterday was a bear channel and therefore a bull flag. This means that the Emini will probably have a rally lasting at least a couple of hours at some point today. There might be some follow-through selling first. The bears want a breakout below Wednesday’s low, which is the neckline of the 3 day double top bear flag. If they get that breakout, the bulls will buy it, hoping to create a 4 or 9 day day wedge bottom.

As I am writing, the Emini looks like it will gap below yesterday’s low and open very close to Wednesday’s low of 2016.25, which is the neckline of the 5 minute and 60 minute double top bear flag of the past 3 days. It will then decide whether the double top will succeed and lead to a measured move down, or fail, and lead to a reversal up.

Today is Friday so weekly support and resistance will be magnets today. The current low of the week is 2016.25, the low of the November 21 breakout bar, which this week is reversing, is 2024.25, the low of last week is 2041.25, and the midpoint of this week is 2044.13. The bulls want a reversal bar, which means a close above the midpoint, and the bears want the bar to close in its lower half.

The most important decision that the Emini has to make today is whether yesterday’s selloff is the start of a breakout from the 3 day double top on the 60 minute chart, or simply a pullback from the breakout of the 5 day wedge bull flag on the 60 minute chart. The bears need a breakout below yesterday’s low, which is the neckline of the double top. The bulls need the current selloff to stay above yesterday’s low. They will then try to form a 2nd leg up after the wedge bottom. The probability for both is about 50%. If the Emini falls below the neckline, which it might, depending on the size of today’s gap down and whether there is follow-through selling, the bulls will try to create a larger, 9 day wedge bottom, and reverse the bear breakout.

The stock market is overbought on all time frames and this increases the risk of a selloff. The minimum targets are the September high of 2005.75 and the October 31 gap of 1987.25. The 50 day moving average is near the 2,000 round number. 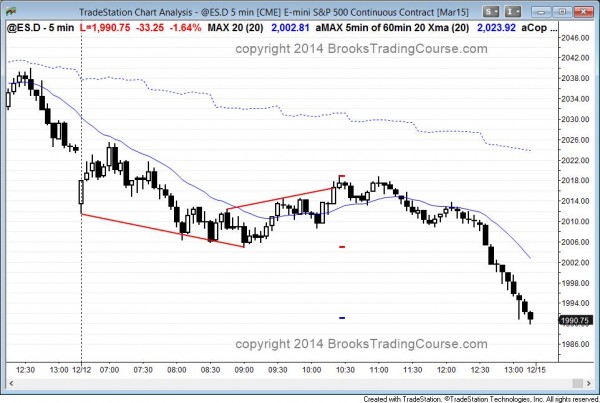 As was likely after yesterday’s bear trend channel, the Emini reversed up for two legs and two hours today. However, the Emini collapsed into the close.

The Emini was in a trading range for most of the day, but collapsed in the final hour to close below 2,000 and the September high. The bears want a gap down on Monday, which would create a 2 month island top. However, the odds of that are only about 1 in 3. Although it may not appear to make sense, after a sell climax into the close, there is a 2 in 3 chance of a gap up instead. Regardless of whether the Emini gaps up or down on Monday, it will probably soon fall below the October 31 gap of 1987.25.