The Emini reversed down from yesterday’s high, triggering an expanding triangle top, but this followed 4 consecutive bull bars so the odds favor buyers below the sell signal bar and at least one more push up. The bears will get higher probability if they wait for a strong reversal down or for a 2nd entry short. The bulls are hoping that this reversal is just a pullback from the breakout above yesterday’s high, and that they can get the market closer to the 2059 top of the 60 minute trading range.

Although the Emini is always in long from the 4 consecutive bull bodies, it is in a zone where it can form the high of the day (yesterday’s high, expanding triangle top). The bears need a strong reversal down or a 2nd entry short. Without that, the bulls will swing trade since there is room to resistance above.

My thoughts before the open: Testing the top of the trading range

The key force controlling the market is the trading range. The Emini is still testing the top of the range. Until it breaks out, traders will short near the top and buy near the bottom. Since the range has lasted a month on the daily chart and that is a long time, the breakout will probably be soon. There is still a slightly better than 50% chance of a bull breakout because the daily chart is in a broad bull channel. Once there is a breakout in either direction, there is a 50% chance it will fail and reverse.

With today’s big gap up to just below the top of the range, the initial upside will probably be limited. There might be a rally for an hour or so, but if there is, the Emini will then probably go sideways to down until it gets closer to the moving average. At that point, it will decide between trend resumption up or trend reversal down.

A big gap up can lead to a trend from the open bull or bear trend. If there is a strong rally initially, the Emini might go sideways for an hour and then enter a bull channel. This would create a gap spike and channel bull trend.

If there is a strong bear reversal bar on the open or within the first few bars, the day could become a trend from the open bear trend.

Traders will be cautious initially because the market will gap up high enough to make traders wonder if it is too high. Because there is a higher chance of a trend day when there is a big gap, traders will be ready to swing trade. Most will wait for a clear setup or for a strong breakout with follow-through. Until then, they will mostly scalp. 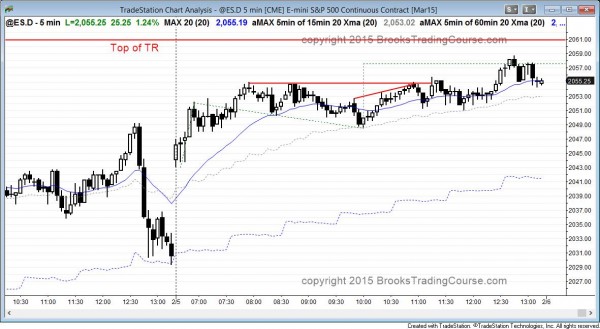 The Emini had a brief rally that reversed yesterday’s late selloff and it then entered a trading range until the last hour. It rallied to test the top of the month long trading range, but it failed to breakout. There was also a leg 1 – leg 2 measured move where leg 1 ended with the 5th bar of the day and not the 7:55 a.m. high.

Bears will sell up here tomorrow because their risk is small (to 1 tick above the 60 minute double top at 2061). They know that the probability is small when the risk is small, but the reward is so much bigger than the risk that the math is good. Since the Emini is so close to the top of the trading range, there could be a big move up or down tomorrow. The bulls might be able to get a gap up above the top of the trading range, or a breakout above, and the bears might get a strong reversal down. Traders will be looking for a swing trade tomorrow.

Tomorrow is Friday so traders will be looking at weekly support and resistance, especially in the final hour. Last week’s high was 2054, and the double tops are at 2059.25 and 2061.00.