Although today opened with a big gap down, the odds favor a rally lasting at least two hours today, although there is often follow-through selling for an hour or so after a sell climax. The gap down was below the bottom of a 3 day bear channel and the odds favor a reversal up to the top of the channel, which might take a couple of days. At the moment, the Emini is always in long and bulls are swing trading and scalping. Most bears do not want to sell until at least a couple of legs and 10 bars up.

My thoughts before the open: Sell climax in a bear trend

The Emini had consecutive strong bear trend days and today will probably open with a gap down. This is extreme and therefore unsustainable, climactic price action. It is testing the low of the month. The month’s candle closes next week and it is a sell signal bar.

The fight over the remaining days is over the size of the tail at the bottom of the bar. Since the bulls have decided to allow this test down, they were expecting the test of the low of the month (the March 11 low of 2030.75). They will probably buy this test to keep open the possibility that the correction from the all-time high is just a big High 2 ABC bull flag. This is the area where they need to buy. The bears will probably let them buy today because the bears still have several days left to achieve their goal of a close on the low of the month.

The odds favor a sideways to up rally today that lasts at least a couple of hours. 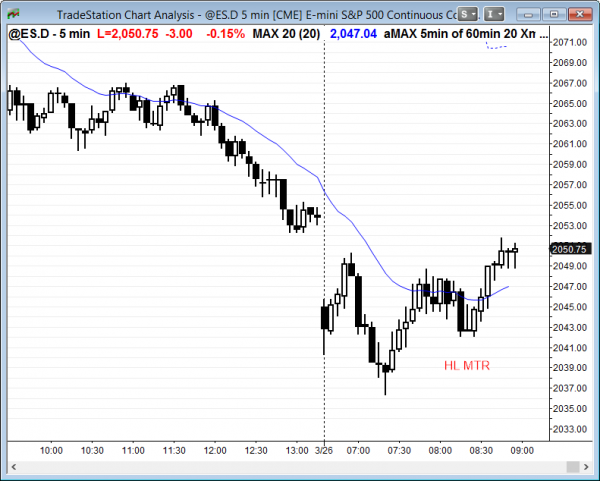 I left after 2 hours today. The bulls got a higher low major trend reversal, but the selling has been so strong that the rally might end up as a bull leg in a trading range day.

The bears had a gap down below a bear channel and there was a 70% chance of an early reversal up, especially after a series of consecutive sell climaxes on the 60 minute chart. The 2nd reversal up was followed by a higher low major trend reversal and two legs up. This was also the minimum objective for the sell climax. For the rest of the day, traders will be deciding between a bull trend day and a trading range day. With the open in the middle of the range and with the strength of the selling for 3 days, the odds of a bull trend day are not as high as they might otherwise be. There is always the possibility of a strong bear reversal later in the day, but that is not likely at the moment.

There might be follow-through buying tomorrow since the bears still have 2 other days left to the month to get a strong bear close on the month. The bulls obviously want today’s rally to be the start of several days up so that the monthly candle is less bearish when it closes next week.