The Emini opened with a sideways series of bars that had prominent tails and small bodies. While it is Always In Long from yesterday, this is trading range price action. It therefore increases the chances of a lot more of it today. This is especially true after 5 dojis bars on the daily chart. Hence, this means that there will probably be a swing down and a swing up today. The market is deciding which will be 1st. The location is good for the bears, but the momentum up is good for the bulls. Therefore trader need a sign that one side is winning. That usually comes from a strong breakout up or down, but sometimes can come from a good buy or sell signal bar.

It is at the resistance of yesterday’s high, last week’s high, and most importantly, the August 26 major lower high. The bears want a swing down from resistance, like they got yesterday. The bulls need a strong breakout above that August 26 lower high. If they succeed, they would then probably get a new all-time high.

Last week formed a buy signal bar on the weekly chart. Because last week’s candlestick had a prominent tail on top, it is a weaker signal bar. Furthermore, it was the 6th doji in a tight trading range. Hence, this lowers the probability that there will be a strong bull breakout. Yet, it is a buy signal in a bull trend, and the Emini tested it today. If the bulls can hold above it, the next target is the all-time high, which is about 8 points higher.

The probability slightly favors a bull breakout of the 2 month trading range and a test of the targets from 2200 – 2220 above. Because the stop for the bulls is so far away, bulls will probably use a rally to a new high to take profits. The odds are that there will be a 100 point pullback before the Emini rallies much beyond the 40 points needed to get to the 2220 measured move target.

While yesterday was a reversal day, it was mostly a trading range day. It therefore was like most days for the past 2 months. Traders should expect every day to have mostly trading range price action until there is a convincing breakout of the 2 month range.

While yesterday rallied, it failed to get above the small double top at the all-time high. The Emini traded sideways overnight. It is therefore in a bull flag and the probability favors at least a little more up today. Furthermore, as I have been writing for 2 months, the odds still favor at least one more new all-time high up to the 2200 – 2220 targets.

The bears will try to prevent any rally from going above the August 26 lower high. They want the series of subtle lower highs and lows to continue because that is an early bear trend. The odds favor a bull breakout to a new all-time high, and it will probably come this week. If the bulls continue to fail, they will give up. The Emini would therefore reverse down. Hence, the bears would try to create a bear breakout below the monthly long wedge bull flag. 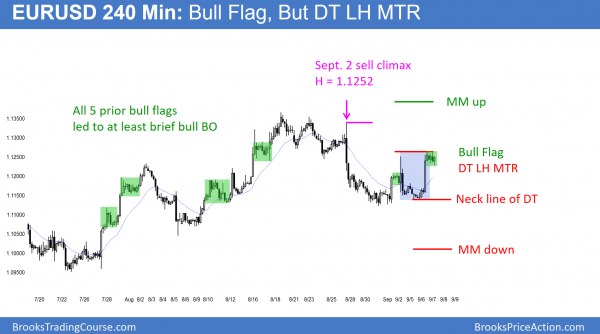 The 240 minute EURUSD Forex chart rallied strongly yesterday, yet has been in a tight trading range since. That is therefore a bull flag. The bears see the rally as a test of the September 2 lower high. Hence, they see a Double Top Lower High Major Trend Reversall (DT LH MTR).

The EURUSD Forex market reversed up strongly yesterday. The next target for the bulls is the August 26 sell climax high of 1.1340. The need follow-through buying today. Yesterday’s rally was strong enough for the bulls to try for a 2nd leg up today. There have been 5 similar bull flags over the past 2 months. >Each has had at least a brief bull breakout. Hence, the odds favor at least one more push up.

The bears want yesterday’s rally to fail and break below the neck line of the double top. They then therefore want a measured move down. That would also be the right shoulder of a small head and shoulders bear flag on the daily chart.

The EURUSD Forex market traded in a 30 pip range since yesterday’s bull breakout. The odds favor at least a brief bull breakout. Yet, if there is a strong bear breakout, traders will conclude that the bears are winning, and they will swing trade their shorts. 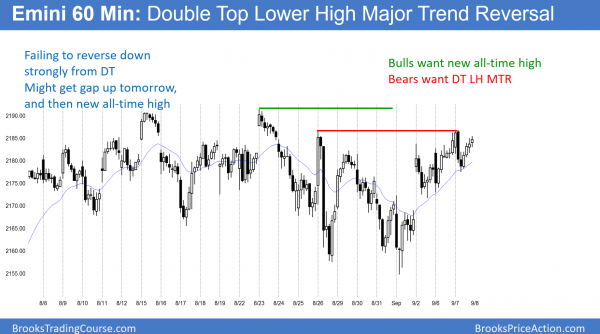 The Emini sold off on the open from a double top with the August 26 high. It then reversed up from the 60 minute moving average to close near the open. Hence, it was the 6th consecutive doji candlestick pattern on the daily chart.

Today was the 6th consecutive doji candlestick pattern on the daily chart. Yet, the trend is still up and the odds favor at least one more new high.

The bears formed a double top lower high major trend reversal today on the 60 minute chart. Yet, the reversal up in the middle of the day increased the odds of a breakout above that double top this week. Bears wanted a relentless reversal down. Because the Emini rallied back up, the odds favor a bull breakout and possibly a gap up tomorrow.