The Emini opened with a gap down and formed a Trend From the Open bear trend. There was a sell vacuum test of the 60 minute moving average. While this might become the low of the day, the bulls will need a series of bull bars before traders believe that the low is in.

Today might continue down as a Spike and Channel bear trend. The bears need a strong breakout below the 60 minute moving average. Because the selloff stopped at major support, traders suspect that the Emini will begin to enter a trading range. This is especially true because the Emini spent most of Friday in a trading range.

At the moment, the Emini is Always In Short. While the odds slightly favor a bear trend day, the bears need a strong break below the 60 minute moving average. A bull trend day is possible, but unlikely, especially because of how overbought the daily chart is.

Because of this early confusion, the most likely price action over the next hour or two is a trading range. The bears will see a wedge bear flag or double top. The bulls will see a micro double bottom or a double bottom. Traders will mostly scalp until one side clearly takes control.

The Emini sold off strongly last week, yet reversed up just as strongly. The main force controlling the Emini at the moment is the all-time high in the cash index. While the cash index has turned down many times from below its July 2015 all-time high, it has reversed back up sharply each time.

Because the cash index closed on Friday only 32 points below the high, and the momentum up last week was strong, there is a 60% chance that it will again rally to within a few points of the high. There is a 50% chance of a new high, and a 40% chance of a sustained breakout.

A buy climax is usually followed by a trading range. While the odds favor a new all-time high in the Emini, the Emini will probably have to go sideways for several days this week. The stop for the bulls is below last week’s low. That is about 110 points below Friday’s close. This creates a lot of risk for the bulls. The easiest way for them to reduce risk is to sell out part or all of their position. Therefore, the selling by the bulls will result in at least a few sideways days.

Once traders conclude that the selloff is only a pullback and not a reversal, they buy again. As a result of buying after a pullback, their stop is much closer. Many will raise it to below the bottom of the bull flag as soon as there is strong day or two up.

The Emini is down 11 points in the Globex session. As a consequence, it might be starting the pullback that I mentioned over the weekend. The bulls are hoping that last week’s momentum was strong enough to lead to a new high. The bears are hoping that the selloff that ended last night is the start of a bear trend. The odds still favor bulls buying the 1st reversal down. This will probably result in a new high.

The selloff that ended last week was strong enough so that it might actually be a Spike that leads to a huge Spike and Channel bear trend. The current rally, even if it reaches a new high, might be the pullback from that Spike. If so, it would then lead to a bear channel. The channel can go far beyond a measured move down from the double top with the June 24 high. 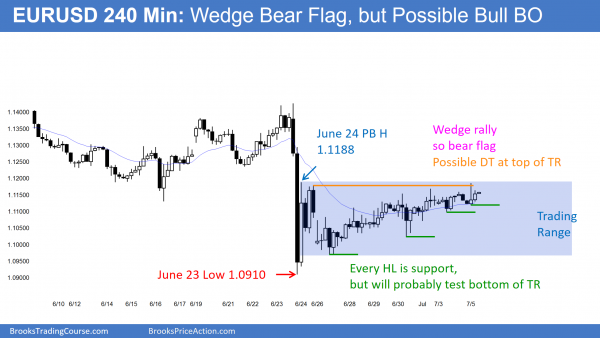 The EURUSD 240 minute Forex chart is in its 8th day of a weak rally. This is a bear flag. Every new bar increases the probability of a bull breakout and a measured move up. The probability of a bear breakout is still about 55%. Yet, there is a 60% chance that bulls will buy a test of the June low and the trading range will continue.

After the huge June 24 bear day, I said that the odds were that it was an exhaustive breakout and not the start of a new leg down. As a consequence, the probability was that the EURUSD Forex chart would rally for 1 – 3 weeks. This would create a bear flag. The more bars that the bulls add to the flag, the less likely there will be a successful bear breakout. If the current bear flag grows to around 20 bars, the odds of a bull breakout and measured move up will be about at high as for a bear breakout.

The selloff was strong enough so that there will probably be at least one test down and possibly a push below the June 24 bear low. Because that bear day was the biggest bear bar in more than 20 bars in the bear trend, the odds are bulls will buy bear breakout of the bear flag. This will then create either a double bottom and a reversal up, or a bounce and lead to more bars in the trading range.

The rally on the daily chart is in its 8th day. It lacks consecutive big bull bars and most of the bars overlap. This looks like a bear flag, which I have been talking about for 2 weeks.

While there was a surge up 6 hours ago, the EURUSD Forex chart has been sideways since. Most of the 5 minute bars in the 8 day bear flag have been within trading ranges. This is what typically happens in a leg within a trading range on the daily chart.

The rally on the 60 minute chart is a broad bull channel. As a result, there is a 70% chance of a bear breakout and then the start of a trading range. There is no sign yet that the channel has ended and the trading range has begun. However, the 5 minute chart continues to spend most of its time within trading ranges. As a result, online day traders are mostly scalping for 10 – 20 pips. 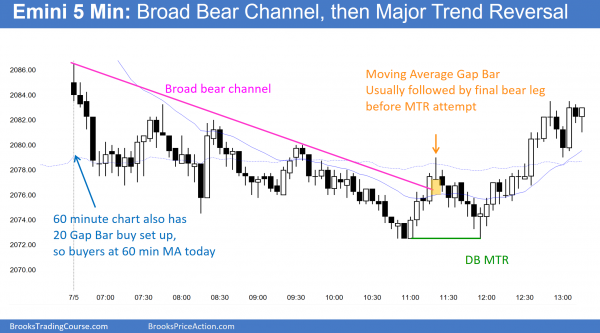 The Emini gapped down and sold off in a broad bear channel, After a Moving Average Gap Bar, it sold off to form a DB MTR (Double Bottom Major Trend Reversal). The 60 minute chart had a 20 Gap Bar Buy Setup today, and the bulls bought the 60 minute moving average. As a result, today closed well above that average.