The Emini reversed down from above yesterday’s high, but it lacked consecutive big bear trend bars. The odds are that yesterday’s bull channel was a bull leg in what will become a trading range. The Emini is Always In Short, and it probably will test higher lows in yesterday’s channel. It might even test below yesterday’s low and form an outside down day. Because of yesterday’s trading range price action, today’s lack of strong follow-through selling, and both bull and bear scalper’s making money, the odds are that today will have a lot of trading range price action. The bulls are hoping that this early selloff reverses up, like yesterday, but the odds are against a strong bull trend day, despite the magnets above. More likely, it will test higher lows in yesterday’s channel and be mostly sideways today with a lot of limit order trading.

If there is a strong breakout up or down, traders will swing trade, but until that happens, day traders will continue to mostly scalp.

Yesterday gapped up. When it gaps up and breaks out, it often goes sideways the next day. It then resumes up or reverses down, often with a gap, creating an island top. The odds favor up because there are several resistance levels just above, and they are magnets. The Emini is close enough so that it probably cannot escape the magnetic fields and will have to reach them. At that point, it decides between a reversal down from a double top and a breakout.

The Emini is only up 2 points in the Globex session. The rally during the 2nd half of yesterday was in a channel. A bull channel is a bear flag. There is a 75% chance of a bear breakout below the channel. There might be a bull breakout first, which would then fail and reverse. The bear breakout can come from a selloff or by the Emini simply going sideways for a couple of hours.

Can the breakout to a new all-time high be followed by a 300 point measured move up, based on the height of the 2 year trading range? It is possible but not likely at this point. The 2 year trading range will probably be the Final Bull Flag on the monthly chart. The bull breakout will probably fail within about 5 bars. Five bars is 5 months, so the rally could last a long time before it finally fails.

Yesterday’s rally was weak and gap up near the top of a 2 year trading range both reduce the chances of a strong day up or down today. There probably will be at least one swing up and one swing down. A strong trend can come at any time, but it is more likely when the context is right. This is not one of those times. The odds favor a lot of trading range price action today.

The EURUSD had a flat, poorly shaped wedge top on the 240 minute chart. Yesterday was the bear breakout. Even though the wedge was mostly a trading range and not a buy climax, the selloff and the wedge make it likely that there will be a 2nd leg sideways to down over the next several days. This means that the first reversal up will probably be sold. The EURUSD is trying to hold at its 20 day moving average, and that could be the reason for the bounce. It might test the 1.1340 bottom of the 8 day tight trading range before the 2nd leg down begins.

The selloff was not strong. It had 8 consecutive bear bars on the 240 minute chart, but the bars were not very big. This makes it more likely a bear leg in a pullback or trading range than the start of a bear trend. The key price on the downside is the most recent higher low around 1.1140. The EURUSD 240 minute chart is in a bull channel as long as it keeps forming higher lows. If it falls below that low, it will have converted into either a trading range or a bear trend. The bulls will try hard to prevent that from happening.

Since a bounce and then a 2nd led down are likely, the EURUSD might go sideways for a day or two to create a small base that could support the bounce. Then, day traders will look for a 2nd leg sideways to down, which would be a test of the 1.1140 higher low. Bears will see the bounce as the right shoulder of a head and shoulders top on the 240 minute chart. Tops have about a 40% chance of success, so the odds of a trading range or a continued bull channel are greater that those of a big selloff down to the March lows around 1.0800. 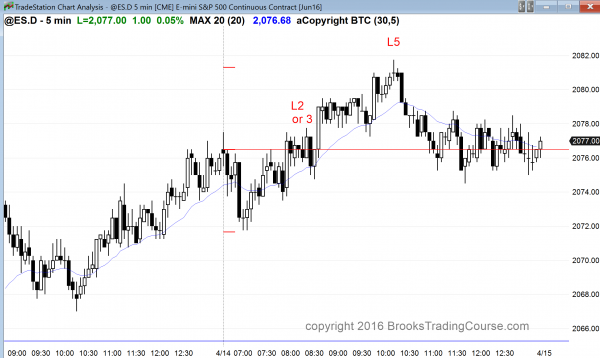 The Emini rallied in a weak channel to a measured move up from the low to the open, and then reversed down from a Low 5 sell setup. It closed near the open and formed a doji day.

Coming into the day, I mentioned that today would probably be a trading range day after yesterday’s bull breakout. It rallied to a measured move and then sold off to settle around the open, forming a doji day.

Yesterday’s breakout was strong enough to make higher prices likely, even though the Emini is at the top of a 2 year trading range. There is now about a 50% chance of a new all-time high. However, the old high is about 25 points above the current Emini price, and 50 points above the current cash index price. There would be a divergence if the Emini made a new high, but the cash index did not. That is really not important. What is more important is if both begin to turn down in this general area. A prior high is always resistance, and in general, there is a 50% chance of a reversal down and a 50% chance of a breakout above.

Tomorrow is Friday so weekly support and resistance can be important, especially at the end of the day. The December, November, and all-time highs above are all close enough to be reached in a day, although this is not likely. Last week’s high is just a few points below.

Most of the days over the past few weeks have had swings up and down, so that is what is likely tomorrow as well.