The Emini sold off strongly on the open from just above yesterday’s high. This is probably the start of 2 hours of sideways to down trading. The selling was strong enough to make a bull trend day unlikely. There is about a 75% chance that today will be either a trading range day or a bear trend day.

The Emini is Always In Short, but probably will enter a trading range soon for an hour or more.

The Emini had a strong bull trend after yesterday’s Fed announcement. It was also the 3rd day up from the bottom of the 2 month trading range. The top of the trading range is around 2100, just below the all-time high. Just as the momentum down last week was strong and the bear breakout failed, and the momentum up was strong in early November and again in early December, but those breakout attempts failed, the current rally will probably also fail to have a successful bull breakout because of the 80% rule. In a trading range, no matter how strong the rally or selloff, 80% of breakout attempts fail (and, in a trend, 80% of reversal attempts fail!).

Yesterday’s rally on the 5 minute chart was strong and it occurred with 3 buy climaxes, which is a wedge top. There is a 50% chance of follow-through buying for the 1st hour or two today. There is a 75% chance of at least a TBTL (Ten Bars, Two Legs) sideways to down correction starting by the end of the 2nd hour, and only a 25% chance of a relentless strong bull trend. Bulls will look for signs of an early rally to buy. Bears will look for an early reversal down. If instead there is a rally, bears will look for a top within the 1st 2 hours for a swing trade down.

Beginners learning how to trade see a strong bull breakout above the top of a bull channel on the 60 minute chart. Those who trade for a living know that 75% of breakouts above channels fail within about 5 bars. There have already been 2 bars above the channel, so using this logic, there is a 75% chance of a reversal down to test the bottom of the channel within the 1st 3 hours. The bottom of the channel is 20 points below, but it is rising fast. The Emini can get there by going mostly sideways instead of down. This means that if today is a trading range day, it could touch the bottom of the bull channel today without selling off much to get there.

The bears see yesterday’s big bull trend bar on the 60 minute chart as a probable buy climax and a 2nd leg trap. For them, it is an exhaustion gap instead of a measuring gap (the gap is the space between the close of the big 60 minute bull trend bar and the high of the hour before). They are looking for a reversal down to test the bottom of the bar, which is around 2040, today or tomorrow.

At the moment, the Globex market is up 4 points and around yesterday’s high. While there could be a 4th or 5th push up in the wedge bull channel, that would be unusual. When there is a series of buy climaxes, the market usually runs out of buyers. The final bears buy back their shorts. The bulls begin to take profits because they are afraid of a quick reversal and giving back a lot of their windfall profits. They begin to only want to buy a pullback.

Aggressive bears who will never buy back their shorts begin to short, expecting a pullback. Once the balance tips in favor of more sellers, the pullback begins. This is likely to happen within the 1st 2 hours today on the 5 minute chart. The 60 minute chart might pull back for only a couple bars and then have one more test up. Yesterday’s 60 minute bar was big enough so that there is a 50% chance of one more leg up before a bigger pullback (a day or 2) begins on the 60 minute chart.

The EURUSD had 2 legs up on the daily chart from the bottom of a 9 month trading range. The bears see the rally as an ABC or Low 2 bear flag. The bulls see last week’s rally as an unusually strong reversal up from support and expect a 2nd leg up after a pullback. I have been saying that there will probably be at least a 50% pullback from the rally, which is around 1.0800 and the December 7 1st pullback.

The 60 minute chart had a bull channel after its spike up (a spike and channel bull trend). The channel usually becomes a trading range, and the bottom of the channel is a good candidate for the approximate bottom of the range. The EURUSD can turn back up from above that magnet, or it can fall another 200 pips below. It does not matter. The bulls still have about a 60% chance of a test back up to the 1.1050 area within the next few weeks.

There is only a 40% chance that the bears are right. However, if there is acceleration down, the probability that the bears will get a new low below the December bottom of the bull reversal will quickly increase to at least 50%.

The bears want a strong breakout below the December 7 low and then a measured move down to last week’s low. There is about a 40% chance that they will get what they want and a 60% chance of a 100 pip bounce up to the middle of the range, and the bounce probably will start within the next 3 days.

The 5 minute chart has been sideways overnight. Day traders expect the trading range price action to continue into the US session. If it does, they will look for 10 – 20 pips scalps, and many will use limit orders to buy near the bottom of the tight range and sell near the top. If there is a strong breakout up or down, they will look for a 50 pip swing trade. The downside is probably limited over the next few days because the EURUSD is oversold on the 60 minute chart and near support. 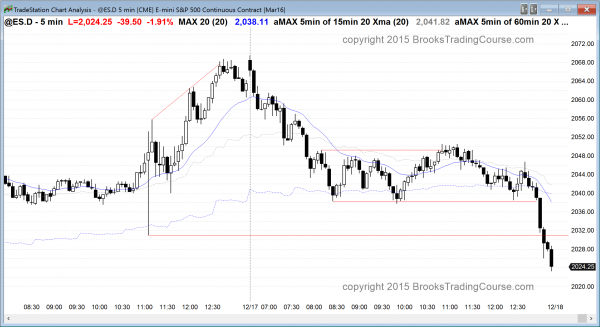 The Emini sold off from above yesterday’s high and closed below yesterday’s low, forming an outside down day. It was a trend resumption type of bear trend day.

The Emini reversed down from above yesterday’s high. After a high 4/5 buy setup at the bottom of yesterday’s wedge bull channel and 60 minute moving average, it entered a trading range. It then reversed up from a lower low major trend reversal, but the rally was weak.

It sold off in the final hour for a trend resumption bear trend and an outside down day. The selling was climactic, but there was no sign of a bottom. If it gaps down tomorrow, it will form a 3 day island top. There is a 50% chance of follow-through selling for the 1st hour or two. There is a 40% chance of a bear trend day after today’s strong selloff from the middle of the 2 month trading range.

There is no sign of a bottom, and the final hour’s sell climax might not be enough to make traders look to buy on the open tomorrow. They would prefer to see a double bottom before buying. If there is a strong reversal up on the open, they will buy, but it is more likely that the bulls will need a base before there is a swing up.