After a gap down and a big bear bar, the Emini was in a trading range open. The 2nd bar of the day was the biggest bear bar in 100 bars. That makes it more likely an exhaustive end of the bear trend than the start of a new leg down. However, if the Emini begins to have a series of bear bars closing on their lows, today could be a big bear trend day. With the reversals and prominent tails, and after 2 sideways days, it will more likely be a trading range day. Traders will be quick to take profits. They will buy low and sell high. If a leg is strong, they will wait for a 2nd entry. If the context is good, they might hold part of their position for a swing up or down. A trading range day has 2 or more swings lasting 1 – 4 hours, and the swings are often channels with lots of pullbacks. Many traders prefer repeated scalps.

At the moment, the Emini is Always In Short, but unless the bears are able to get consecutive strong trend bars and persistent selling, the odds favor a trading range day.

After 14 consecutive bars in a bull micro channel on the 120 minute chart, which has not happened in over 1,000 bars, there was a 90% chance of a pullback yesterday. It came, and an extreme buy climax like that is usually followed by about a TBTL Ten Bar Two Legged correction that is sideways to down. By the end of the day, the 120 minute chart was in a 7 bar tight trading range. With an hour to go before the NYSE opens, it is down 5 points in the Globex session, and appears to be extending the trading range.

If a trading range grows to 20 or more bars, the trend that led to it is so far in the past that it loses influence. The Emini is then in BOM BreakOut Mode, and it has close to a 50% chance of a breakout up or down. That is not the case on the 120 or 240 minute charts. In fact, the 240 minute chart had only a 7 bar bull micro channel, which is not particularly extreme, and instead represents a strong bull trend. The odds are that the selloff that began yesterday will last another day or two, and then the Emini will resume its test of the February 1 lower high, which was a 50% pullback from the January bear trend.

Can the rally simply be a lower high in a bear channel on the daily chart? Well, it is, but the odds still favor at least a little more up after such a strong reversal. The market is trying to find a bottom for this bull flag. Since it is forming within a month long trading range, it could fall very far down in the range before it begins its 2nd leg up.

Because the odds favor buyers below and then a 2nd leg up, traders will be looking for buy setups today and Monday. However, since the pullback could easily last for several days, they will also be willing to sell if there is a strong bear breakout or a reasonable sell setup. There is support at the gap below Monday’s low down to 1892.50, and then major support below is at the February 10 high that was around 1880. That was the breakout point for the rally, and it is also around the bottom of the February 16 pullback and gap up.

The EURUSD daily chart has had 4 consecutive dojis bars after 2 strong days down from 2 legs up on the daily chart. Those doji bars are a sign of a loss of bear momentum and are probably the start of a transition into a trading range. The pullback is testing the December 15 top of the 1st leg up at around 1.1050 and the February 8 pullback low at around 1.1100.

On the 240 minute chart, the bulls see the bear channel as a bull flag and a test of support. The micro double bottom of the past 6 bars created a wedge bull flag, where the 1st push down was either the February 8 or 10 low. Since the 7 day bear channel is tight, the odds are that any bull breakout will probably be a minor reversal. A minor reversal is a leg in a trading range. This means that the 1st rally will probably be limited to a couple of days, maybe to the 1.1200 top of the 4 doji days, and then followed by a test back down to this level.

By the end of yesterday, there was a relatively flat (weak) tight bear channel in the 60 minute chart. Overnight, the 60 minute chart has been sideways. It had its 3rd reversal up an hour ago, and the NYSE opens in 30 minutes. The bulls are trying to end the selloff. Bears are beginning to take profits at new lows, and bulls are buying new lows more aggressively. Day traders have been scalping for 4 days. This overnight price action is an attempt to begin a 2 – 3 day rally. Day traders will be looking for a strong bull breakout for a swing trade up for a few days.

Whenever the odds begin to favor something (here, a rally), it means that the opposite (a strong bear breakout) is a low probability event. Low probability events are potential Pain Trades. That means that if the bears get a breakout, it could be strong and relentless because too many traders will be looking to buy any selloff. The result is that there could be a lot of trapped early bulls, and this can cause of big bear trend. While it is unlikely, day traders need to swing trade shorts if this is what we get. 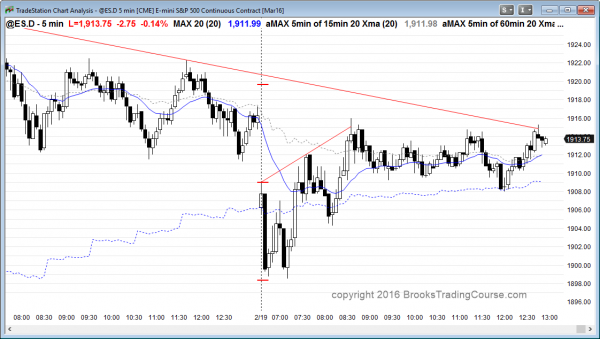 The Emini gapped down, but reversed up from a double bottom. After a 3 hour trading range, it had weak trend resumption up.

After a 14 bar bull micro channel on the 120 minute chart, the Emini has been sideways to down in a tight channel for about 10 bars. This might be the end of the pullback. The odds favor trend resumption up to test the lower high at 1940. There might be another day or two of a pullback before the next leg up, but bulls will be looking to buy soon.

The bears want the rally to be just another bull leg in a bear trend started in July. However, the 4 day rally was strong enough so that this pullback will probably be bought and the Emini will probably test 1940 next week before the bears can regain control, if they regain control before a test of the all-time high. The odds still favor the bears after a brief rally next week.