The Emini gapped down, but entered a tight trading range. Both bull and bear limit order scalpers made money, increasing the chances for a lot of trading range price action today. Neither has much conviction, but both are making money scalping.

The reversal up from below yesterday’s low was strong enough to make an early swing up likely. However, since most days over the past 3 weeks have had at least one opposite swing, that will probably be true today as well. Also, the reversal up was not especially strong, which increases the chances of an early trading range. The Emini is Always In Long, and it will probably test up to yesterday’s close. However, the hesitation and tails increase the chances of a weaker rally, like a broad bull channel with deep pullbacks. So far, this is a bull swing, but not a strong bull trend.

The bears want an opening reversal down from the moving average, but the odds are that the 1st selloff will be bought.

The Emini is continuing to search for the bottom of the developing trading range on the daily chart. The selloff from the April high has lacked consecutive big bear bars closing on their lows. It is still in the April Final Flag, and one reasonable target it the bottom of the Final Flag that is the April 7 low of 2026. That is also the low of last month.

Last month was a sell signal bar for a failed breakout to a new all-time high. It had a bull body and it followed 2 strong candlesticks up. The weekly chart had an 11 bar bear micro channel. These factors make a bear trend unlikely. The odds are that this 3 week selloff is a bull flag and that it will be followed by at least one more test of the July high. Since the February was so big, the correction down might last 20 or more bars. Also, the first reversal up might get sold after so many bars down. This make a trading range over the next several weeks likely.

Since a bear breakout below an 11 bar bull micro channel usually only corrects down for 1 – 3 bars, this selloff is probably going to end within a week or so. However, the rally up might fail around April’s high, after such a big pullback. The Emini is probably forming another trading range on the daily chart, like it has done many times in the past 2 years, which was also a big trading range.

The Emini is down 14 points in the Globex session, and it might gap below yesterday’s low. However, the Emini has been unable to create strong bear trend bars during this 3 week pullback. Most days have had at least one swing up and one swing down. The odds are that this will continue.

The Emini is getting close to the April low, and the odds are that it will not be able to escape the gravitational pull of that support. This means that the Emini will probably have to fall below the April low to see if there are buyers or sellers there. It might wait for Friday’s unemployment report before testing below that support.

Day traders have had lots of good trading for several weeks. Most days have had at least 2 swing trades. Day traders will expect this to continue. Many of the swings have begun without strong signal bars, but all became clear within a few bars of reversing. It is almost always a higher probability trade to enter after a strong reversal takes place instead of on the very 1st bar of the reversal. Day traders will look for buy reversal bars at support, sell reversal bars at resistance, 2nd entry buy and sells when entering a reversal trade after a strong leg, and strong breakouts breakouts.

The bulls are hoping for a double bottom with the April 29 low on the 60 minute chart. However, a reversal really does not change the trading range look of the selloff. There is no sense that the price is wrong and that the Emini has to move quickly to find a better price. It is simply drifting up and down, probing minor support and resistance.
The bulls and bears are looking for a strong reversal up or a strong bear breakout before they will conclude that the 3 week selloff has ended. In the meantime, they will continue to mostly scalp and they will mostly use limit orders. They are ready to swing trade at any time. 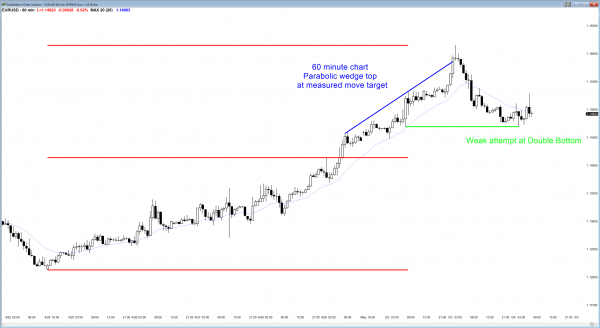 The 60 minute EURUSD Forex chart is trying to form a double bottom, but the signal bar and reversal up have been weak.

Although yesterday was a sell signal bar near the top of the yearlong trading range on the EURUSD daily chart, it followed a 6 bar bull micro channel. This makes a minor reversal (a pullback) more likely that a major reversal (bear trend).

The selloff over the past 2 days on the 60 and 240 minute charts was strong. This is a Big Up, Big Down candlestick pattern, and it makes a trading range likely for at least a day or two more. The EURUSD Forex is trying to reverse up from a double bottom with the May 2 low, but there was no good buy signal bar and not strong bull reversal. Instead, the chart has been in a tight trading range for over 10 hours.

The 5 minute chart has been in a 60 pip range. This is big enough for day traders to scalp for 20 pips, but many will still only go for 10 pips. There was a Big Up, Big Down reversal over the past 2 hours, and that usually is followed by a trading range.

The reversal bar on the daily chart shows the same price action. The EURUSD Forex traded up, and then down. However, when that happens in a strong swing up, the odds of the EURUSD going sides ways for several bars are higher than the odds of a bear trend. The bears usually need at least a micro double top before they have a reasonable chance of a major top.

Those who trade the markets for a living know this, and they expect that the EURUSD Forex will probably not fall too much further before bouncing. They also know that the 2 day selloff was strong, so they expect the 1st reversal up to be sold. When day traders think that there is not much risk of a big move up or down, they tend to BLSHS, Buy Low, Sell High, and Scalp. The result is a trading range, and that is what is likely today. 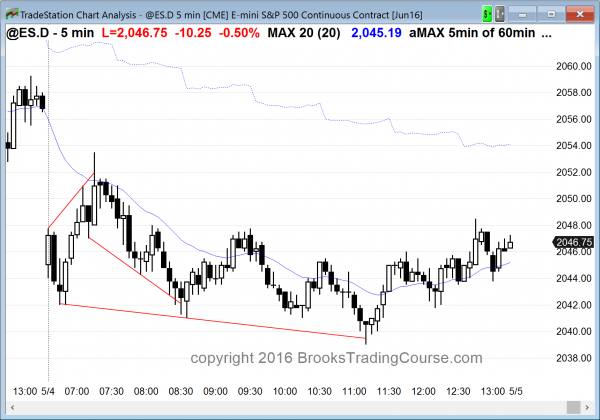 The Emini was in a broad bear channel, and then reversed up from a wedge bottom.

The Emini traded down in a broad bear channel today, but reversed up from a failed breakout below a wedge bottom. The selloff on the 60 minute and daily charts has lacked consecutive big bear bars and relentless selling. This makes it more likely a pullback instead of the start of a bear trend.

The Emini still probably has to test the April low at 2026 within the next few days. Since that would trigger a monthly sell signal and the sell signal is weak, there probably will be buyers below that level.

This price action lacks conviction. There is no sense that the price if far from wrong. The Emini will continue to probe down until the buyers have decided it fell too far. That probably will be within the next few days. Until then, almost every day has had a lot of trading range price action with both swings up and down. That will probably be true tomorrow as well.