As I expected, the Emini went above the February 1 lower high early today. It is Always In Long and in a trend from the open bull trend. Five of the 1st 6 bars were small, which is a sign of trading range price action. A big gap up that rallies on the open usually rallies for about an hour and then the Emini goes sideways for 2 or more hours. That might be what happens today. Many traders are hesitant to buy this far above the average price (the moving average) when there is a lot of trading range price action. Instead, they wait to buy a reversal up from near the moving average.

However, it is still okay to be holding long until there is a clear, strong reversal down. The odds favor a trading range soon and for the market to go mostly sideways for a couple of hours until it gets closer to the moving average. It would then choose between trend resumption up and trend reversal down. If the bulls are able to keep it from touching the moving average for the first 2 – 4 hours, the odds favor a bull trend day.

The bears want the breakout above the February 1 lower high to fail, but the breakout and follow-through have been strong enough to make the 1st reversal down to likely be followed by a trading range instead of a bear trend. The bears need a strong reversal down and a series of bear bars. Without that, they will have to wait for a trading range to create a major trend reversal, which would take at least a couple of hours.

I’m going to begin with an “I told you so,” but then continue onto confusion. I wrote on Wednesday that there was a 14 bar bull micro channel on the 120 minute chart and that this had not happened in over 1,000 bars (more than a year). I said that this was unsustainable and therefore climactic. This created a brief window of high probability trading.

I wrote that a 2 or more day pullback would begin on Thursday, and that it would be followed by a test of the February 1 lower high of 1940. At the end of Friday, I then said that the pullback might have ended on Friday, but that it might last longer. With an hour to go before the NYSE opens, the Emini is up 20 points and above last week’s high. This strength means that the bulls are getting their trend resumption.

There is an important other element to an extreme micro channel that I addressed as well. Sixty percent of the time, the trend resumption is brief and the move to the new high usually fails within a few bars, and then a bigger correction begins. That means that today’s test of the 1940 area might have a 60% chance of failing today or tomorrow and for the Emini to begin a bigger pullback. What is bigger? Usually TBTL.

However, the Emini just completed a TBTL correction at the end of Friday. I said the Emini had to decide if Thursday’s micro double top on the 120 minute chart was the trend resumption from the bull micro channel, and that the 2 day pullback that followed was the TBTL correction. This is unclear. If the markets decides that the 11 bar tight trading range was all that the bulls needed to resume buying again, the Emini might break strongly above 1940 this week. Because of this, I think the odds of a failure at 1940 and then a bigger pullback are more like 50% than 60%.

The bar on the monthly chart closes next Monday. The bulls want a strong reversal and a close on the high. The bears will try to create a pullback going into Monday so that there will be a big tail on the top of the Monthly bar. Trader’s should be ready for a reversal at any point before the end of the month. They should likewise be ready for a huge bull trend this week that would have the month end near January’s high above 2000. This should be an interesting week.

Why is 1940 so important? It is because it was a lower high on the daily chart that was followed by a very strong selloff. This makes it a major lower high, which means that swing bears theoretically have their stops just above it. If the Emini rallies above it, many traders will conclude that the bear trend on the daily chart since the 1st of the year has ended and that it has been replaced by either a trading range or a bull trend.

Even if it turns out to be a trading range, trading ranges have big swings. This means that the leg up could get back to the January high, which is about 100 points and 5% above where the Emini closed on Friday. That is a lot of room for fast money bulls to make a profit over the next couple of weeks.

Today will probably gap above Friday’s high. If the gap is big, the upside will probably be limited to an hour or so, and the Emini might have to drift sideways until it gets closer to the moving average. With the 1940 magnet so close and so important, today might instead be a strong trend from the open bull trend that simply rallies relentless far above the resistance level. If so, online day traders cannot be in denial. They need to look to buy and try to swing trade part of their position.

Because the Emini is testing an important resistance level, it could fail and the failure can begin on the 1st bar. Be prepared for a strong bear trend day as well. If there are a couple of big bear trend bars closing on their lows, they could be the start of a big bear trend day.

The potential for a trend day is higher than usual today and the trend can be either way. The momentum up gives the bulls a probability edge, but traders need to be ready for anything when the market is testing such important resistance, especially when the test is coming with such strong momentum. This increases the chances of success for the bulls.

The EURUSD 60 minute chart tried to bounce last week, but the bottom failed and there has been a strong bear breakout over the past 6 hours. The NYSE opens in 30 minutes. The breakout was a low probability event, which means that there are bulls who are trapped in and bears who are trapped out. Both will look for a bounce to sell. The bulls want to sell out with a smaller loss and the bears want to get short, knowing that there is at least a 60% chance of a 2nd leg down after any bounce.

The overnight selling has been in the form of a series of sell climaxes, which usually is followed by a trading range. However, the bounces after the breakouts stayed below the breakout points until a couple of hours ago, which means the the momentum down is still strong and the odds of much of a rally over the next couple of hours are small.

The rally from the 5:25 a.m. PST low went above the breakout point. This means that the bulls are starting to buy new lows and scale in lower, looking for scalps. It also means that the bears are taking profits at new lows instead of selling the breakouts. This is the first price action evidence that the breakout is weakening and that the EURUSD 5 minute chart will begin to enter a trading range for 2 or more hours.

With the momentum down as strong as it has been, it will be easier for most traders to make money by selling rallies today. However, because the gap down from the 4:35 a.m. selloff closed, bulls will be confident that subsequent breakouts to new lows will also pull back above breakout points and they will look to buy new lows or 10 – 20 pips below prior lows for 10 – 20 pips scalps.

Bears will sell 20 – 50 pip rallies, knowing that the best the bulls can probably get over the next several hours is a trading range and not a bull trend. 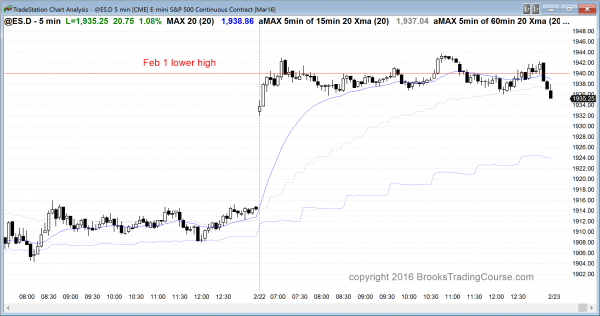 The Emini gapped up and rallied above the February 1 lower high of 1940.00, but spend the rest of the day in a tight trading range around that level. It sold off below the target into the close.

The 2 hour bull micro channel last week exhausted the bulls and they were not able to break strongly above the February 1 lower high. The daily chart is similar to the October breakout above the January 2015 lower high. The Emini went sideways for 4 days before it broke strongly above that resistance. It is too early to tell if today is the 1st of several sideways days. Day traders should be open to anything when the Emini is testing a major resistance level. It might break strongly above it, like in October, or it could reverse strongly down, as it did in May, 2008. Traders need more information before there will be a consensus about whether this bull breakout will success or reverse down.