The day opened with a 8 bar bear micro channel. However, the follow-though has not been strong. The entire leg down from yesterday’s high has had many bull bars, and it is therefore more likely a bull leg in what will become a trading range than a bear trend. A trading range trades down for 1 – 3 hours and then up for 1 – 3 hours. There is no bottom yet, but this selloff will probably end within the hour and be followed by a swing up. A trading range day is more likely than a trend day up or down.

Despite a strong rally on Friday, last week was a doji bar on the weekly chart and it was an outside bar with the prior bar also being a doji bar. These consecutive doji candlestick patterns are a sign that the Emini is in balance. The strong legs up and down have lacked follow-through. This is trading range price action. Until there is a breakout, there is no breakout, and the chance of a bull breakout to a new all-time high is still only about 50% or only a little higher.

The bears have repeatedly been able to stop the bulls below the July high. At some point, one side wins. There will either be a new all-time high or a test of the October low. However, even if there is new all-time high, it will probably fail within 100 points because the monthly chart is so overbought. The trading range of the past year will probably then be the final bull flag. If the Emini instead reverses down and breaks below the October low, the trading range of the past year will be a double top on the monthly chart.

The FOMC meeting next week is a catalyst. There have been many other catalysts this year, yet the Emini is still within a trading range. With everyone believing the Fed will raise interest rates and attach a statement to the effect that they will wait a long time before raising them again, this will not be news. It is already priced into the market. Anything other than that will be news. It does not matter what they do. The bulls already know how much money they will invest. The bears already know how much money they will invest. No one yet knows who has more money. We might find out before or just after the FOMC meeting next week.

If there is a strong bull breakout above the all-time high, even if it will probably fail within 5 bars on the monthly chart (5 months or so), traders should buy and not be in denial. Likewise, despite the strong rally last week and in October, if there is a strong reversal down, the bulls should not continue to hold onto longs. They should sell out of their positions. Traders who trade the markets for a living do not fight the market. Those learning how to trade the markets need to learn that price is truth, and they should not hold onto beliefs that are inconsistent with what the market is now doing.

The Fed has not raised interest rates since 2006. This is the longest stretch in history and therefore it is unsustainable and climactic. The monthly chart has been in a bull trend for 7 years, which is also unusual and therefore climactic. Whenever there is a climax and it reverses, as a guide, I look for about 10 bars and two legs in the opposite direction. A climax can last much longer than what seems possible. This one could go on for much longer. However, it is around historical maximums and therefore will likely have its year or two pullback soon.

The Emini has repeatedly tested the August 17 bear trend high, but it has continues to be resistance. If the Emini pulls back today, the month-long trading range will have 3 reversals down and therefore become a triangle. This is not helpful additional information because traders already see the past month as a trading range. It is a balanced market in breakout mode. The minimum target after a breakout is a measured move base on the height of the trading range. The range is about 100 points tall. That is why I think that a bull breakout will fail within about 100 points and not reach the 300 point target based on the yearlong trading range.

The Globex chart is down 4 points from Friday’s close and 10 points from its overnight high. Friday was a huge bull trend day, but it had 3 pushes up. A strong bull trend day that does not have any significant pullbacks is a buy climax. There is a 50% chance of follow-through buying for the 1st hour or two. There is a 75% chance of at least 2 hours of sideways to down trading that starts within the 1st 2 hours. There is only about a 25% chance of a strong bull trend day where the pullbacks are all less than 2 hours. Friday’s rally had 3 pushes and it ended just above the August bear trend high. This increases the chances that today will have an early high of the day around or below Friday’s high.

The EURUSD had a 400 pip rally on Friday that was a bull breakout above its month-long wedge bottom. The bears see the rally as simply a pullback to the breakout point, which is the bottom of the trading range that began in May. The bulls see it as a double bottom with the April low and therefore a reversal up from a double bottom higher low major trend reversal.

Trading ranges usually have pullbacks below the middle of the range. That means that many bulls will wait for about a 50% pullback from last week’s rally before buying again and creating is a 2nd leg up. The pullback might also last a week or two and have several smaller legs up and down within it. With the Fed possibly raising interest rates next week for the 1st time since 2006, the EURUSD might simply go sideways and wait to hear the Fed’s statement next week before beginning a 2nd leg up. 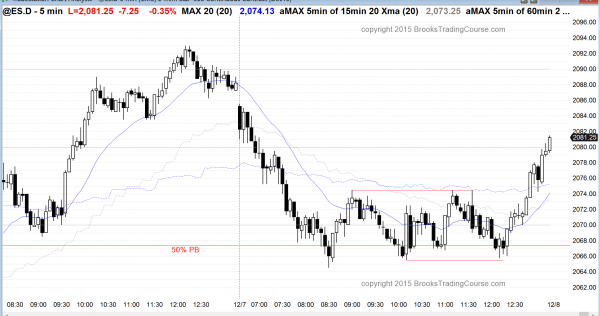 The Emini had a tight bear channel on the open, but repeatedly found support at the 50% pullback from Friday’s rally. It spent most of the day in a trading range where limit order traders scalped, and then reversed up at the end of the day.

The daily chart has been in a trading range for a month with several strong legs that failed to become breakouts. Today reversed down after Friday’s strong rally, but found support 4 times at the 50% retracement level from Friday’s rally. Because today was in a trading range after a strong initial selloff, bears will look for a 2nd leg down tomorrow and the bulls will want a continued trend reversal up. The odds favor more trading range price action, possibly until next week’s Fed announcement after the FOMC meeting.